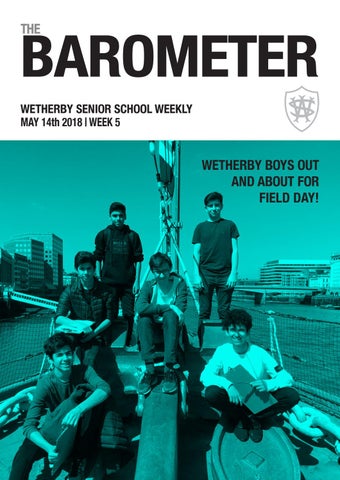 WETHERBY BOYS OUT AND ABOUT FOR FIELD DAY!

Dear Parents, I was lucky enough to be invited to attend the League Managers Association awards ceremony earlier this week. Unsurprisingly, Pep Guardiola’s achievements this year were recognised by his peers and he was voted both Premiership Manager of the season and also League Manager of the Year. Throughout this season, he has grabbed the headlines and Tuesday evening was no different. The most enjoyable part of the ceremony for me though was the recognition of the work of John Coleman, manager of Accrington Stanley, who led his side to the League 2 title despite having the second smallest budget in the league. The glamorous setting contrasted with the down to earth nature of John’s acceptance speech which made it clear that their success had been down to the commitment and effort of his players and the coaching team with whom John had worked for a long time. Without the big budgets of many football clubs, John’s philosophy has been clear – set your sights high, work hard and work together.

In the accompanying video reel, John’s commitment to his team and their success was uplifting and inspiring – his motivation was bringing out the best in those around him. Two very different challenges present themselves to the boys this week. Year 10 will spend the weekend in the Chilterns on their Bronze Duke of Edinburgh practice expedition. This award continues to be a fantastic opportunity for the boys and whilst for many the highlight is the challenge of this expedition, the opportunity to help others and to learn a new skill are also valuable parts of the award. As we move into the Sixth Form, the challenge will increase as boys have the opportunity to take on the Silver and Gold awards. I wish them and the accompanying staff the best for the weekend. The inter-Trib drama competition reaches its climax next week with an evening open to parents. A large number of boys have represented their Tribs in the preliminary rounds and I am looking forward to seeing the finalists perform on Wednesday evening.

I thank you all for your comments and wishes that have continued into this week. The School is in conversation with Papyrus, a charity that works to prevent suicide in young people. I will let you all know the details once plans are confirmed but it is important that before we embark on this next phase, we allow everyone some space and time to grieve and process what has happened. Best wishes,

FIELD DAY: YEAR 7 VISIT THE NATIONAL GALLERY Miss Kirk writes... As Year 7 bounded through Trafalgar Square, the sun beating down upon them and tourists buzzing left, right and centre, there was a palpable excitement in the air: the day ahead did not disappoint!  On arrival, the boys met the Art Historian who explained that the focus of their tour around the National Gallery would be ‘Narratives’. Beginning with Holbein’s ‘The Ambassadors’, the boys explored, often contributing perceptive and insightful interpretations, the painting’s ‘clues’ and inferred the ‘story’ which it could be seen as telling. A highlight for all was learning about the unique optical illusion of the skull, which has made this painting so world-famous. Moving onto a series of mythological paintings, the boys became increasingly confident in offering their own personal interpretations of the paintings and if we hadn’t mentioned a picnic in the sunshine, I think that the boys could have spent all afternoon touring the remaining rooms of the gallery! After some well-deserved running around over lunch, the boys returned to the gallery in small groups for the English-focused part of the day. Guided by a teacher, each group explored a

different collection of new paintings, discussing what sort of characters the people within them might be, looking for clues in their body language and in the scene surrounding them. The boys were informed before this activity that they would be producing their

own stories based on the people, places and things within the paintings they saw. Therefore, as each group toured the gallery, the boys pieced together ideas about the setting, characterisation and plot of their stories. Once fully inspired, the boys produced detailed character

profiles, which encouraged them to consider things such as what their protagonistâ&#x20AC;&#x2122;s greatest fear and ambition was, or who they were closest to in the world. It was delightful to observe the boys enjoying a hot-seating activity as their characters, as it was easy to identify the extent to which the paintings surrounding them had influenced their ideas. Finally, the boys produced a story plan, which they will be writing in the English lessons this term. A huge thank you to Miss Bradley for organising such a fantastic trip and to Mr Meyer and Mr Chidell for supporting us and the boys.

FIELD DAY: YEAR 8 LEARN LANGUAGES AT KCL Miss Suarez writesâ&#x20AC;Ś As part of Field Day, Year 8 boys, accompanied by Mr McFaul, Mrs Atkinson and Miss Suarez visited Kingâ&#x20AC;&#x2122;s College London for a language taster session. The boys had the chance to learn some Russian and Japanese and by the end of the day were able to introduce themselves and have a short conversation in both languages. The boys were rewarded for their effort and enthusiasm with some authentic snacks supplied by the university staff. Thanks so the great weather, they were also able to enjoy eating their lunch in the sunshine and fit in a few games of giant chess before heading back to school.

FIELD DAY: YEAR 10 PHYSICS TRIP Mr Dawson writes... As part of Field Day, some of the Year 10 physicists took part in trip to HMS Belfast and the Imperial War Museum where they got a chance to put some of their GCSE Physics calculations work into practice. Boys worked out how much of HMS Belfast needs to submerged in order to supports its weight and also how fast a WWII warship would recoil when it fired one of its 15'' guns. The boys also had a chance to tour both of these superb museums as well as sample the delights of Borough Market!

FIELD DAY: YEAR 10 HISTORIANS VISIT KENILWORTH Mr Warner writesâ&#x20AC;Ś On Field Day the Year 10 Historians struck out for Kenilworth Castle. As part of their GCSE, they will be

doing an independent research project on this castle over the summer and what better way to launch such an undertaking, than to visit the castle in the flesh?

On arrival the boys had a brief window to have a picnic and look around, before we met up with our guide, Sonia, who proceeded to give us a very detailed account of the castleâ&#x20AC;&#x2122;s history as she showed us around the site.

For those of you not familiar with Kenilworth, it is a fantastic old ruin. The remaining walls and towers are all made from the same pink sandstone and the whole

edifice still imparts a powerful sense that it is physically massive and would have been both an imposing presence within the landscape and a formidable fortress to besiege.

Following their tour, the boys should now be reading through their handouts on the castle and beginning to work on their summer projects.

YEAR 6 SCIENCE WORKSHOPS AT WSS On Friday 4th May, Wetherby Prep School sent their entire Year Six to a Science Workshop Day at the Senior School. The 62 boys were divided into four teams and given a general introduction to Senior School life, followed by four workshops, on rotation. These were Chemistry (looking at states of matter and the chemistry of food), Biology (dissecting a real lambâ&#x20AC;&#x2122;s heart), Forensics (taking fingerprints and investigating gathering and comparing prints), and Physics (how to make things fly, making gliders as part of the RAF 100 anniversary). The boys stayed for lunch, at which the sushi was a particular talking point! It was great for the staff at WSS to meet the new boys, and the boys certainly seemed to enjoy themselves.

DRAMA TRIP: BLOOD BROTHERS Miss Twomey writes... The infamous Blood Brothers by Willy Russell is the required set text for the boys studying GCSE Drama, and so it was with great anticipation that we travelled to the theatre to see their touring production. The plays follows the lives of the Johnstone twins, Mickey and Eddie, who are separated at birth and brought up on opposite sides of the economic divide. After reading and performing the play in lessons the boys were intrigued to see how the professionals would approach the script. The boys’ enthusiasm for the play and their excellent behaviour was complimented by members of the public, who were particularly impressed by their knowledge of the script! Watching this play raised interesting discussions about the ways in which the characters and scenes were presented and seeing the large cast performing complex scenes was exciting. We especially enjoyed the ‘I got ya, I shot ya’ playground scene and the final climactic moment which featured sound effects that made us all jump! The boys left with a great sense of pride, feeling that their interpretations of the play haven’t been too far off. Alex G even said, ‘I think our staging of the play in class was just as good!’

U14 A WSS vs St Benedict’s WSS: 73/7 St Benedicts: 74/4 St Benedicts win by 3 wickets Men of the Match: Jude B for his batting performance Finlay W for his bowling and fielding 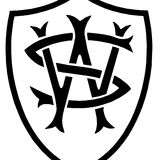 Catch up with all the news from this term's Field Day in this issue.

Catch up with all the news from this term's Field Day in this issue.