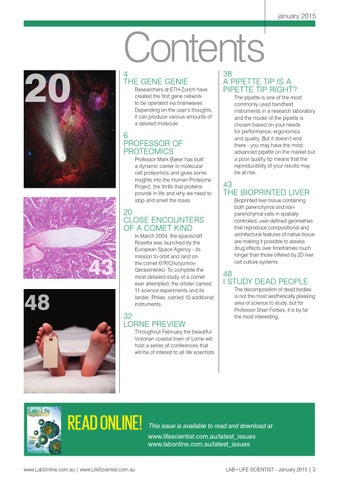 Researchers at ETH Zurich have created the first gene network to be operated via brainwaves. Depending on the userâ&amp;#x20AC;&amp;#x2122;s thoughts, it can produce various amounts of a desired molecule.

6 PROFESSOR OF PROTEOMICS Professor Mark Baker has built a dynamic career in molecular cell proteomics and gives some insights into the Human Proteome Project, the thrills that proteins provide in life and why we need to stop and smell the roses.

20 CLOSE ENCOUNTERS OF A COMET KIND

In March 2004, the spacecraft Rosetta was launched by the European Space Agency - its mission to orbit and land on the comet 67P/ChuryumovGerasimenko. To complete the most detailed study of a comet ever attempted, the orbiter carried 11 science experiments and its lander, Philae, carried 10 additional instruments.

38 A PIPETTE TIP IS A PIPETTE TIP RIGHT? The pipette is one of the most commonly used handheld instruments in a research laboratory and the model of the pipette is chosen based on your needs for performance, ergonomics and quality. But it doesnâ&amp;#x20AC;&amp;#x2122;t end there - you may have the most advanced pipette on the market but a poor quality tip means that the reproducibility of your results may be at risk.

43 THE BIOPRINTED LIVER Bioprinted liver tissue containing both parenchymal and nonparenchymal cells in spatially controlled, user-defined geometries that reproduce compositional and architectural features of native tissue are making it possible to assess drug effects over timeframes much longer than those offered by 2D liver cell culture systems.

48 I STUDY DEAD PEOPLE The decomposition of dead bodies is not the most aesthetically pleasing area of science to study, but for Professor Shari Forbes, it is by far the most interesting.

Throughout February the beautiful Victorian coastal town of Lorne will host a series of conferences that will be of interest to all life scientists.