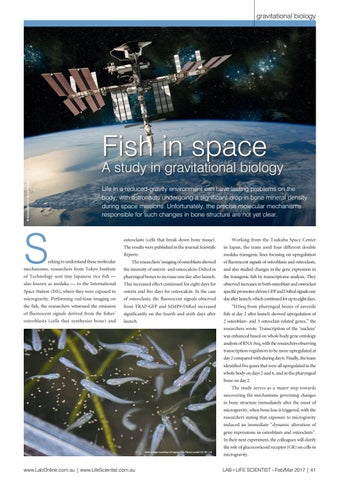 A study in gravitational biology Life in a reduced-gravity environment can have lasting problems on the body, with astronauts undergoing a significant drop in bone mineral density during space missions. Unfortunately, the precise molecular mechanisms responsible for such changes in bone structure are not yet clear.

Working from the Tsukuba Space Center

The results were published in the journal Scientific

eeking to understand these molecular

The researchers’ imaging of osteoblasts showed

of fluorescent signals of osteoblasts and osteoclasts,

and also studied changes in the gene expression in

pharyngeal bones to increase one day after launch.

the transgenic fish by transcriptome analysis. They

also known as medaka — to the International

This increased effect continued for eight days for

observed increases in both osteoblast and osteoclast

Space Station (ISS), where they were exposed to

osterix and five days for osteocalcin. In the case

of osteoclasts, the fluorescent signals observed

day after launch, which continued for up to eight days.

the fish, the researchers witnessed the emission

“HiSeq from pharyngeal bones of juvenile

of fluorescent signals derived from the fishes’

significantly on the fourth and sixth days after

fish at day 2 after launch showed upregulation of

osteoblasts (cells that synthesise bone) and

2 osteoblast- and 3 osteoclast-related genes,” the researchers wrote. Transcription of the ‘nucleus’ was enhanced based on whole body gene ontology analysis of RNA-Seq, with the researchers observing transcription-regulators to be more upregulated at day 2 compared with during day 6. Finally, the team identified five genes that were all upregulated in the whole body on days 2 and 6, and in the pharyngeal bone on day 2. The study serves as a major step towards uncovering the mechanisms governing changes in bone structure immediately after the onset of microgravity, when bone loss is triggered, with the researchers stating that exposure to microgravity induced an immediate “dynamic alteration of gene expressions in osteoblasts and osteoclasts”. In their next experiment, the colleagues will clarify the role of glucocorticoid receptor (GR) on cells in Fish image courtesy of yoppy (via Flickr) under CC BY 2.0