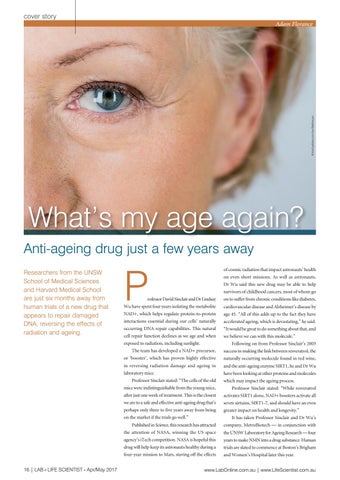 What’s my age again? Anti-ageing drug just a few years away Researchers from the UNSW School of Medical Sciences and Harvard Medical School are just six months away from human trials of a new drug that appears to repair damaged DNA, reversing the effects of radiation and ageing.

of cosmic radiation that impact astronauts’ health on even short missions. As well as astronauts, Dr Wu said this new drug may be able to help survivors of childhood cancers, most of whom go

cardiovascular disease and Alzheimer’s disease by

age 45. “All of this adds up to the fact they have

interactions essential during our cells’ naturally

accelerated ageing, which is devastating,” he said.

“It would be great to do something about that, and

cell repair function declines as we age and when

we believe we can with this molecule.”

exposed to radiation, including sunlight.

Following on from Professor Sinclair’s 2003

The team has developed a NAD+ precursor,

success in making the link between resveratrol, the

or ‘booster’, which has proven highly effective

in reversing radiation damage and ageing in

and the anti-ageing enzyme SIRT1, he and Dr Wu

have been looking at other proteins and molecules

Professor Sinclair stated: “The cells of the old

after just one week of treatment. This is the closest

seven sirtuins, SIRT1-7, and should have an even

perhaps only three to five years away from being

greater impact on health and longevity.”

on the market if the trials go well.”

which may impact the ageing process.

mice were indistinguishable from the young mice,

It has taken Professor Sinclair and Dr Wu’s

Published in Science, this research has attracted

company, MetroBiotech — in conjunction with

the attention of NASA, winning the US space

years to make NMN into a drug substance. Human

drug will help keep its astronauts healthy during a

trials are slated to commence at Boston’s Brigham

four-year mission to Mars, staving off the effects

and Women’s Hospital later this year.