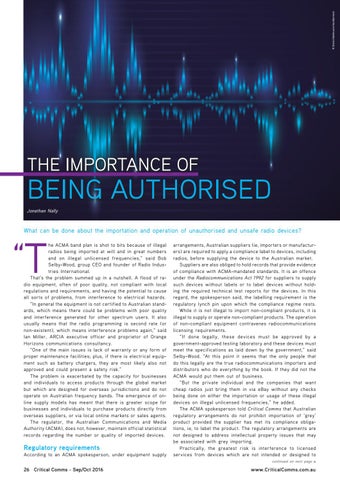 What can be done about the importation and operation of unauthorised and unsafe radio devices?

he ACMA band plan is shot to bits because of illegal radios being imported at will and in great numbers and on illegal unlicensed frequencies,” said Bob Selby-Wood, group CEO and founder of Radio Industries International. That’s the problem summed up in a nutshell. A flood of radio equipment, often of poor quality, not compliant with local regulations and requirements, and having the potential to cause all sorts of problems, from interference to electrical hazards. “In general the equipment is not certified to Australian standards, which means there could be problems with poor quality and interference generated for other spectrum users. It also usually means that the radio programming is second rate (or non-existent), which means interference problems again,” said Ian Miller, ARCIA executive officer and proprietor of Orange Horizons communications consultancy. “One of the main issues is lack of warranty or any form of proper maintenance facilities; plus, if there is electrical equipment such as battery chargers, they are most likely also not approved and could present a safety risk.” The problem is exacerbated by the capacity for businesses and individuals to access products through the global market but which are designed for overseas jurisdictions and do not operate on Australian frequency bands. The emergence of online supply models has meant that there is greater scope for businesses and individuals to purchase products directly from overseas suppliers, or via local online markets or sales agents. The regulator, the Australian Communications and Media Authority (ACMA), does not, however, maintain official statistical records regarding the number or quality of imported devices.

Regulatory requirements According to an ACMA spokesperson, under equipment supply

arrangements, Australian suppliers (ie, importers or manufacturers) are required to apply a compliance label to devices, including radios, before supplying the device to the Australian market. Suppliers are also obliged to hold records that provide evidence of compliance with ACMA-mandated standards. It is an offence under the Radiocommunications Act 1992 for suppliers to supply such devices without labels or to label devices without holding the required technical test reports for the devices. In this regard, the spokesperson said, the labelling requirement is the regulatory lynch pin upon which the compliance regime rests. While it is not illegal to import non-compliant products, it is illegal to supply or operate non-compliant products. The operation of non-compliant equipment contravenes radiocommunications licensing requirements. “If done legally, these devices must be approved by a government-approved testing laboratory and these devices must meet the specifications as laid down by the government,” said Selby-Wood. “At this point it seems that the only people that do this legally are the true radiocommunications importers and distributors who do everything by the book. If they did not the ACMA would put them out of business. “But the private individual and the companies that want cheap radios just bring them in via eBay without any checks being done on either the importation or usage of these illegal devices on illegal unlicensed frequencies,” he added. The ACMA spokesperson told Critical Comms that Australian regulatory arrangements do not prohibit importation of ‘grey’ product provided the supplier has met its compliance obligations, ie, to label the product. The regulatory arrangements are not designed to address intellectual property issues that may be associated with grey importing. Practically, the greatest risk is interference to licensed services from devices which are not intended or designed to continued on next page