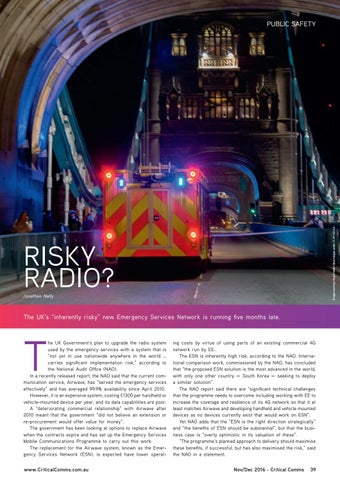 he UK Government’s plan to upgrade the radio system used by the emergency services with a system that is “not yet in use nationwide anywhere in the world … carries significant implementation risk,” according to the National Audit Office (NAO). In a recently released report, the NAO said that the current communication service, Airwave, has “served the emergency services effectively” and has averaged 99.9% availability since April 2010. However, it is an expensive system, costing £1300 per handheld or vehicle-mounted device per year, and its data capabilities are poor. A “deteriorating commercial relationship” with Airwave after 2010 meant that the government “did not believe an extension or re-procurement would offer value for money”. The government has been looking at options to replace Airwave when the contracts expire and has set up the Emergency Services Mobile Communications Programme to carry out this work. The replacement for the Airwave system, known as the Emergency Services Network (ESN), is expected have lower operat-

ing costs by virtue of using parts of an existing commercial 4G network run by EE. The ESN is inherently high risk, according to the NAO. International comparison work, commissioned by the NAO, has concluded that “the proposed ESN solution is the most advanced in the world, with only one other country — South Korea — seeking to deploy a similar solution”. The NAO report said there are “significant technical challenges that the programme needs to overcome including working with EE to increase the coverage and resilience of its 4G network so that it at least matches Airwave and developing handheld and vehicle mounted devices as no devices currently exist that would work on ESN”. Yet NAO adds that the “ESN is the right direction strategically” and “the benefits of ESN should be substantial”, but that the business case is “overly optimistic in its valuation of these”. “The programme’s planned approach to delivery should maximise these benefits, if successful, but has also maximised the risk,” said the NAO in a statement.