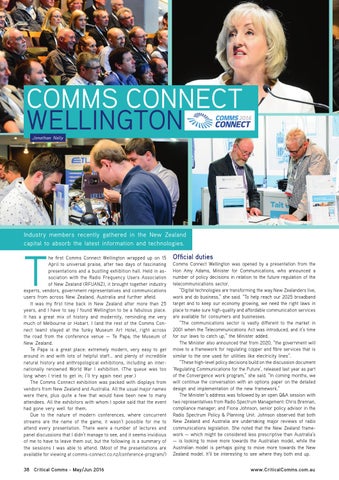 Industry members recently gathered in the New Zealand capital to absorb the latest information and technologies.

he first Comms Connect Wellington wrapped up on 15 April to universal praise, after two days of fascinating presentations and a bustling exhibition hall. Held in association with the Radio Frequency Users Association of New Zealand (RFUANZ), it brought together industry experts, vendors, government representatives and communications users from across New Zealand, Australia and further afield. It was my first time back in New Zealand after more than 25 years, and I have to say I found Wellington to be a fabulous place. It has a great mix of history and modernity, reminding me very much of Melbourne or Hobart. I (and the rest of the Comms Connect team) stayed at the funky Museum Art Hotel, right across the road from the conference venue — Te Papa, the Museum of New Zealand. Te Papa is a great place: extremely modern, very easy to get around in and with lots of helpful staff… and plenty of incredible natural history and anthropological exhibitions, including an internationally renowned World War I exhibition. (The queue was too long when I tried to get in; I’ll try again next year.) The Comms Connect exhibition was packed with displays from vendors from New Zealand and Australia. All the usual major names were there, plus quite a few that would have been new to many attendees. All the exhibitors with whom I spoke said that the event had gone very well for them. Due to the nature of modern conferences, where concurrent streams are the name of the game, it wasn’t possible for me to attend every presentation. There were a number of lectures and panel discussions that I didn’t manage to see, and it seems invidious of me to have to leave them out, but the following is a summary of the sessions I was able to attend. (Most of the presentations are available for viewing at comms-connect.co.nz/conference-program/)

Official duties Comms Connect Wellington was opened by a presentation from the Hon Amy Adams, Minister for Communications, who announced a number of policy decisions in relation to the future regulation of the telecommunications sector. “Digital technologies are transforming the way New Zealanders live, work and do business,” she said. “To help reach our 2025 broadband target and to keep our economy growing, we need the right laws in place to make sure high-quality and affordable communication services are available for consumers and businesses. “The communications sector is vastly different to the market in 2001 when the Telecommunications Act was introduced, and it’s time for our laws to catch up,” the Minister added. The Minister also announced that from 2020, “the government will move to a framework for regulating copper and fibre services that is similar to the one used for utilities like electricity lines”. “These high-level policy decisions build on the discussion document ‘Regulating Communications for the Future’, released last year as part of the Convergence work program,” she said. “In coming months, we will continue the conversation with an options paper on the detailed design and implementation of the new framework.” The Minister’s address was followed by an open Q&A session with two representatives from Radio Spectrum Management: Chris Brennan, compliance manager; and Fiona Johnson, senior policy advisor in the Radio Spectrum Policy & Planning Unit. Johnson observed that both New Zealand and Australia are undertaking major reviews of radio communications legislation. She noted that the New Zealand framework — which might be considered less prescriptive than Australia’s — is looking to move more towards the Australian model, while the Australian model is perhaps going to move more towards the New Zealand model. It’ll be interesting to see where they both end up.