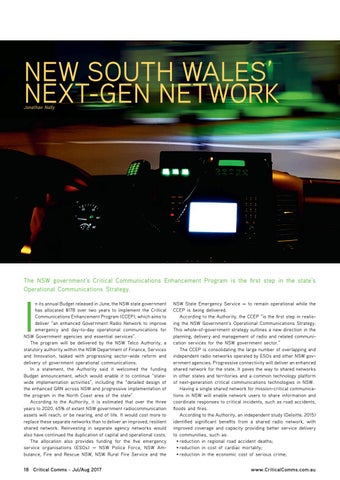 n its annual Budget released in June, the NSW state government has allocated $178 over two years to implement the Critical Communications Enhancement Program (CCEP), which aims to deliver “an enhanced Government Radio Network to improve emergency and day-to-day operational communications for NSW Government agencies and essential services”. The program will be delivered by the NSW Telco Authority, a statutory authority within the NSW Department of Finance, Services and Innovation, tasked with progressing sector-wide reform and delivery of government operational communications. In a statement, the Authority said it welcomed the funding Budget announcement, which would enable it to continue “statewide implementation activities”, including the “detailed design of the enhanced GRN across NSW and progressive implementation of the program in the North Coast area of the state”. According to the Authority, it is estimated that over the three years to 2020, 65% of extant NSW government radiocommunication assets will reach, or be nearing, end of life. It would cost more to replace these separate networks than to deliver an improved, resilient shared network. Reinvesting in separate agency networks would also have continued the duplication of capital and operational costs. The allocation also provides funding for the five emergency service organisations (ESOs) — NSW Police Force, NSW Ambulance, Fire and Rescue NSW, NSW Rural Fire Service and the

NSW State Emergency Service — to remain operational while the CCEP is being delivered. According to the Authority, the CCEP “is the first step in realising the NSW Government’s Operational Communications Strategy. This whole-of-government strategy outlines a new direction in the planning, delivery and management of radio and related communication services for the NSW government sector.” The CCEP is consolidating the large number of overlapping and independent radio networks operated by ESOs and other NSW government agencies. Progressive connectivity will deliver an enhanced shared network for the state. It paves the way to shared networks in other states and territories and a common technology platform of next-generation critical communications technologies in NSW. Having a single shared network for mission-critical communications in NSW will enable network users to share information and coordinate responses to critical incidents, such as road accidents, floods and fires. According to the Authority, an independent study (Deloitte, 2015) identified significant benefits from a shared radio network, with improved coverage and capacity providing better service delivery to communities, such as: • reduction in regional road accident deaths; • reduction in cost of cardiac mortality; • reduction in the economic cost of serious crime;