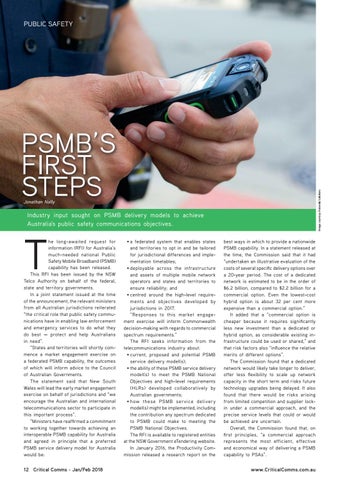 he long-awaited request for information (RFI) for Australia’s much-needed national Public Safety Mobile Broadband (PSMB) capability has been released. This RFI has been issued by the NSW Telco Authority on behalf of the federal, state and territory governments. In a joint statement issued at the time of the announcement, the relevant ministers from all Australian jurisdictions reiterated “the critical role that public safety communications have in enabling law enforcement and emergency services to do what they do best — protect and help Australians in need”. “States and territories will shortly commence a market engagement exercise on a federated PSMB capability, the outcomes of which will inform advice to the Council of Australian Governments. The statement said that New South Wales will lead the early market engagement exercise on behalf of jurisdictions and “we encourage the Australian and international telecommunications sector to participate in this important process”. “Ministers have reaffirmed a commitment to working together towards achieving an interoperable PSMB capability for Australia and agreed in principle that a preferred PSMB service delivery model for Australia would be:

• a federated system that enables states and territories to opt in and be tailored for jurisdictional differences and implementation timetables; • deployable across the infrastructure and assets of multiple mobile network operators and states and territories to ensure reliability; and • centred around the high-level requirements and objectives developed by jurisdictions in 2017. “Responses to this market engagement exercise will inform Commonwealth decision-making with regards to commercial spectrum requirements.” The RFI seeks information from the telecommunications industry about: • current, proposed and potential PSMB service delivery model(s); • the ability of these PSMB service delivery model(s) to meet the PSMB National Objectives and high-level requirements (HLRs) developed collaboratively by Australian governments; • how these PSMB service delivery model(s) might be implemented, including the contribution any spectrum dedicated to PSMB could make to meeting the PSMB National Objectives. The RFI is available to registered entities at the NSW Government eTendering website. In January 2016, the Productivity Commission released a research report on the

best ways in which to provide a nationwide PSMB capability. In a statement released at the time, the Commission said that it had “undertaken an illustrative evaluation of the costs of several specific delivery options over a 20-year period. The cost of a dedicated network is estimated to be in the order of $6.2 billion, compared to $2.2 billion for a commercial option. Even the lowest-cost hybrid option is about 32 per cent more expensive than a commercial option.” It added that a “commercial option is cheaper because it requires significantly less new investment than a dedicated or hybrid option, as considerable existing infrastructure could be used or shared,” and that risk factors also “influence the relative merits of different options”. The Commission found that a dedicated network would likely take longer to deliver, offer less flexibility to scale up network capacity in the short term and risks future technology upgrades being delayed. It also found that there would be risks arising from limited competition and supplier lockin under a commercial approach, and the precise service levels that could or would be achieved are uncertain. Overall, the Commission found that, on first principles, “a commercial approach represents the most efficient, effective and economical way of delivering a PSMB capability to PSAs”.