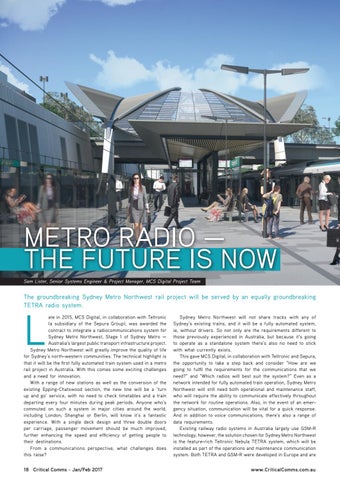 ate in 2015, MCS Digital, in collaboration with Teltronic (a subsidiary of the Sepura Group), was awarded the contract to integrate a radiocommunications system for Sydney Metro Northwest, Stage 1 of Sydney Metro — Australia’s largest public transport infrastructure project. Sydney Metro Northwest will greatly improve the quality of life for Sydney’s north-western communities. The technical highlight is that it will be the first fully automated train system used in a metro rail project in Australia. With this comes some exciting challenges and a need for innovation. With a range of new stations as well as the conversion of the existing Epping-Chatswood section, the new line will be a ‘turn up and go’ service, with no need to check timetables and a train departing every four minutes during peak periods. Anyone who’s commuted on such a system in major cities around the world, including London, Shanghai or Berlin, will know it’s a fantastic experience. With a single deck design and three double doors per carriage, passenger movement should be much improved, further enhancing the speed and efficiency of getting people to their destinations. From a communications perspective, what challenges does this raise?

Sydney Metro Northwest will not share tracks with any of Sydney’s existing trains, and it will be a fully automated system, ie, without drivers. So not only are the requirements different to those previously experienced in Australia, but because it’s going to operate as a standalone system there’s also no need to stick with what currently exists. This gave MCS Digital, in collaboration with Teltronic and Sepura, the opportunity to take a step back and consider “How are we going to fulfil the requirements for the communications that we need?” and “Which radios will best suit the system?” Even as a network intended for fully automated train operation, Sydney Metro Northwest will still need both operational and maintenance staff, who will require the ability to communicate effectively throughout the network for routine operations. Also, in the event of an emergency situation, communication will be vital for a quick response. And in addition to voice communications, there’s also a range of data requirements. Existing railway radio systems in Australia largely use GSM-R technology; however, the solution chosen for Sydney Metro Northwest is the feature-rich Teltronic Nebula TETRA system, which will be installed as part of the operations and maintenance communication system. Both TETRA and GSM-R were developed in Europe and are