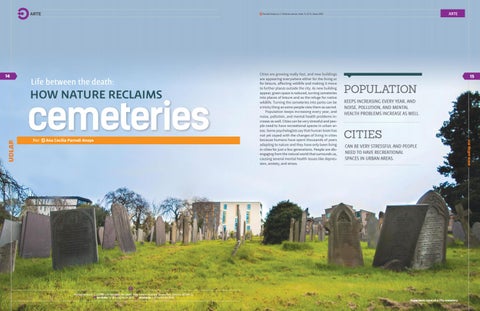 Life between the death:

Cities are growing really fast, and new buildings are appearing everywhere either for the living or for leisure, affecting wildlife and making it move to further places outside the city. As new building appear, green space is reduced, turning cemeteries into places of leisure and as the refuge for native wildlife. Turning the cemeteries into parks can be a tricky thing as some people view them as sacred. Population keeps increasing every year, and noise, pollution, and mental health problems increase as well. Cities can be very stressful and people need to have recreational spaces in urban areas. Some psychologists say that human brain has not yet coped with the changes of living in cities because humans have spent thousands of years adapting to nature and they have only been living in cities for just a few generations. People are disengaging from the natural world that surrounds us, causing several mental health issues like depression, anxiety, and stress.

CITIES CAN BE VERY STRESSFUL AND PEOPLE NEED TO HAVE RECREATIONAL SPACES IN URBAN AREAS.

Panoramic view of a city cemetery.

SOME OF THE MOST RELEVANT PRINCIPLES SO THAT CEMETERIES HELP BIODIVERSITY ARE NOT TO PRUNE TREES IN BIRDS BREEDING SEASON, SO THAT THEY ARE NOT DISTURBED NOR HOMELESS.

THE ORIGINAL PURPOSE OF THE CEMETERIES IS TO HAVE A PLACE FOR THE DEATH WITH A PROPER BURIAL AND A NICE LANDSCAPE SO THAT PEOPLE CAN MOURN THEIR FAMILIES, FRIENDS OR PEOPLE THEY KNEW.

Recreational spaces are needed in big cities, this gives the community a chance to play and rest. The truth is green spaces are needed for human health, some studies have shown that exposure to greenery helps improve the well-being of the individual and makes us less vulnerable to depression. Places like this will not only help humans but will also increase fauna population which again will help us regulate cities. The idea of making cemeteries into places of relaxation comes in handy when there is no more space for greenery in big cities, making cemeteries have a double function in society: one for religious purposes and the other as a public space to relax in hectic cities. The original purpose of the cemeteries is to have a place for the dead with a proper burial and a nice landscape so that people can mourn their families, friends or people they knew. But now a day, not all the people bury the dead in cemeteries nor they go to mourn anymore, leaving these spaces partly or entirely abandoned. For people having different views about cemeteries can arise a problem when making them a leisure area but even though different points of view may affect, we cannot deny that cemeteries are one of the greenest places in some cities, some people even say they are green lungs for the city. For example, the Oslo cemetery serves as lungs for the big city and some people even describe going there to relax and enjoy nature, some use it

to cross to the other side of the city when going to work but still enjoy going thru the cemetery rather than crossing through the street side. This cemetery is also an example of tolerance as they have divided the land for the Muslims to use and now they are starting to change the context of them from sacred to leisure by leaving some room for those that want to mourn the dead and the other half as a public space. Some cemeteries have been abandoned partially or completely leaving behind space for nature to take over. Hosting a great number of insects (beetles), mammals (bats), birds and plants, old cemeteries gather a collection of native species that are no longer found in the city, making them a potential place for the scientists to study native trees, plants, and animals, as well as old graveyard stones that accumulate a lot of lichen and fungi. It is easier for nature to reclaim abandoned areas because there is no one to take care of them or disturb them. Big cemeteries provide ecosystem services and help as safe passing points for animals to move from one place to another without encountering with the urban human life; this is very important for animals as they might get killed on the roads by cars, or bicycles. London cemeteries are a great example of biodiversity as they have allowed nature to reclaim what was once their home. In order to make cemeteries a home for nature, some governments have divided wooded

areas where there is no human interaction providing space and time for nature to reclaim those parts of the cemetery, wooded areas have a very important function since they provide shelter for native species that are affected due to the loss of green spaces in urban environments. In areas where people can spend their day, they are able to do some gardening but taking care of wildlife that lives there. For example, Natural England encourages some principle that can be applied to cemeteries. Some of the most relevant principles so that cemeteries help biodiversity are not to prune trees in birds breeding season, so that they are not disturbed nor homeless. Other principles include retaining some fallen branches or trees, if permitted and in safe areas, so that they help host more life; controlling invasive plants that are not allowing native plants to grow or that are affecting fences or stones, and planting new trees and shrubs where there are none or less fauna, not only to make it more appealing but to help spread biodiversity inside the cemetery. If all the cities begin to follow these norms in all their cemeteries on a regional scale, they could provide the same effect as parks or gardens, helping the ecosystem of cities and the health of human beings. Nature reclaiming of abandoned spaces is beneficial to everyone so in order to make cities greener. We need to let nature reclaim its territories. Ana Cecilia Parrodi Anaya (fotografías originales) Es licenciada en Diseño de Información Visual por la Universidad de las Américas Puebla y es maestra en Fotografía Biológica e Imagen por la Universidad de Nottingham. Ha ganado premios en fotografía y video en México y otros países. Actualmente se dedica a tomar fotografías de especies mexicanas. ana.parrodiaa@udlap.mx

Life between the death: how nature reclaims cemeteriee