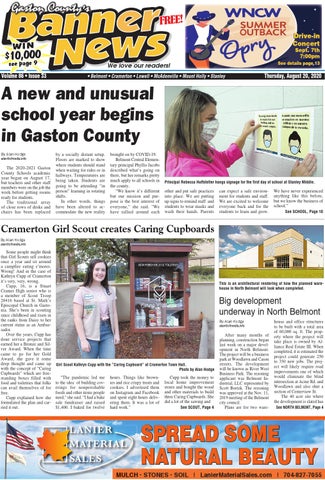 The 2020-2021 Gaston County Schools academic year began on August 17, but teachers and other staff members were on the job the week before getting rooms ready for students. The traditional array of close rows of desks and chairs has been replaced

by a socially distant setup. Floors are marked to show where students should stand when waiting for rides or in hallways. Temperatures are being taken. Students are going to be attending “in person” learning in rotating shifts. In other words, things have been altered to accommodate the new reality

brought on by COVID-19. Belmont Central Elementary principal Phyllis Jacobs described what’s going on there, but her remarks pretty much apply to all schools in the county. “We know it’s different but our mission and purpose is the best interest of everyone,” she said. “We have rallied around each

Principal Rebecca Huffstetler hangs signage for the first day of school at Stanley Middle. other and put safe practices into place. We are putting up signs to remind staff and students to wear masks and wash their hands. Parents

can expect a safe environment for students and staff. We are excited to welcome everyone back and for the students to learn and grow.

We have never experienced anything like this before, but we know the business of school.” See SCHOOL, Page 10

Some people might think that Girl Scouts sell cookies once a year and sit around a campfire eating s’mores. Wrong! And in the case of Kathryn Cupp of Cramerton it’s very, very, wrong. Cupp, 16, is a Stuart Cramer High senior who is a member of Scout Troop 20416 based at St. Mark’s Episcopal Church in Gastonia. She’s been in scouting since childhood and risen in the ranks from Daisy to her current status as an Ambassador. Over the years, Cupp has done service projects that earned her a Bronze and Silver Award. When the time came to go for her Gold Award, she gave it some deep thought and came up with the concept of “Caring Cupboards” which are freestanding boxes filled with food and toiletries that folks can avail themselves of for free. Cupp explained how she formulated the plan and carried it out.

This is an architectural rendering of how the planned warehouse in North Belmont will look when completed.

Girl Scout Kathryn Cupp with the “Caring Cupboard” at Cramerton Town Hall. Photo by Alan Hodge “The pandemic led me to the idea of building coverings for nonperishable foods and other items people need,” she said. “I had a bake sale fundraiser and raised $1,400. I baked for twelve

Cupp took the money to local home improvement stores and bought the wood and other materials to build three Caring Cupboards. She did a lot of the sawing and See SCOUT, Page 4

After many months of planning, construction began last week on a major development in North Belmont. The project will be a business park at Woodlawn and Cason streets. The development will be known as River West Business Park. The rezoning applicant was Belmont Industrial, LLC represented by Scott Bortzk. The rezoning was approved at the Nov. 11, 2019 meeting of the Belmont city council. Plans are for two ware-

house and office structures to be built with a total area of 60,000 sq. ft. The property where the project will take place is owned by Alliance Real Estate III. When completed, it is estimated the project could generate 250 to 350 new jobs. The project will likely require road improvements one of which would eliminate the blind intersection at Acme Rd. and Woodlawn and also shut a section of Centerview St. The 40 acre site where the development is slated has See NORTH BELMONT, Page 4