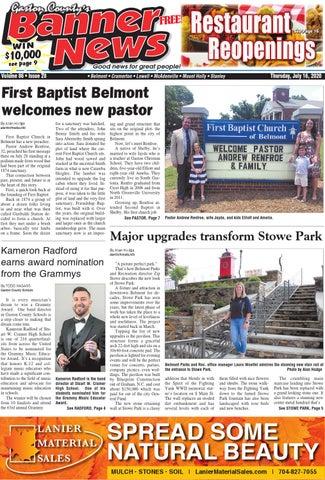 First Baptist Church in Belmont has a new preacher. Pastor Andrew Renfroe, 32, preached his first message there on July 28 standing at a podium made from wood that had been part of the original 1874 sanctuary. That connection between past, present, and future is at the heart of this story. First, a quick look back at the founding of First Baptist. Back in 1874 a group of about a dozen folks living in and near what was then called Garibaldi Station decided to form a church. At first they met under a brush arbor- basically tree limbs on a frame. Soon the desire

for a sanctuary was hatched. Two of the attendees, John Benny Smith and his wife Sara Abernethy Smith sprang into action. Sara donated the plot of land where the current First Baptist Church sits. John had wood sawed and stacked at the ancestral Smith farm in what is now Catawba Heights. The lumber was intended to upgrade the log cabin where they lived. Instead of using it for that purpose, it was taken to the little plot of land and the very first sanctuary, Friendship Baptist, was built with it. Over the years, the original building was replaced with larger and larger ones as the church membership grew. The main sanctuary now is an impos-

It is every musician’s dream to win a Grammy Award. One band director in Gaston County Schools is a step closer to making that dream come true. Kameron Radford of Stuart W. Cramer High School is one of 216 quarterfinalists from across the United States to be nominated for the Grammy Music Educator Award. It’s a recognition that honors K-12 and collegiate music educators who have made a significant contribution to the field of music education and advocate for maintaining music education in schools. The winner will be chosen from 10 finalists and attend the 63rd annual Grammy

ing and grand structure that sits on the original plot- the highest point in the city of Belmont. Now, let’s meet Renfroe. A native of Shelby, he’s married to wife Jayda who is a teacher at Gaston Christian School. They have two children, five-year-old Elliott and eight-year old Amelia. They currently live in South Gastonia. Renfro graduated from Crest High in 2006 and from North Greenville University in 2011. Growing up, Renfroe attended Second Baptist in Shelby. His first church job See PASTOR, Page 7

“A picture perfect park.” That’s how Belmont Parks and Recreation director Zip Stowe describes the new look of Stowe Park. A fixture and attraction in downtown Belmont for decades, Stowe Park has seen some improvements over the years, but the latest phase of work has taken the place to a whole new level of loveliness and usefulness. The project was started back in March. Topping the list of new upgrades is the pavilion. This structure forms a graceful arch 22-feet high and sits on a 30x40-foot concrete pad. The pavilion is lighted for evening events and will be the perfect venue for concerts, parties, company picnics, even weddings. The pavilion was built Kameron Radford is the band by Blueprint Construction director at Stuart W. Cramer out of Graham, N.C. and cost High School. One of his about $150,000 which was students nominated him for paid for out of the city Genthe Grammy Music Educator eral Fund. Award. The new stone retaining See RADFORD, Page 4 wall at Stowe Park is a classy

Belmont Parks and Rec. office manager Laura Woelfel admires the stunning new stair rail at the entrance to Stowe Park. Photo by Alan Hodge addition that blends in with the Spirit of the Fighting Yank WWII memorial statue’s location on S Main St. The wall replaces an eroded dirt embankment and has several levels with each of

them filled with nice flowers and shrubs. The stone walkway from the Fighting Yank down to the famed Stowe Park fountain has also been landscaped with rose beds and new benches.