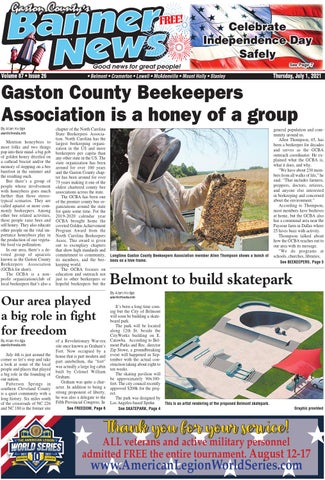 Gaston County Beekeepers Association is a honey of a group By Alan Hodge alan@cfmedia.info

Mention honeybees to most folks and two things pop into their mind- a big gob of golden honey drizzled on a cathead biscuit and/or the memory of stepping on a bee barefoot in the summer and the resulting ouch. But there’s a group of people whose involvement with honeybees goes much further than those stereotypical scenarios. They are called apiarist or more commonly beekeepers. Among other bee related activities, these people raise bees and sell honey. They also educate other people on the vital importance honeybees play in the production of our vegetable food via pollination. In our area, there’s a devoted group of apiarists known as the Gaston County Beekeepers Association (GCBA for short). The GCBA is a nonprofit organization/club of local beekeepers that’s also a

chapter of the North Carolina State Beekeepers Association. North Carolina has the largest beekeeping organization in the US and more beekeepers per capita than any other state in the US. The state organization has been around for over 100 years and the Gaston County chapter has been around for over 75 years making it one of the oldest chartered county bee associations across the state. The GCBA has been one of the premier county bee organizations around the state for quite some time. For the 2019-2020 calendar year GCBA brought home the coveted Golden Achievement Program Award from the North Carolina Beekeepers Assoc. This award is given out to exemplary chapters that show high standards and commitment to community, its members, and the beekeeping world. The GCBA focuses on education and outreach not just to other beekeepers or hopeful beekeepers but the

July 4th is just around the corner so let’s stop and take a look at some of the local people and places that played a big role in the founding of our nation. Patterson Springs in southern Cleveland County is a quiet community with a long history. Six miles south of the crossroads of NC 226 and NC 180 is the former site

general population and community around us. Allen Thompson, 65, has been a beekeeper for decades and serves as the GCBA outreach coordinator. He explained what the GCBA is, what it does, and why. “We have about 230 members from all walks of life,” he said. “That includes farmers, preppers, doctors, retirees, and anyone else interested in beekeeping and concerned about the environment.” According to Thompson, most members have beehives at home, but the GCBA also has a communal area near the Paysour farm in Dallas where 25 hives buzz with activity. Thompson talked about how the GCBA reaches out to our area with its message. “We do programs at schools, churches, libraries, See BEEKEEPERS, Page 5

of a Revolutionary War-era site once known as Graham’s Fort. Now occupied by a house that is part modern and part antebellum, the “fort” was actually a large log cabin built by Colonel William Graham. Graham was quite a character. In addition to being a strong proponent of liberty, he was also a delegate to the Fifth Provincial Congress. In See FREEDOM, Page 6

It’s been a long time coming but the City of Belmont will soon be building a skateboard park. The park will be located along 12th St. beside the CityWorks building on E. Catawba. According to Belmont Parks and Rec. director Zip Stowe, a groundbreaking event will happened in September with the actual construction taking about eight to ten weeks. The skating pavilion will be approximately 90x100feet. The city council recently approved $200k for the project. The park was designed by Los Angeles-based Spohn See SKATEPARK, Page 4

This is an artist rendering of the proposed Belmont skatepark. Graphic provided

Thank you for your service!