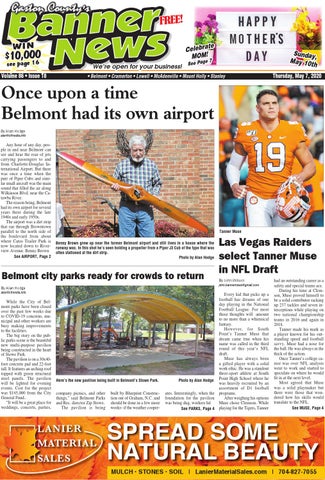 Once upon a time Belmont had its own airport By Alan Hodge alan@cfmedia.info

Any hour of any day, people in and near Belmont can see and hear the roar of jets carrying passengers to and from Charlotte-Douglas International Airport. But there was once a time when the purr of Piper Cubs and similar small aircraft was the main sound that filled the air along Wilkinson Blvd. near the Catawba River. The reason being, Belmont had its own airport for several years there during the late 1940s and early 1950s. The airport was a dirt strip that ran through Browntown parallel to the north side of the boulevard from about where Catos Trailer Park is now located down to Riverview Avenue. Benny Brown See AIRPORT, Page 2

Tanner Muse Benny Brown grew up near the former Belmont airport and still lives in a house where the runway was. In this shot he’s seen holding a propeller from a Piper J3 Cub of the type that was often stationed at the dirt strip. Photo by Alan Hodge

While the City of Belmont parks have been closed over the past few weeks due to COVID-19 concerns, municipal and other workers are busy making improvements to the facilities. The big story on the public parks scene is the beautiful new multi-purpose pavilion being constructed in the heart of Stowe Park. The pavilion is on a 30x40foot concrete pad and 22-feet tall. It features an arching roof topped with green structural steel panels. The pavilion will be lighted for evening events. Cost for the project was $145,000 from the City General Fund.. “It will be a great place for weddings, concerts, parties,

Here’s the new pavilion being built in Belmont’s Stowe Park. company picnics, and other things,” said Belmont Parks and Rec. director Zip Stowe. The pavilion is being

built by Blueprint Construction out of Graham, N.C. and should be done in a few more weeks- if the weather cooper-

Photo by Alan Hodge ates. Interestingly, when the foundation for the pavilion was being dug, workers hit See PARKS, Page 4

Every kid that picks up a football has dreams of one day playing in the National Football League. For most those thoughts will amount to no more than a whimsical fantasy. However, for South Point’s Tanner Muse that dream came true when his name was called in the third round of this year’s NFL draft. Muse has always been a gifted player with a solid work ethic. He was a standout three-sport athlete at South Point High School where he was heavily recruited by an assortment of D1 football programs. After weighing his options Muse chose Clemson. While playing for the Tigers, Tanner

had an outstanding career as a safety and special teams ace. During his time at Clemson, Muse proved himself to be a solid contributor racking up 237 tackles and seven interceptions while playing on two national championship teams in 2016 and again in 2018. Tanner made his mark as a player known for his outstanding speed and football savvy. Muse had a nose for the ball. He was always in the thick of the action. Once Tanner’s college career was over NFL analysts went to work and started to speculate on where he would fit in at the next level. Most agreed that Muse was a solid playmaker but there were those that wondered how his skills would translate to the NFL. See MUSE, Page 4