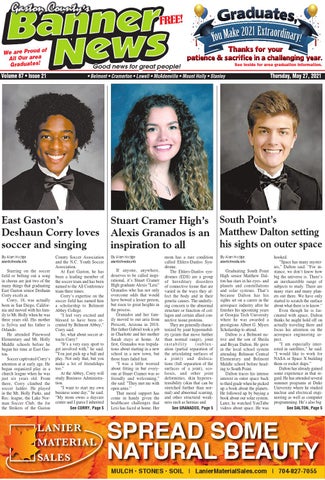 We are Proud of All Our area Graduates!

See inside for area graduation information.

Starring on the soccer field or belting out a song in chorus are just two of the many things that graduating East Gaston senior Deshaun Corry excels at. Corry, 18, was actually born in San Diego, California and moved with his family to Mt. Holly when he was three years old. His mother is Sylvia and his father is Orlando. He attended Pinewood Elementary and Mt. Holly Middle schools before he began his time at East Gaston. Soccer captivated Corry’s attention at at early age. He began organized play in a church league when he was just six years old. From there, Corry climbed the soccer ladder. He played in the Mt. Holly Parks. and Rec. league, the Lake Norman Soccer Club, the for the Strikers of the Gaston

County Soccer Association and the N.C. Youth Soccer Association. At East Gaston, he has been a leading member of the soccer team and has been named to the All Conference team three times. Corry’s expertise on the soccer field has earned him a scholarship to Belmont Abbey College. “I feel very excited and blessed to have been recruited by Belmont Abbey,” Corry said. So, what about soccer attracts Corry? “It’s a very easy sport to get involved with,” he said. “You just pick up a ball and play. Not only that, but you make a lot of friendships too.” At the Abbey, Corry will study Business Administration. “I want to start my own business some day,” he said. “My mom owns a daycare center and I guess I inherited See CORRY, Page 5

If anyone, anywhere, deserves to be called inspirational, it’s Stuart Cramer High graduate Alexis “Lexi” Granados who has not only overcome odds that would have bowed a lesser person, but risen to great heights in the process. Granados and her family moved to our area from Prescott, Arizona in 2018. Her father Gabriel took a job in Charlotte and her mother Sarah stays at home. At first, Granados was trepidatious about starting in a new school in a new town, but those fears faded fast. “I was a little worried about fitting in but everyone at Stuart Cramer was so friendly and welcoming,” she said. “They met me with open arms.” That moral support has come in handy given the healthcare challenges that Lexi has faced at home. Her

mom has a rare condition called Ehlers-Danlos Syndrome. The Ehlers-Danlos syndromes (EDS) are a group of hereditary disorders of connective tissue that are varied in the ways they affect the body and in their genetic causes. The underlying concern is the abnormal structure or function of collagen and certain allied connective tissue proteins. They are generally characterized by joint hypermobility (joints that move further than normal range), joint instability (subluxation (partial separation of the articulating surfaces of a joint)) and dislocations (full separation of the surfaces of a joint), scoliosis, and other joint deformities, skin hyperextensibility (skin that can be stretched further than normal) and abnormal scarring, and other structural weakness such as hernias and See GRANADOS, Page 5

Graduating South Point High senior Matthew Dalton has stars in his eyes- and planets and constellations and solar systems. That’s because Dalton has his sights set on a career in the aerospace industry after he finishes his upcoming years at Georgia Tech University where he was awarded a prestigious Albert G. Myers Scholarship to attend. Dalton is a Belmont native and the son of Sheila and Bryan Dalton. He grew in the local school system attending Belmont Central Elementary and Belmont Middle school before heading to South Point. Dalton traces his intense interest in outer space back to third grade when he picked up a book about the planets. He followed up by buying a book about our solar system. Later, he watched YouTube videos about space. He was

hooked. “Space has many mysteries,” Dalton said. “For instance, we don’t know how big the universe is. There’s an inexhaustible range of subjects to study. There are many stars and many planets out there. We have only started to scratch the surface about what there is to know.” Even though he is fascinated with apace, Dalton thinks he might hold off on actually traveling there and focus his attention on the aerospace engineering aspect. “I am especially interested in satellites,” he said. “I would like to work for NASA or Space X building them or rocket ships.” Dalton has already gained some experience in that regard. He has attended several summer programs at Duke University where he studied nuclear and electrical engineering as well as computer programming. He’s also big See DALTON, Page 5