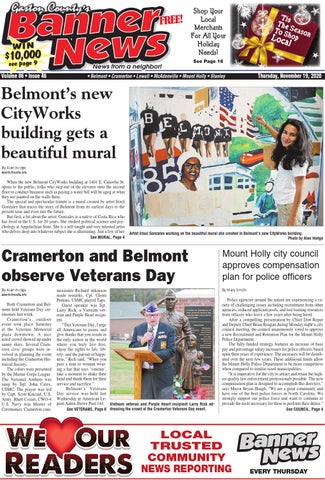 Shop Your Local Merchants For All Your Holiday Needs! See Page 16

When the new Belmont CityWorks building at 1401 E. Catawba St. opens to the public, folks who step out of the elevator onto the second floor to conduct business such as paying a water bill will be agog at what they see painted on the walls there. The special and spectacular feature is a mural created by artist Irisol Gonzalez that traces the story of Belmont from its earliest days to the present time and even into the future. But first, a bit about the artist. Gonzales is a native of Costa Rica who has lived in the U.S. for 20 years. She studied political science and psychology at Appalachian State. She is a self-taught and very talented artist who delves deep into whatever subject she is illustrating. Just a few of her See MURAL, Page 4

missioner Richard Atkinson made remarks. Cpl. Glenn Perkins, USMC played Taps. Guest speaker was Sgt. Larry Rick, a Vietnam veteran and Purple Heart recipient. “This Veterans Day, I urge all Americans to pause and give thanks that you reside in the only nation in the world where you truly live free, enjoy the rights to life, liberty, and the pursuit of happiness,” Rick said. “When you pass a man or woman wearing a hat that says ‘veteran’, take a moment to shake their hand and thank them for their service and sacrifice.” Belmont’s Veterans Day service was held last Wednesday at American Legion Auten-Stowe Post 144. Vietnam veteran and Purple Heart recipient Larry Rick adSee VETERANS, Page 6 dressing the crowd at the Cramerton Veterans Day event.

Police agencies around the nation are experiencing a variety of challenging issues including recruitment from other agencies, reduced applicant pools, and lost training resources from officers who leave a few years after being hired. After a compelling presentation by Chief Don Roper and Deputy Chief Brian Reagan during Monday night’s city council meeting, the council unanimously voted to approve a new Recruitment and Retention Plan for the Mount Holly Police Department. The fully-funded strategy features an increase of base pay and percentage salary increases for police officers, based upon their years of experience. The increases will be distributed over the next few years. These additional funds allow the Mount Holly Police Department to be more competitive when compared to similar-sized municipalities. “It is imperative for the city to attract and retain the highest quality law enforcement professionals possible. The new compensation plan is designed to accomplish this directive,” says Mayor Bryan Hough. “We are a great community and have one of the best police forces in North Carolina. We strongly support our police force and want to continue to provide the tools necessary for them to perform their duties.” See COUNCIL, Page 4