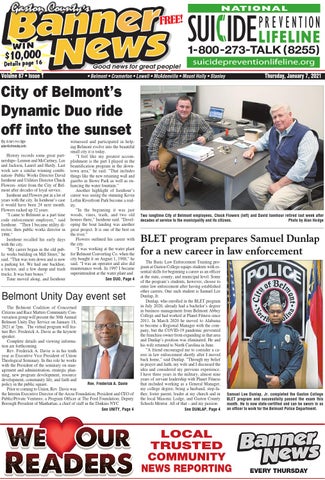 City of Belmont’s Dynamic Duo ride off into the sunset By Alan Hodge alan@cfmedia.info

History records some great partnerships- Lennon and McCartney, Lee and Jackson, Laurel and Hardy. Last week saw a similar winning combination- Public Works Director David Isenhour and Utilities Director Chuck Flowers- retire from the City of Belmont after decades of loyal service. Isenhour and Flowers put in a lot of years with the city. In Isenhour’s case it would have been 24 next month. Flowers racked up 32 years. “I came to Belmont as a part time code enforcement employee,” said Isenhour. “Then I became utility director, then public works director in 1998.” Isenhour recalled his early days with the city. “My career began in the old public works building on Mill Street,” he said. “That was torn down and is now a parking lot. We had one backhoe, a tractor, and a few dump and trash trucks. It was bare bones.” Time moved along, and Isenhour

witnessed and participated in helping Belmont evolve into the beautiful small city it is today. “I feel like my greatest accomplishment is the part I played in the beautification program in the downtown area,” he said. “That includes things like the new retaining wall and gazebo in Stowe Park as well as enhancing the water fountain.” Another highlight of Isenhour’s career was seeing the stunning Kevin Loftin Riverfront Park become a reality. “In the beginning it was just woods, vines, trash, and two old houses there,” Isenhour said. “Developing the boat landing was another great project. It is one of the best on the river.” Flowers outlined his career with the city. “I was working at the water plant for Belmont Converting Co. when the city bought it on August 1, 1988,” he said. “I was an operator and also did maintenance work. In 1997 I became superintendent at the water plant and See DUO, Page 4

Belmont Unity Day event set The Belmont Coalition of Concerned Citizens and Race Matters Community Conversation group will present the 30th Annual Belmont Unity Day Service on January 18, 2021 at 7pm. The virtual program will feature Rev. Frederick A. Davie as the keynote speaker. Complete details and viewing information are forthcoming. Rev. Frederick A. Davie is in his tenth year as Executive Vice President of Union Theological Seminary. In this role he works with the President of the seminary on management and administration, strategic planning, new program development, resource development, community life, and faith and Rev. Frederick A. Davie policy in the public square. Prior to coming to Union, Rev. Davie was the Interim Executive Director of the Arcus Foundation; President and CEO of Public/Private Ventures; a Program Officer at The Ford Foundation; Deputy Borough President of Manhattan; a chief of staff in the Dinkins NYC See UNITY, Page 4

Two longtime City of Belmont employees, Chuck Flowers (left) and David Isenhour retired last week after decades of service to the municipality and its citizens. Photo by Alan Hodge

BLET program prepares Samuel Dunlap for a new career in law enforcement The Basic Law Enforcement Training program at Gaston College equips students with essential skills for beginning a career as an officer at the state, county, and municipal level. Some of the program’s students, however, choose to enter law enforcement after having established other careers. One such student is Samuel Lee Dunlap, Jr. Dunlap, who enrolled in the BLET program in July 2020, already had a bachelor’s degree in business management from Belmont Abbey College and had worked at Planet Fitness since 2011. In March 2020 he moved to Alabama to become a Regional Manager with the company, but the COVID-19 pandemic prevented the franchise owner from expanding in that area and Dunlap’s position was eliminated. He and his wife returned to North Carolina in June. “A friend encouraged me to consider a career in law enforcement shortly after I moved back home,” said Dunlap. “Through my belief in prayer and faith, my wife and I discussed the idea and considered my previous experience. I have three years in the military, almost nine years of servant leadership with Planet Fitness that included working as a General Manager, my college degree, being a husband, step-father, foster parent, leader at my church and in the local Masonic Lodge, and Gaston County Schools Mentor. All of that – and my passion See DUNLAP, Page 4

Samuel Lee Dunlap, Jr. completed the Gaston College BLET program and successfully passed the exam this month. He is now state-certified and can be sworn in as an officer to work for the Belmont Police Department.