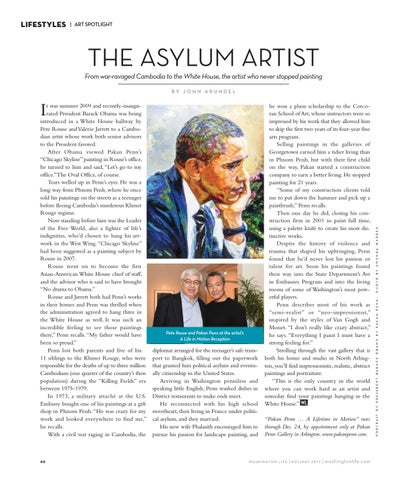 From war-ravaged Cambodia to the White House, the artist who never stopped painting

“Pakan Penn … A Lifetime in Motion” runs through Dec. 24, by appointment only at Pakan Penn Gallery in Arlington. www.pakanpenn.com.

diplomat arranged for the teenager’s safe transport to Bangkok, filling out the paperwork that granted him political asylum and eventually citizenship in the United States. Arriving in Washington penniless and speaking little English, Penn washed dishes in District restaurants to make ends meet. He reconnected with his high school sweetheart, then living in France under political asylum, and they married. His new wife Phalasith encouraged him to pursue his passion for landscape painting, and

he won a plum scholarship to the Corcoran School of Art, whose instructors were so impressed by his work that they allowed him to skip the first two years of its four-year fine arts program. Selling paintings in the galleries of Georgetown earned him a tidier living than in Phnom Penh, but with their first child on the way, Pakan started a construction company to earn a better living. He stopped painting for 21 years. “Some of my construction clients told me to put down the hammer and pick up a paintbrush,” Penn recalls. Then one day he did, closing his construction firm in 2001 to paint full time, using a palette knife to create his most distinctive works. Despite the history of violence and trauma that shaped his upbringing, Penn found that he’d never lost his passion or talent for art. Soon his paintings found their way into the State Department’s Art in Embassies Program and into the living rooms of some of Washington’s most powerful players. Penn describes most of his work as “semi-realist” or “neo-impressionist,” inspired by the styles of Van Gogh and Monet. “I don’t really like crazy abstract,” he says. “Everything I paint I must have a strong feeling for.” Strolling through the vast gallery that is both his home and studio in North Arlington, you’ll find impressionistic, realistic, abstract paintings and portraiture. “This is the only country in the world where you can work hard as an artist and someday find your paintings hanging in the White House.”

t was summer 2009 and recently-inaugurated President Barack Obama was being introduced in a White House hallway by Pete Rouse and Valerie Jarrett to a Cambodian artist whose work both senior advisors to the President favored. After Obama viewed Pakan Penn’s “Chicago Skyline” painting in Rouse’s office, he turned to him and said, “Let’s go to my office.” The Oval Office, of course. Tears welled up in Penn’s eyes. He was a long way from Phnom Penh, where he once sold his paintings on the streets as a teenager before fleeing Cambodia’s murderous Khmer Rouge regime. Now standing before him was the Leader of the Free World, also a fighter of life’s indignities, who’d chosen to hang his artwork in the West Wing. “Chicago Skyline” had been suggested as a painting subject by Rouse in 2007. Rouse went on to become the first Asian-American White House chief of staff, and the advisor who is said to have brought “No drama to Obama.” Rouse and Jarrett both had Penn’s works in their homes and Penn was thrilled when the administration agreed to hang three in the White House as well. It was such an incredible feeling to see those paintings there,” Penn recalls. “My father would have been so proud.” Penn lost both parents and five of his 11 siblings to the Khmer Rouge, who were responsible for the deaths of up to three million Cambodians (one quarter of the country’s then population) during the “Killing Fields” era between 1975-1979. In 1973, a military attaché at the U.S. Embassy bought one of his paintings at a gift shop in Phnom Penh. “He was crazy for my work and looked everywhere to find me,” he recalls. With a civil war raging in Cambodia, the