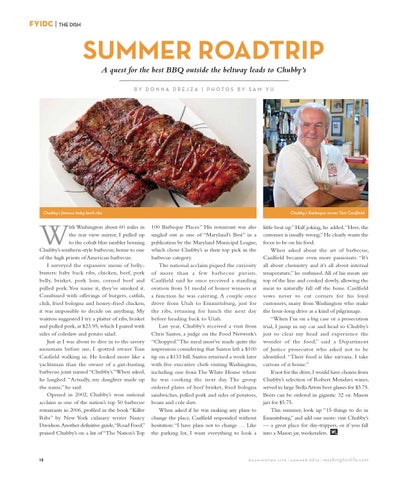 ith Washington about 60 miles in the rear view mirror, I pulled up to the cobalt blue rambler housing Chubby’s southern-style barbecue, home to one of the high priests of American barbecue. I surveyed the expansive menu of bellybusters: baby back ribs, chicken, beef, pork belly, brisket, pork loin, corned beef and pulled pork. You name it, they’ve smoked it. Combined with offerings of burgers, catfish, chili, fried bologna and honey-fried chicken, it was impossible to decide on anything. My waitress suggested I try a platter of ribs, brisket and pulled pork, at $23.95, which I paired with sides of coleslaw and potato salad. Just as I was about to dive in to the savory mountain before me, I spotted owner Tom Caufield walking in. He looked more like a yachtsman than the owner of a gut-busting barbecue joint named “Chubby’s.”When asked, he laughed. “Actually, my daughter made up the name,” he said. Opened in 2002, Chubby’s won national acclaim as one of the nation’s top 50 barbecue restaurants in 2006, profiled in the book “Killer Ribs” by New York culinary writer Nancy Davidson.Another definitive guide,“Road Food,” praised Chubby’s on a list of “The Nation’s Top

100 Barbeque Places.” His restaurant was also singled out as one of “Maryland’s Best” in a publication by the Maryland Municipal League, which chose Chubby’s as their top pick in the barbecue category. The national acclaim piqued the curiosity of more than a few barbecue purists. Caulfield said he once received a standing ovation from 51 medal of honor winners at a function he was catering. A couple once drove from Utah to Emmittsburg, just for the ribs, retuning for lunch the next day before heading back to Utah. Last year, Chubby’s received a visit from Chris Santos, a judge on the Food Network’s “Chopped.” The meal must’ve made quite the impression considering that Santos left a $100 tip on a $133 bill. Santos returned a week later with five executive chefs visiting Washington, including one from The White House where he was cooking the next day. The group ordered plates of beef brisket, fried bologna sandwiches, pulled pork and sides of potatoes, beans and cole slaw. When asked if he was making any plans to change the place, Caulfield responded without hesitation: “I have plans not to change … Like the parking lot, I want everything to look a

little beat up.” Half joking, he added, “Here, the customer is usually wrong.” He clearly wants the focus to be on his food. When asked about the art of barbecue, Caulfield became even more passionate. “It’s all about chemistry and it’s all about internal temperature,” he enthused. All of his meats are top of the line and cooked slowly, allowing the meat to naturally fall off the bone. Caulfield vows never to cut corners for his loyal customers, many from Washington who make the hour-long drive as a kind of pilgrimage. “When I’m on a big case or a prosecution trial, I jump in my car and head to Chubby’s just to clear my head and experience the wonder of the food,” said a Department of Justice prosecutor who asked not to be identified. “Their food is like nirvana. I take cartons of it home.” If not for the drive, I would have chosen from Chubby’s selection of Robert Mondavi wines, served in large Stella Artois beer glasses for $3.75. Beers can be ordered in gigantic 32 oz. Mason jars for $5.75. This summer, look up “15 things to do in Emmitsburg,” and add one more: visit Chubby’s — a great place for day-trippers, or if you fall into a Mason jar, weekenders.