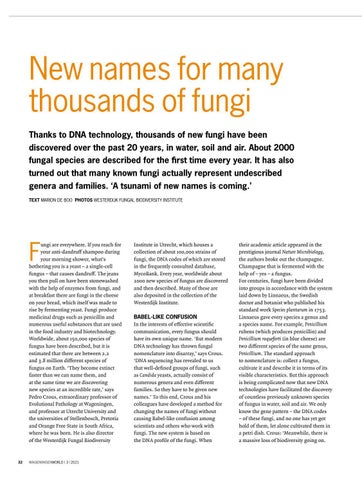 New names for many thousands of fungi Thanks to DNA technology, thousands of new fungi have been discovered over the past 20 years, in water, soil and air. About 2000 fungal species are described for the first time every year. It has also turned out that many known fungi actually represent undescribed genera and families. ‘A tsunami of new names is coming.’ TEXT MARION DE BOO PHOTOS WESTERDIJK FUNGAL BIODIVERSITY INSTITUTE

ungi are everywhere. If you reach for your anti-dandruff shampoo during your morning shower, what’s bothering you is a yeast – a single-cell fungus – that causes dandruff. The jeans you then pull on have been stonewashed with the help of enzymes from fungi, and at breakfast there are fungi in the cheese on your bread, which itself was made to rise by fermenting yeast. Fungi produce medicinal drugs such as penicillin and numerous useful substances that are used in the food industry and biotechnology. Worldwide, about 150,000 species of fungus have been described, but it is estimated that there are between 2.2 and 3.8 million different species of fungus on Earth. ‘They become extinct faster than we can name them, and at the same time we are discovering new species at an incredible rate,’ says Pedro Crous, extraordinary professor of Evolutional Pathology at Wageningen, and professor at Utrecht University and the universities of Stellenbosch, Pretoria and Orange Free State in South Africa, where he was born. He is also director of the Westerdijk Fungal Biodiversity

Institute in Utrecht, which houses a collection of about 100,000 strains of fungi, the DNA codes of which are stored in the frequently consulted database, MycoBank. Every year, worldwide about 2000 new species of fungus are discovered and then described. Many of these are also deposited in the collection of the Westerdijk Institute. BABEL-LIKE CONFUSION In the interests of effective scientific communication, every fungus should have its own unique name. ‘But modern DNA technology has thrown fungal nomenclature into disarray,’ says Crous. ‘DNA sequencing has revealed to us that well-defined groups of fungi, such as Candida yeasts, actually consist of numerous genera and even different families. So they have to be given new names.’ To this end, Crous and his colleagues have developed a method for changing the names of fungi without causing Babel-like confusion among scientists and others who work with fungi. The new system is based on the DNA profile of the fungi. When

their academic article appeared in the prestigious journal Nature Microbiology, the authors broke out the champagne. Champagne that is fermented with the help of – yes – a fungus. For centuries, fungi have been divided into groups in accordance with the system laid down by Linnaeus, the Swedish doctor and botanist who published his standard work Species plantarum in 1753. Linnaeus gave every species a genus and a species name. For example, Penicillium rubens (which produces penicillin) and Penicillium roqueforti (in blue cheese) are two different species of the same genus, Penicillium. The standard approach to nomenclature is: collect a fungus, cultivate it and describe it in terms of its visible characteristics. But this approach is being complicated now that new DNA technologies have facilitated the discovery of countless previously unknown species of fungus in water, soil and air. We only know the gene pattern – the DNA codes – of these fungi, and no one has yet got hold of them, let alone cultivated them in a petri dish. Crous: ‘Meanwhile, there is a massive loss of biodiversity going on.