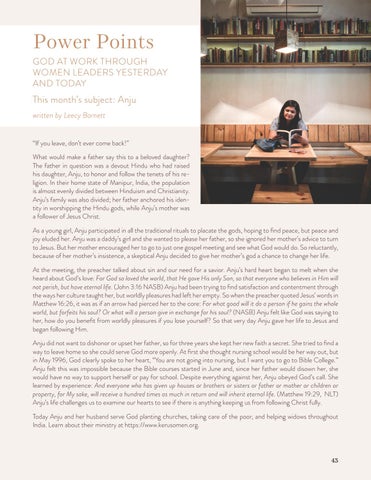 This month’s subject: Anju written by Leecy Barnett “If you leave, don’t ever come back!” What would make a father say this to a beloved daughter? The father in question was a devout Hindu who had raised his daughter, Anju, to honor and follow the tenets of his religion. In their home state of Manipur, India, the population is almost evenly divided between Hinduism and Christianity. Anju’s family was also divided; her father anchored his identity in worshipping the Hindu gods, while Anju’s mother was a follower of Jesus Christ. As a young girl, Anju participated in all the traditional rituals to placate the gods, hoping to find peace, but peace and joy eluded her. Anju was a daddy’s girl and she wanted to please her father, so she ignored her mother’s advice to turn to Jesus. But her mother encouraged her to go to just one gospel meeting and see what God would do. So reluctantly, because of her mother’s insistence, a skeptical Anju decided to give her mother’s god a chance to change her life. At the meeting, the preacher talked about sin and our need for a savior. Anju’s hard heart began to melt when she heard about God’s love: For God so loved the world, that He gave His only Son, so that everyone who believes in Him will not perish, but have eternal life. (John 3:16 NASB) Anju had been trying to find satisfaction and contentment through the ways her culture taught her, but worldly pleasures had left her empty. So when the preacher quoted Jesus’ words in Matthew 16:26, it was as if an arrow had pierced her to the core: For what good will it do a person if he gains the whole world, but forfeits his soul? Or what will a person give in exchange for his soul? (NASB) Anju felt like God was saying to her, how do you benefit from worldly pleasures if you lose yourself? So that very day Anju gave her life to Jesus and began following Him. Anju did not want to dishonor or upset her father, so for three years she kept her new faith a secret. She tried to find a way to leave home so she could serve God more openly. At first she thought nursing school would be her way out, but in May 1996, God clearly spoke to her heart, “You are not going into nursing, but I want you to go to Bible College.” Anju felt this was impossible because the Bible courses started in June and, since her father would disown her, she would have no way to support herself or pay for school. Despite everything against her, Anju obeyed God’s call. She learned by experience: And everyone who has given up houses or brothers or sisters or father or mother or children or property, for My sake, will receive a hundred times as much in return and will inherit eternal life. (Matthew 19:29, NLT) Anju’s life challenges us to examine our hearts to see if there is anything keeping us from following Christ fully. Today Anju and her husband serve God planting churches, taking care of the poor, and helping widows throughout India. Learn about their ministry at https://www.kerusomen.org. 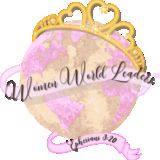