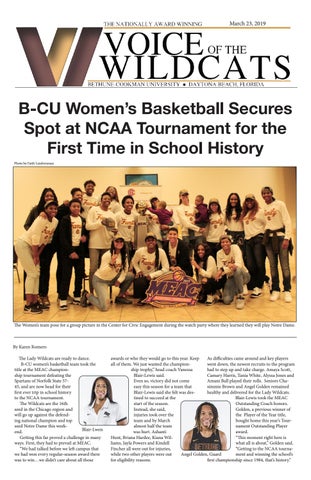 The Women’s team pose for a group picture in the Center for Civic Engagement during the watch party where they learned they will play Notre Dame.

By Karen Romero The Lady Wildcats are ready to dance. B-CU women’s basketball team took the title at the MEAC championship tournament defeating the Spartans of Norfolk State 5745, and are now head for their first ever trip in school history to the NCAA tournament. The Wildcats are the 16th seed in the Chicago region and will go up against the defending national champion and top seed Notre Dame this weekBlair-Lweis end. Getting this far proved a challenge in many ways. First, they had to prevail at MEAC. “We had talked before we left campus that we had won every regular-season award there was to win…we didn’t care about all those

awards or who they would go to this year. Keep As difficulties came around and key players all of them. We just wanted the championwent down, the newest recruits to the program ship trophy,” head coach Vanessa had to step up and take charge. Amaya Scott, Blair-Lewis said. Camary Harris, Tania White, Alyssa Jones and Even so, victory did not come Amani Ball played their rolls. Seniors Chaeasy this season for a team that simmie Brown and Angel Golden remained Blair-Lewis said she felt was deshealthy and delivered for the Lady Wildcats. tined to succeed at the Blair-Lewis took the MEAC start of the season. Outstanding Coach honors. Instead, she said, Golden, a previous winner of injuries took over the the Player of the Year title, team and by March bought home this year’s Touralmost half the team nament Outstanding Player was hurt. Ashanti award. Hunt, Briana Hardee, Kiana Wil“This moment right here is liams, Jayla Powers and Kindell what all is about,” Golden said. Fincher all were out for injuries, “Getting to the NCAA tournaAngel Golden, Guard while two other players were out ment and winning the school’s for eligibility reasons. first championship since 1984, that’s history.”

Team members take selfies and viedos while cheering in the Center for Civic Engagenent Center.

Ashanti Hunt shows off her championship rings in a photo opp.

The image that sent the team wild, revealing the team would appear at the NCAA tournament.

“Accomplishing something so historical is an amazing feeling. It’s been 35 years since Bethune’s woman’s basketball team has made an appearance to the NCAA tournament. The feeling of everyone congratulating you as you walk the campus or even around Daytona is a feeling of an all-time high” Scott said. “It’s a good feeling to make history and

to do something that’s never done before. It opens up opportunities for others to strive for the same goal. This feeling is amazing working so hard the past for years and to finally see it pay off. Being in this atmosphere is going to be incredible. I just want to stay in the moment and seize the opportunity. I believe the impact that we had on the Wildcat family and the entire community by going to the tournament will bring a tradition of winning to the university” Brown responded. Voice of the Wildcats

More from Voice of the Wildcats