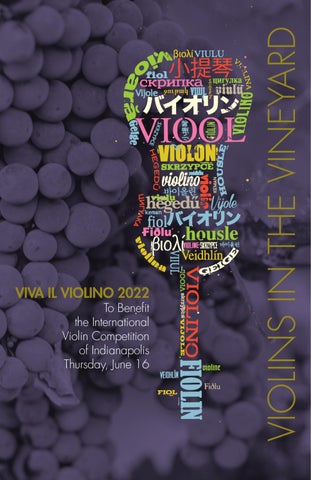 About The Indianapolis REMARKABLE PERFORMANCES, extraordinary prizes and a festival atmosphere characterize the International Violin Competition of Indianapolis (IVCI) as “the ultimate violin contest…” writes the Chicago Tribune. Laureates of The Indianapolis have emerged as outstanding artists in concert halls across the globe. For 17 days every four years, 40 of the world’s brightest talents come here to perform some of the most beautiful music ever written before enthusiastic audiences in venues throughout the city including the Eugene and Marilyn Glick Indiana History Center, the Howard L. Schrott Center for the Performing Arts and the Hilbert Circle Theatre, where the finalists collaborate with the Indianapolis Symphony Orchestra. Of the prizes awarded, one of the most significant is the four-year loan of a concert instrument from the Competition collection which comprises the 1683 “ex-Gingold” Stradivari violin and several modern instruments. Under the guidance of Thomas J. Beczkiewicz, Founding Director, and the late Josef Gingold, who had served on the juries of every major violin competition in the world, the IVCI became known by the musical and media communities as one of the world’s most compelling competitions. In 1994, the artistic leadership of this Competition passed from Gingold to his most famous pupil, Jaime Laredo, one of the master musicians of our time. Since 1982, Indianapolis has hosted 10 Competitions. It is a unique showcase for the world’s most gifted young violinists and a demonstration of Hoosier hospitality and American volunteerism. Regarded as the “Olympics of the Violin,” each Competition generates significant national and international media coverage for the artists and the state. Hundreds of volunteers work tirelessly to make this event possible. Through the performances of its Laureates, the influence of the Competition continues for years afterward in cities of the world far from Indianapolis. These Laureates uphold the tradition of quality and excellence which has made the International Violin Competition of Indianapolis one of the most prestigious music competitions in the world. The 11th Quadrennial will be held September 9-25, 2022.

Thanks to our World-class Sponsors

Successful bidders must pay on the evening of the event. Payment may be made with cash, check or credit card. All sales are final.

Payment must be made to the cashier. You will receive your certificate(s) or item(s) at time of payment.

It is the winner bidder’s responsibility to make arrangements with the auction donor where applicable. Please contact the donor by July 31, 2022, unless otherwise indicated. Please honor the restrictions and deadlines. Values of items are the donors’ estimate of the fair market value.

If the sales amount of the item exceeds the listed value, the difference between the value and the amount paid may be used as a tax deduction by the purchaser as a charitable contribution to the IVCI. We recommend you contact your tax advisor.

The IVCI reserves the right to withdraw any item for sale at any time and to reject any and all bids for any item.

All participants agree that neither the IVCI nor the IVCI Board of Directors, nor the VIVA Committee are accountable for any claims, liability or causes of actions arising from a transaction between a donor and a bidder. In the event of a dispute, an auction official shall act as the final authority and will determine the winning bidder.

Let the Italian theme of “Violins in the Vineyard” continue with this exclusive dining opportunity. Renowned Chef Regina Mehallick (RBistro and R2GO) will create a sumptuous 8-person dining experience for the winning bidder showcasing timpano. As highlighted in the 1996 film Big Night, timpano is a Sicilian pasta dish baked in a huge round bowl. It contains ziti, salami, meatballs, ragu sauce, hard boiled eggs and various cheeses. The timpano requires quite a bit of time (days!) and patience to prepare; but when you taste the finished product you’ll know it was worth it – especially when prepared by Chef Mehallick. A selection of fine wines from the Bennetts will complement the three course Italian feast. The backdrop for this dinner is the beautiful Westerley, home of Dawn and Tom Bennett, a nearly four-acre estate which showcases the sprawling gardens that overlook the White River and Central Canal. It is located in Golden Hill, an historic enclave near West 38th Street and Dr. Martin Luther King Jr. Street – an area known for its large, stately homes, designed by leading architects. The 9,500-square-foot Tudor style home was built in 1922 and became the property of George Clowes, Eli Lilly’s first research director, in 1933. Enjoy cocktails on the patio or stroll through the gardens before heading into the beautiful dining room for your unique Italian dining experience. Must be used by June 2023. Retail Value: $2,400 Donors: Dawn and Tom Bennett Viva il Violino 2022

Experience an unforgettable trip to Napa Valley. Pamper yourself with a threenight stay at the stunning new Alila Napa Valley. Start your adventure by visiting Handwritten Wines, a boutique winery located in beautiful Yountville. Handwritten’s Bread and Butter experience features 5 wines with a focus on the Napa Valley hillside and mountain District Cabernet Sauvignons. Then, be transported by the remarkable artistry of Grammy Award-winning violinist Joshua Bell and internationally acclaimed soprano Larisa Martínez. Be a special guest at their rehearsal for the Voice and the Violin concert presented by Festival Napa Valley. Enjoy an exclusive Meet and Greet following the rehearsal. On July 23, attend the concert and join Joshua and Larisa at their table for a post-concert dinner at Frank Family Vineyards. The following day, attend the Season Finale event of Festival Napa Valley at Alpha Omega. The annual whole hog barbeque brunch is replete with Alpha Omega’s phenomenal wines. Package includes three (3) nights (Farmhouse Garden View King with Balcony) at Alila Napa Valley (July 22, 23 and 24), two (2) Handwritten Bread and Butter Experiences, two (2) patron passes to Festival Napa Valley (July 23-24) which includes the priceless Voice and the Violin rehearsal and concert experience by Joshua Bell and Larisa Martínez followed by dinner at Frank Family Vineyards (July 23), and brunch at Alpha Omega (July 24).

Have you dreamed of being at the “house that Rockne built” – sitting in luxurious Club Seats on the 50-yard line next to the NBC booth in the Press box – and watching the Fighting Irish battle the Clemson Tigers in a thrilling Fall Home Game? Your dream can come true with this VIP Notre Dame package on November 4th and 5th. The VIP package for two includes 7th floor premium outside cushioned seats with overhead cover &amp; heat lamps; private furnished patios with amazing views of the stadium, tailgaters, &amp; the campus; premium food (full buffet) with beer, wine &amp; non-alcoholic beverages all included; and big TV screens scattered throughout the area to capture all the in-game action. Friday, the Loughreys will take you on an amazing tour of the team locker room including the tradition of touching the “Play Like a Champion” sign before walking onto the hallowed turf. Have your photo taken to commemorate the experience. Saturday you will have the opportunity to attend a Q/A session with AD Jack Swarbrick “ASK Jack &amp; Coach’s Keys”, 15 minute look at the day’s game (slides &amp; videos), special guest speaker, &amp; questions. And what’s a Home Game without Tailgating? Join Joe and Deborah for a fun tailgate as part of your November 5th pre-game excitement. This two-day package includes accommodations for two at the Marriott South Bend Mishawaka (four miles from the stadium) with (1) game day reserved stadium parking pass directly outside Gate C, and time to walk around campus Friday or Saturday before the game to visit the magic that is Notre Dame.

Enjoy a fall or winter three-day getaway to Michigan’s beautiful west coast. This 6-bedroom, 2 1/2 bath home sits just steps away from Lake Michigan in Macatawa Hills, located near amazing shopping, dining, and fun things to do in Holland, Saugatuck and Douglas. Dates available in October, 2022 through March, 2023 (excluding holidays). Note: The home is built into a dune and has 50 internal steps that lead to the main living space (living room and kitchen on the top floor). No Pets. Retail Value: $3,000 Donors: Brian Williams and Susan Brock Williams

IVCI Laureates Laureates are listed in order of placement

Richard Lin,,Gold Medalist Taiwanese-American violinist Richard Lin is the Gold Medalist of the 10th Quadrennial International Violin Competition of Indianapolis, which took place in September of 2018. Highlights of Mr. Lin’s 2021-2022 performances include concerts throughout Taiwan with the National Symphony Orchestra, the National Taiwan Symphony Orchestra and the Evergreen Symphony Orchestra. In the United States, he appeared with the Baton Rouge Symphony and the Indianapolis Chamber Orchestra. Multiple recitals in Taiwan, Texas, California, and Pennsylvania culminate on June 24 in his Carnegie Hall Stern Auditorium recital debut. Passionate about chamber music, Richard has been giving concerts throughout the United States as a member of Chamber Music Society of Lincoln Center’s Bowers Program and will perform at Music@Menlo this summer. Richard has collaborated with numerous orchestras and performed at celebrated concert venues throughout the world including the Tokyo Symphony Orchestra under conductor Norichika Iimori at Tokyo’s Suntory Hall. Other orchestras with whom he has worked are the NDR Radiophilharmonie; Indianapolis, North Carolina, Shanghai and Singapore symphonies; Poznań, Łódź, Polish Baltic, Nagoya, Taiwan, and Oklahoma City philharmonics; Hong Kong Sinfonietta, National Taiwan Symphony Orchestra, Yomiuri Nippon Symphony Orchestra, Orchestra Ensemble Kanazawa, Munich Chamber Orchestra, Amadeus Polish Chamber Orchestra, and the Royal Chamber Orchestra of Wallonia among others. Richard has amassed a startling collection of top prizes at major international competitions including First Prize at the Sendai International Violin Competition; Third Prize in the Joseph Joachim International Violin Competition in Hannover; and Second Prize at the Singapore and Michael Hill International Violin competitions. A dedicated teacher, Richard is on the faculty of the National Taipei University of Education. Born in Phoenix, Arizona and raised in Taiwan, Richard gave his public debut at age eleven performing the Saint-Saëns Violin Concerto No. 3 with the Taipei Symphony Orchestra. Richard graduated from the Curtis Institute of Music and The Juilliard School where he studied with Aaron Rosand and Lewis Kaplan respectively. As part of his Indianapolis prize, Richard has the four-year use of the 1683 “ex-Gingold” Stradivarius and the 2017 Sam Zygmuntowicz. Viva il Violino 2022

Thank you for joining us tonight for Viva il Violino - our once a year opportunity to raise the critical funds needed for the Quadrennial Competition and its annual programming. The Indianapolis remains the premier violin competition in the United States and one of the most important in the world for launching successful careers. It continues to put Indiana on the world’s music stage. Join us by proudly supporting world-class excellence for which the International Violin Competition of Indianapolis is known.

Be prepared to bid during tonight’s Fund-A-Need. Thank you to the Cynthia Parker Matthews Family Foundation for their $11,000 Fund-a-Need Challenge Grant! Accept the challenge and bid!