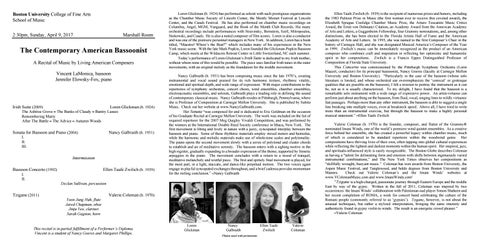 Loren Glickman (b. 1924) has performed as soloist with such prestigious organizations as the Chamber Music Society of Lincoln Center, the Mostly Mozart Festival at Lincoln Center, and the Casals Festival. He has also performed on chamber music recordings on Columbia, Angel, MGM, Vanguard, and the Book of the Month Club Records. His many orchestral recordings include performances with Stravinsky, Bernstein, Szell, Mitropoulos, Stokowski, and Casals. He is also a noted composer of film scores. Loren is also a conductor and was one of the premiere personnel managers in New York. In addition, Loren has a book titled, “Maestro! Where’s the Beat?” which includes many of his experiences in the New York music scene. With the late Mark Popkin, Loren founded the Glickman-Popkin Bassoon Camp, which meets at the Wildacres Retreat Center in Little Switzerland, NC each summer. Today’s performance of Loren Glickman’s Irish Suite is dedicated to my Irish mother, without whom none of this would be possible. The piece uses familiar Irish tunes in the outer movements, with an original melody as the foundation for the middle movement. Nancy Galbraith (b. 1951) has been composing music since the late 1970’s, creating instrumental and vocal sound praised for its rich harmonic texture, rhythmic vitality, emotional and spiritual depth, and wide range of expression. With major contributions to the repertoires of symphony orchestras, concert choirs, wind ensembles, chamber ensembles, electroacoustic ensembles, and soloists, Galbraith plays a leading role in defining the sound of contemporary classical music. Nancy Galbraith resides in Pittsburgh, Pennsylvania, where she is Professor of Composition at Carnegie Mellon University. She is published by Subito Music. Check out her website at www.NancyGalbraith.com. Her Sonata “was composed for and is dedicated to Eric Goldman on the occasion of his Graduate Recital at Carnegie Mellon University. The work was included on the list of required repertoire for the 2007 Meg Quigley Vivaldi Competition, and was performed by the winners at the International Double Reed Society conference in Ithaca, New York. The first movement is lilting and lively in nature with a jazzy, syncopated interplay between the bassoon and piano. Some of these rhythmic materials employ mixed meters and hemiolas, while the harmonic and melodic materials make use of whole-tone scales and polytonality. The piano opens the second movement slowly with a series of polytonal and cluster chords to establish and air of meditative serenity. The bassoon enters with a sighing motive in the high register, gradually expanding to a broader expression of the theme, supported by frenetic arpeggios in the piano. The movement concludes with a return to a mood of tranquil, meditative melancholy and wistful piece. The first and spritely final movement is played, for the most part, in a light, staccato, and dance-like perpetual motion. The two voices again engage in playful syncopated exchanges throughout, and a brief cadenza provides momentum for the reeling conclusion.” –Nancy Galbraith

This recital is in partial fulfillment of a Performer’s Diploma. Vincent is a student of Nancy Goeres and Margaret Phillips.

Ellen Taafe Zwilich (b. 1939) is the recipient of numerous prizes and honors, including the 1983 Pulitzer Prize in Music (the first woman ever to receive this coveted award), the Elizabeth Sprague Coolidge Chamber Music Prize, the Arturo Toscanini Music Critics Award, the Ernst von Dohnanyi Citation, an Academy Award from the American Academy of Arts and Letters, a Guggenheim Fellowship, four Grammy nominations, and, among other distinctions, she has been elected to the Florida Artists Hall of Fame and the American Academy of Arts and Letters. In 1995, she was named to the first Composer’s Chair in the history of Carnegie Hall, and she was designated Musical America’s Composer of the Year in 1999. Zwilich’s music can be immediately recognized as the product of an American composer who combines craft and inspiration in reflecting her optimistic and humanistic spirit in her compositions. Zwilich is a Francis Eppes Distinguished Professor of Composition at Florida State University. This Concerto was commissioned by the Pittsburgh Symphony Orchestra (Lorin Maazel, conductor) for its principal bassoonist, Nancy Goeres (faculty at Carnegie Mellon University and Boston University). “Particularly in the case of the bassoon (whose solo literature is limited, and whose orchestral use overemphasizes the ‘comical’ or grotesque qualities that are possible on the bassoon), I felt a mission to portray the instrument as it can be, not as it is usually characterized. To my delight, I have found that the bassoon is a remarkable solo instrument with a wide range of expressive power. An artist-virtuoso can perform just about anything on the bassoon, from fluid, vocal, singing lines to wildly virtuosic fast passages. Perhaps more than any other instrument, the bassoon is able to suggest a single line breaking into multiple voices, even at breakneck speed. Above all, I have tried to write more than an instrumental exercise, but through the bassoon to make a highly personal musical statement.” –Ellen Taafe Zwilich Valerie Coleman (b. 1970) is the founder, composer, and flutist of the Grammy® nominated Imani Winds, one of the world’s premiere wind quintet ensembles. As a creative force behind her ensemble, she has created a powerful legacy within chamber music, much of which is considered to be standard repertoire within the woodwind genre. Her compositions have thriving lives of their own, often tapping into global cultural experiences while reflecting the lightest and darkest moments within the human spirit. Her inspired, jazz, and spirituals-influenced style is easily recognizable. The Boston Globe describes Coleman as having a “talent for delineating form and emotion with shifts between ingenuously varied instrumental combinations,” and The New York Times observes her compositions as “skillfully wrought, buoyant music.” Coleman has won awards from Boston University, the Aspen Music Festival, and Tanglewood, and holds degrees from Boston University and Mannes. Check out Valerie Coleman’s and the Imani Winds’ websites at www.VColemanMusic.com and www.ImaniWinds.com! “Tzigane is a high-charged, passionate journey through Eastern Europe and the middle East by way of the gypsy. Written in the fall of 2011, Coleman was inspired by two occurrences: the Imani Winds’ collaboration with Palestinian oud player Simon Shaheen and her recent completion of ROMA, a work for concert band celebrating the culture of the Romani people (commonly referred to as ‘gypsies’). Tzigane, however, is not about the unusual techniques, but rather a stylized interpretation, bringing the same intensity and authenticity found in gypsy violin to winds. The result is an energetic crowd pleaser.” –Valerie Coleman 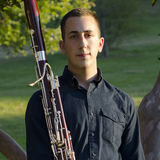