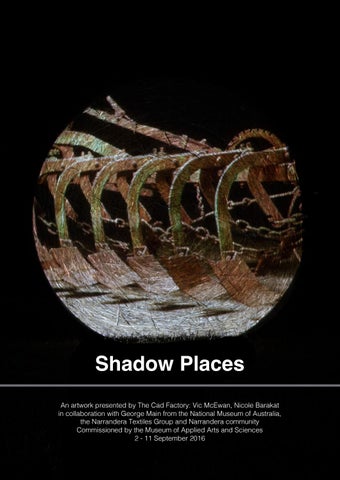 Shadow Places An artwork presented by The Cad Factory: Vic McEwan, Nicole Barakat in collaboration with George Main from the National Museum of Australia, the Narrandera Textiles Group and Narrandera community Commissioned by the Museum of Applied Arts and Sciences 2 - 11 September 2016

The Artwork The artwork Shadow Places is a creative collaboration between the artists Vic McEwan, Nicole Barakat, George Main, the Narrandera Textiles Group and the Narrandera community, commissioned by the Museum of Applied Arts and Sciences. Shadow Places consists of six round hay bales, with video projections and sound exploring the themes of Sydney Design, along with three large scale textile panels linking the hay bales to the video content. The artwork was installed in the Turbine Hall at the Powerhouse Museum for Sydney Design 2016 from 2 -11 September. Shadow Places combines ecological and agricultural thinking, projection, sound and focuses on the interconnectedness of rural and urban places and people. It proposes that rural landscapes are forgotten places, despite people being intimately tied to them through food and fibre production, through ecology and materiality. The title ‘Shadow Places’ comes from the writings of eminent Australian philosopher Val Plumwood who used this term to describe productive places hidden from the people they sustain, places that people don’t know but are so reliant on through the consumption of food and fibre. We tend to value the outputs, not the places. We see them as spaces to extract from, not places to visit or connect to.

Due to the very nature of industrial systems of food and fibre production, processing and distribution, we cannot easily identify or care for these places, which is arguably one of the reasons why many of these regional locations are faltering, ecologically and socially. This artwork looks at the implications and consequences that design have had on our agricultural past and futures in terms of food and fibre security and climate change and its impact on both people and place. Read more about the process of making Shadow Places Watch the video content

Think what it would mean to acknowledge and honour all the places that support you.

The Theme for Sydney Design Make or Break

It is an exciting time in the design world with technology making more possible than ever before. For many designers these increased opportunities provoke a revision of the past. Inspired by previous approaches, products and techniques - designers rework these and create new work for the future. The ability of design to solve problems is never more valuable as we face a new world order of manufacturing, economic and environmental challenges. The theme for Sydney Design 2016 â&amp;#x20AC;&amp;#x2DC;Make or Breakâ&amp;#x20AC;&amp;#x2122; explores designersâ&amp;#x20AC;&amp;#x2122; response to this and carries on with the tradition of the festival presenting the industry to the public. Read more about Sydney Design 2016

The artwork Shadow Places is a creative collaboration between the artists Vic McEwan, Nicole Barakat, George Main, the Narrandera Textiles Group and the Narrandera community, commissioned by the Museum of Applied Arts and Sciences. 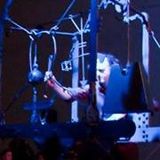