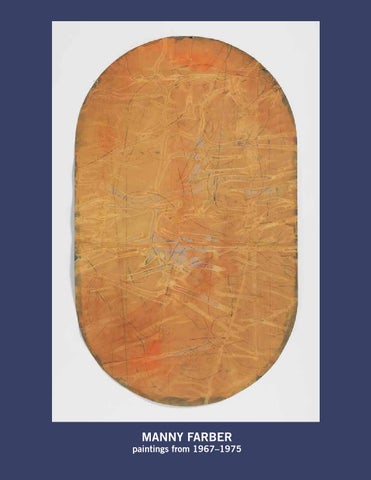 Van Doren Waxter is pleased to present Manny Farber: paintings from 1967 – 1975, a solo exhibition featuring early, often double-sided, abstract works on paper by the late Manny Farber (1917 – 2008). The exhibition will be on view from January 4 – 18, 2014. These large-scale, process-driven paintings were constructed with Kraft paper that Farber meticulously layered to create a strong foundation for paint. Three-foot squares of paper were joined with one-inch seams and then cut into decisive shapes: lozenges, trapezoids, ovoids, etc. which he laid out on top of plastic sheeting. First he poured acrylic paint over the surface, dispersed it using rollers, then flipped it over onto the plastic to dry - where after a preparatory soaking with water he would repeat this process on the other side using a deliberately different, yet complimentary color, this time adding a sheet of muslin that the paint would be poured over and which was later removed. The seams guided the water and paint, dictated how the two colors merged and interacted with each other. This method resulted in works where the surface and image became one. In addition to this consuming, permeable painting process, Farber utilized linear underdrawings on the raw paper made with snapped chalk lines and by dragging a paint-soaked piece of string over the painting’s surface to create pockets of movement that added a certain depth to the image’s surface. The resulting lyrical façade looks atmospheric, planetary, aqueous and geologic, with layers of color and the natural creasing of the paper. Crackled paint, veins, scars are all part of what makes up the “skin” of these paintings. Farber distinguished himself from the color field school in his rejection of formalist, high-contrast, artificial colors. Instead, his sensibility leans toward color that looks like “it’s been through a lot: abraded, drowned, rising to the surface, floating. Light-sensitive color that has been subjected to natural phenomena.” The visual experience of these works invokes a cinematic quality by virtue of their precise, monumental planes of color and how the viewer scans over the image. The shaped paper works engage in a real dialogue with architectural space, presented by being pinned directly to the wall. Farber’s experience as a carpenter and sculptor is evident in the physical construction of these works, both in the making process and as objets d’art. Manny Farber was born in Douglas, AZ in 1917 and died in Leucadia, CA in 2008. He studied at the University of California, Berkeley; California School of Fine Arts, San Francisco; and the Rudolf Schaefer School of Design, San Francisco. In addition to making art, Farber also worked as a film and art critic for four decades. He received the National Endowment for the Humanities, Fellowship for Independent Study in 1977-78 and the Guggenheim Fellowship in 1978-79. His work is included in the collections of the Museum of Contemporary Art, Los Angeles, the Solomon R. Guggenheim Museum, New York, the Whitney Museum of American Art, New York, the Museum of Contemporary Art, San Diego, and the Museum of Fine Arts, Boston among others.

No one could doubt that Manny Farber has always seen films through a painter’s eyes. Lately the inverse is true as well, as he has come to paint with a film-maker’s vision. Looking from the exhibition to Farber’s writing it becomes clear that the basis for the film analysis and the painting’s impulses are concentric: an insistence on inventing space as the salient visual activity. Richard Armstrong, Manny Farber: An Exhibition Organized by the La Jolla Museum of Contemporary Art, 1978

As they abolish the separation between display surface and support structure with the elimination of the stretcher, these paintings also dissolve the traditional distinction between surface and figuration imposed upon it. The fusion of paper and poured acrylic applied to both sides to the point of total saturation generates a new kind of pictoriality in which the surface and image are one. Sheldon Nodelman, Manny Farber: About Face, 2004

[The paintings] weren’t done the way people draw, with their arm. You gauge a linear work with the length of the arm making the move. The spatiality of those huge paintings came about partly because the rude and crude loft we had was huge. It’s also related to the fact that when you’re doing a bridge or building in carpentry, it’s not an arm length that’s the measure, it’s the whole span—the roof length or floor length. You can’t cut that kind of a line with your arm. You’re cutting it with expansiveness. The spatiality comes from being in dangerous positions on bridges or skyscrapers. Manny Farber, Art in America, October 2004

Farber’s paintings, however, are often of monumental scale—easily the equals of the very large works of his prominent contemporaries in more conventional materials and format—and of an imposing presence… and their figuration firmly appropriates the entire field of the support from edge to edge. Sheldon Nodelman, Manny Farber: About Face , 2004

Making the contour is not a single gestural act but a sequence of delicate, intuitive decisions. It can take a day or two of adjusting the big surface against the thin slivers of paper that modify a curve or angle before Farber is satisfied with its format. Amy Goldin, Manny Farber: An Exhibition Organized by the La Jolla Museum of Contemporary Art, 1978

Farber likes color that looks as if itâ&amp;#x20AC;&amp;#x2122;s been through a lot: abraded, drowned, rising to the surface, floating. Light-sensitive color that has been subjected to natural phenomena. He hates cosmetic color, color as artifice or coating, color that announces itself as pigment. Amy Goldin, Manny Farber: An Exhibition Organized by the La Jolla Museum of Contemporary Art, 1978

The most inclusive description of the art is that, termite-like, it feels its way through walls of particularization, with no sign that the artist has any object in mind other than eating away the immediate boundaries of his art, and turning these boundaries into conditions of the next achievement. Manny Farber, â&amp;#x20AC;&amp;#x153;White Elephant Art vs. Termite Artâ&amp;#x20AC;?, 1962

His basic task was to deny the one-sidedness of the paper, which meant treating it as permeable stuff rather than as a surface. The first step, therefore, was to saturate the paper and paint the back of it. The colorâ&amp;#x20AC;&amp;#x2122;s bleed-through makes its entire mass, its back, interior and front, visible at once. Accordingly, the color Farber used on the back usually contrasts strongly with the color on the face â&amp;#x20AC;&amp;#x201D; a creamy greenish surface will have a heavy-looking ox-blood on the back, for example. Amy Goldin, Manny Farber: An Exhibition Organized by the La Jolla Museum of Contemporary Art, 1978

Begins career as art critic, then film critic for The New Republic. In the following four decades he writes for The Nation, Time, Commentary, The New Leader, Cavalier, Film Comment, and Artforum.

Passes away at his home in Leucadia, CA

National Endowment for the Humanities, Fellowship for Independent Study

National Endowment for the Arts Grant

Narrative Art Of The Seventies, American Foundation of the Arts, Miami, FL

CRITICAL REVIEWS ON ART BY FARBER 1961

Van Doren Waxter All rights reserved. No Part of the contents of this catalogue may be reproduced without permission of the publisher. 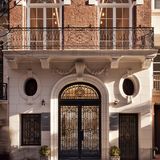