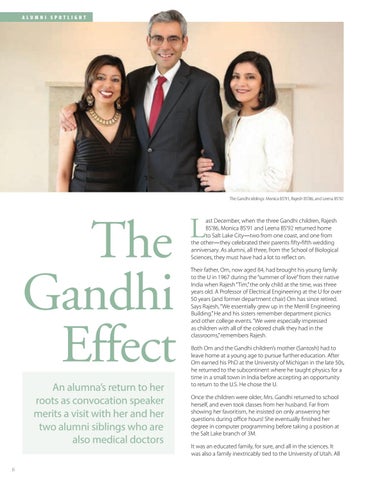 ast December, when the three Gandhi children, Rajesh BS’86, Monica BS’91 and Leena BS’92 returned home to Salt Lake City—two from one coast, and one from the other—they celebrated their parents fifty-fifth wedding anniversary. As alumni, all three, from the School of Biological Sciences, they must have had a lot to reflect on.

Their father, Om, now aged 84, had brought his young family to the U in 1967 during the “summer of love” from their native India when Rajesh “Tim,” the only child at the time, was three years old. A Professor of Electrical Engineering at the U for over 50 years (and former department chair) Om has since retired. Says Rajesh, “We essentially grew up in the Merrill Engineering Building.” He and his sisters remember department picnics and other college events. “We were especially impressed as children with all of the colored chalk they had in the classrooms,” remembers Rajesh. Both Om and the Gandhi children’s mother (Santosh) had to leave home at a young age to pursue further education. After Om earned his PhD at the University of Michigan in the late 50s, he returned to the subcontinent where he taught physics for a time in a small town in India before accepting an opportunity to return to the U.S. He chose the U. Once the children were older, Mrs. Gandhi returned to school herself, and even took classes from her husband. Far from showing her favoritism, he insisted on only answering her questions during office hours! She eventually finished her degree in computer programming before taking a position at the Salt Lake branch of 3M. It was an educated family, for sure, and all in the sciences. It was also a family inextricably tied to the University of Utah. All