by University of Utah - College of Science

Uncovering genomic conflicts to solve the ‘mystery of mysteries’

The first thing one notices on a tour of the Nitin Phadnis lab in the South Biology Building is the distinctive scent of cornmeal and molasses: room and board in thousands of plastic, numbered vials for the millions of fruit flies (Drosophila pseudoobscura) which are the subject of his research.

Back in his office it’s more of a visual that you notice: a floor-toceiling white board with curious hieroglyphics at the bottom that look distinctively like that of child’s. These are not the markings of flies but of other small individuals. Phadnis is a father of a daughter and the white board has clearly been a tempting tabula rasa while visiting dad away from home … temptation with limited reach, at any rate.

Above these intriguing chicken scratches from tiny hands, there are formulas and graphs detailing the work of this geneticist who is asking, “how do new species evolve, anyway?”

It’s a question that has driven his research since his arrival at the School of Biological Sciences in 2014 and is underscored by the energizing fact that the principles of biology, unlike mathematics and physics, are relatively young. “It’s been relatively recent that we even learned the structure of DNA,” Phadnis reminds you. “We didn’t have CRISPR gene-editing technologies or some of the advanced sequencing technologies even five years ago. There are a lot of unknowns still.” Unknowns are what inspire this thirty-eight-year-old native of India who initially wanted to be an astrophysicist but found the questions in evolutionary genetics more interesting, and personally motivating. His lab attempts to answer questions about how new species arise and how silent but powerful evolutionary conflicts inside genomes drive cryptic changes.

Speciation, the process by which one species splits into two, involves the evolution of reproductive isolating barriers such as the sterility or inviability (when an individual is unable to survive or develop normally) of hybrids between previously interbreeding populations. Cracking the code of how new species split from existing species hinges on understanding how and why such hybrids break down.

Phadnis is quick to recall Darwin’s On The Origin of Species, in which the father of evolutionary science could find no satisfactory solution to the apparent paradox of why natural selection would tolerate the onset of these genetic barriers. Think of the mule: a cross between a horse and a donkey, but never able to sexually reproduce. The question of why mules and other hybrids are unfit has been pondered over since the days of Aristotle. Darwin called this problem the “mystery of mysteries.”

But “[d]espite decades of intense efforts,” writes Phadnis, “very few such genes have been identified. We know even less about the evolutionary forces and the molecular developmental pathways that are disrupted in hybrids.”

Since Darwin there have been different angles of attack to de-claw the mother of all evolutionary mysteries. There have been new lines of inquiry, new research questions. Relatively speaking, these questions are old, but they are now being approached by new technology through collaboration with human genetics, surgery, human data sets and other disciplines and information. “This style of science,” says Phadnis, “couldn’t be addressed in other institutions as easily as it is at the U of U” where a major health sciences campus is so close (and so collaborative) to biologists, engineers and others.

This proximity of resources is especially helpful attacking problems in what’s known as genomic conflict. Such conflicts within genomes can lead to the evolution of hybrid incompatibilities, which reduce the exchange of genetic variants between species. Such reproductive barriers that stop the exchange of genes between populations are key to speciation. A critical question that Phadnis is asking as he and his team look at fruit flies which, conveniently, reproduce every eleven days, creating a new generation, is why such hybrid incompatibility genes evolve so rapidly.

It likely has something to do with competing, out-of-sync factions warring under the scope. “They are like arms races inside of genomes,” he says. These are dancers in which one partner suddenly speeds up the tempo, leaving the other at least temporarily lagging behind. This leads “to the rapid evolution of essential machinery” on the molecular level. For example, “when these silent but fierce wars occur inside genomes, the arms races are played out with: You build this? Then I’ll build that!”

There are waves of these fierce genomic battles, and the cellular machinery involved in these fights can often evolve very rapidly. Figuring out how that machinery works involves first locating the “cheating chromosomes” and performing long-read sequencing to find the break points (what’s known as chromosomal inversion). Using CRISPR, the research scientist re-engineers those points and “flips” them back to the original positioning or sequence.

Returning to the combat metaphor, what the researcher is doing is identifying where the cheating is happening by spying on or “apprenticing” with a master chromosome cheater. These master cheaters are deeply familiar with the rules, enough to know how to break those rules and gain the advantage (win) in forming hybrid organisms. The researcher, by adding what Phadnis refers to as “deep evolutionary thinking” to the process, can then learn of previously unknown but profoundly impactful molecular techniques. “messed up,” and the “mess ups” have implications for human infertility. How is it that in some human gene pools the future of an entire sex can be wiped out as “cheaters” eliminate the 50/50 pairings of XX and XY chromosomes designed by nature to roughly equal numbers of males and females to promote the survival and evolution of a species?

Other questions quickly follow: Do these cheating chromosomes exist in humans and can we design ways to find them? What are the other cheating mechanisms these rogue chromosomes use? Will these expected forthcoming conclusions add to the literature of how infertility occurs in humans and how it can be prevented?

Does it lend to predictions about the sex of outcomes/births?

These questions will inform Phadnis’ next steps, exploiting rich collaborations with other University of Utah research and academic units virtually a stone’s throw from the School of Biological Sciences. Up the hill in Human Genetics, for example, there is much to learn about sperm cells that are not “fertilization-competent.” Clearly, these little swimmers are not all created equal. Can we build a kind of race track or Olympicstyle swimming pool to better observe and learn from these inter-male sperm competitions? Can those competitions (or sperm pools) be sequenced with CRISPR or some other related technology? Are we about to provide a “hook” for an entirely new line of scientific inquiry?

“When these silent but fierce wars occur inside genomes, the arms races are played out with: You build this? Then I’ll build that!”

“There are lots of amazing things going on these days in biology,” concludes Phadnis, referring to these questions and many more. The persistent odor of corn meal and molasses, the ubiquitous piping everywhere through which flows carbon dioxide to put fruit flies to sleep before observing them–it’s certainly worth all of this. Nitin Phadnis nods with a smile at the empaneled sketches by the tiny hands of his daughter.

“Here at the U you can actually come up with original ideas to solve long-standing problems by bringing teams of people together with different expertise. And biology,” he reminds us, “is the hub of all that. It unites all of life sciences. We’re the collection of misfits and trouble-makers,” he muses.

Is that a bird there? A roughly hewn model of a mitochondria over there? Perhaps flailing stick figures of mom and dad? 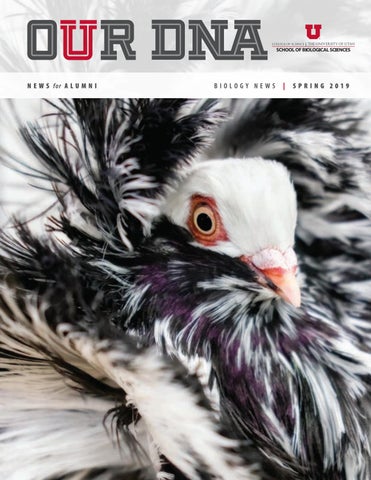 by University of Utah - College of Science