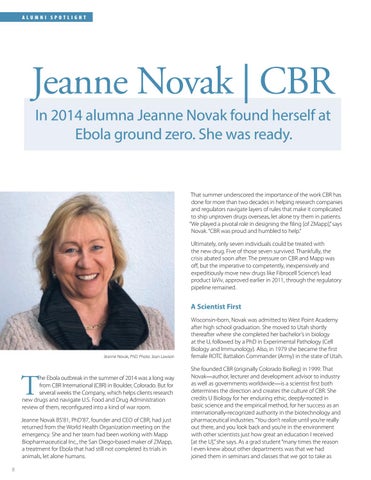 Jeanne Novak | CBR In 2014 alumna Jeanne Novak found herself at Ebola ground zero. She was ready.

That summer underscored the importance of the work CBR has done for more than two decades in helping research companies and regulators navigate layers of rules that make it complicated to ship unproven drugs overseas, let alone try them in patients. “We played a pivotal role in designing the filing [of ZMapp],” says Novak. “CBR was proud and humbled to help.” Ultimately, only seven individuals could be treated with the new drug. Five of those seven survived. Thankfully, the crisis abated soon after. The pressure on CBR and Mapp was off, but the imperative to competently, inexpensively and expeditiously move new drugs like Fibrocell Science’s lead product laViv, approved earlier in 2011, through the regulatory pipeline remained.

he Ebola outbreak in the summer of 2014 was a long way from CBR International (CBR) in Boulder, Colorado. But for several weeks the Company, which helps clients research new drugs and navigate U.S. Food and Drug Administration review of them, reconfigured into a kind of war room.

Jeanne Novak BS’81, PhD’87, founder and CEO of CBR, had just returned from the World Health Organization meeting on the emergency. She and her team had been working with Mapp Biopharmaceutical Inc., the San Diego-based maker of ZMapp, a treatment for Ebola that had still not completed its trials in animals, let alone humans. 8

Wisconsin-born, Novak was admitted to West Point Academy after high school graduation. She moved to Utah shortly thereafter where she completed her bachelor’s in biology at the U, followed by a PhD in Experimental Pathology (Cell Biology and Immunology). Also, in 1979 she became the first female ROTC Battalion Commander (Army) in the state of Utah. She founded CBR (originally Colorado BioReg) in 1999. That Novak—author, lecturer and development advisor to industry as well as governments worldwide—is a scientist first both determines the direction and creates the culture of CBR. She credits U Biology for her enduring ethic, deeply-rooted in basic science and the empirical method, for her success as an internationally-recognized authority in the biotechnology and pharmaceutical industries. “You don’t realize until you’re really out there, and you look back and you’re in the environment with other scientists just how great an education I received [at the U],” she says. As a grad student “many times the reason I even knew about other departments was that we had joined them in seminars and classes that we got to take as