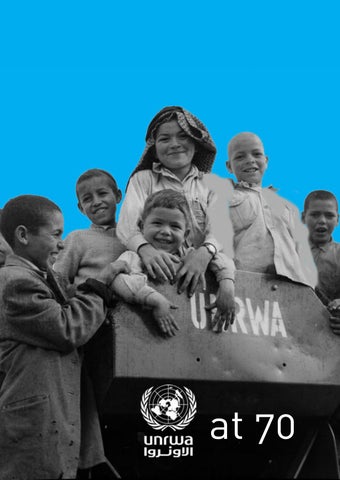 introduction On 8 December 2019, the United Nations Relief and Works Agency for Palestine Refugees in the Near East (UNRWA) will be seventy years old. Following the Arab-Israeli conflict of 1948, UNRWA was established by the United Nations General Assembly to carry out direct relief and works programmes for Palestine refugees. Today, some 5.5 million Palestine refugees in the Agency’s five fields of operations – Jordan, Lebanon, Syria, the Gaza Strip and the West Bank, including East Jerusalem – are eligible for the Agency’s services. Over the past seven decades, Palestine refugees have experienced extremes in violence, suffering and injustice. As a result, they are presently confronted with daunting human development and protection challenges, which stand to arrest their significant potential. Humanitarian conditions across much of the UNRWA areas of operation are grave, exacerbated by protracted conflict and the lack of political progress. While the 70th Anniversary of UNRWA provides an occasion for sober reflection on Palestinian exile, it also affords a moment to consider the contribution that the Agency’s programmes have made to the lives of generations of Palestine refugees.

Through primary education and health care, social safety-net interventions, the building and maintenance of homes and infrastructure, microfinance and protection services, and humanitarian assistance in times of emergency, UNRWA continues to be a positive force in the lives of Palestinians. On this solemn occasion, UNRWA is proud to share a photographic review of the displacement, dispossession and hope of Palestine refugees, drawn from the magnificent and extensive historic UNRWA Film and Photo Archive (inscribed by UNESCO in the Memory of the World Register in 2009) and showcasing UNRWA service delivery and the daily lives and historic moments of Palestine refugees throughout the decades. It includes iconic images of their catastrophic displacement in 1948, the establishment of camps in the 1950s, the second flight during the 1967 war, the war in Lebanon, and the unrest from the second half of the 1980s to the early twenty-first century. But the unfolding narrative also shows the extraordinary accomplishments by UNRWA and by Palestinians for Palestinians; past milestones of achievement and success, towards a horizon of validation and hope, however distant that may seem today.

a timeline of displacement, disp

unrwa pioneers the use of najjar salts to combat dehydration

unrwa begins operations in 1950. 69% of budget allocated to immediate relief

a and a acre lebanon camp wars 18,000 palestine refugees displaced

declaration of the state of palestine in algiers

unrwa introduces emergency measures for lebanon and the opt (emlot)

israel launches a large-scale military operation in gaza in december, 2008

General view of the Assembly chamber during the 128th meeting of the Second Session of the United Nations General Assembly, at which the partition of Palestine into Jewish and Arab states was approved by 33 votes to 13, with 10 abstentions and one absent.

Palestine refugee girls push their belongings in prams and carts as they flee Jaffa in the wake of the first Arab-Israeli war in 1948. ÂŠ 1948 UN Archives Photographer Unknown

A Palestine refugee woman cut off from her home by the 1949 Armistice Line (Green Line), which was established after the first Arab-Israeli war in 1948. ÂŠ Undated UN Archives Photographer Unknown

A man and his daughter collect rations at a distribution point in Aqaba, Jordan. In the 1950s, UNRWA lorries distributed rations every two months to the refugees living in and around Aqaba as there are no refugee camps in Aqaba. ÂŠ Undated UNRWA Archive Photographer Unknown

An instructor inspects the work of a trainee in the Radio and TV Mechanics course in Kalandiaâ&#x20AC;&#x2122;s Vocational Training Centre, provided and operated by UNRWA. ÂŠ Undated UNRWA Archive Photographer Unknown

When this picture was taken at Khan Younis in 1955, the tented refugee camp in the Gaza Strip had just been replaced by cement block houses. These youngsters were happy to have more weatherproof shelter against the summer sun and winter rains. ÂŠ 1955 UNRWA Archive Photo by J. Madvo

Once every three months, UNRWA lorry convoys go on a trek and maintain contact with Palestine refugees living in the inaccessible mountainous regions of South Jordan. They distribute rations and then continue on their arduous path. ÂŠ Undated UNRWA Archive Photographer Unknown

An UNRWA nurse holds a packet of oral rehydration salts used to treat children suffering from excess weight loss caused by malnutrition or diarrhea. This simple but effective treatment has saved the lives of thousand of Palestine refugee children. ÂŠ 1982 UNRWA Archive Photo by George Nehmeh

Aerial view of Dheisheh camp, established in 1949 and located along the main street in Bethlehem, it lies on an open hillside to the south, within sight of the Church of Nativity. ÂŠ 1959 UNRWA Archive Photographer Unknown

After the ninth year of living in tents, since their exodus in 1948, the 1050 refugees of Aida camp were summoned to the distribution centre, where they usually go to collect their monthly rations, instead, they were given the keys to their new concrete block shelter. ÂŠ 1959 UNRWA Archive Photographer Unknown

Thanks to a contribution from Near East Emergency Donations (need), 250 tworoom prefabricated units will soon replace these tents in which 15,000 Palestine refugees have been living in Marka refugee camp, Jordan. ÂŠ 1968 UNRWA Archive Photographer Unknown

Overview of Baqaâ&#x20AC;&#x2122;a emergency camp, 5000 shelters in this camp have been constructed with funds provided by the government of the Federal Republic of Germany. ÂŠ 1969 UNRWA Archive Photo by George Nehmeh

To ensure that Palestine refugee children up to 6 years of age have a nutritionally-balanced diet, UNRWA provides a mid-day meal, six days a week, at its 94 feeding centers. These children are devouring their lunch at an UNRWA supplementary feeding centre in Jalazone camp, West Bank. ÂŠ 1972 UNRWA Archive Photo by Kay Brennan

A nurse plays with a baby that is being treated at the UNRWA health centre in Jerusalem, West Bank. ÂŠ 1973 UNRWA Archive Photographer Unknown

Following the 52-day siege of Tel Zaâ&#x20AC;&#x2122;atar, during the summer of 1976, this Palestine refugee camp in Beirut, Lebanon, was completely razed to the ground. ÂŠ 1979 UNRWA Archive Photographer Unknown

A destroyed UNRWA/UNESCO preparatory school in Burj Hammoud, a suburb of Beirut Lebanon. This school had an enrollment of 700 pupils prior to the outbreak of civil war. ÂŠ 1977 UNRWA Archive Photo by Myrtle Winter Chaumeny

Medical staff carry a dead body in Shatila camp, Beirut, Lebanon, on 20 September 1982. Several hundred Palestine refugees and other civilians were massacred in the Sabra and Shatila districts of south Beirut between 16 and 18 September. ÂŠ 1982 UNRWA Archive Photographer Unknown

The Israeli invasion of Lebanon in the summer of 1982 caused widespread destruction to Palestine refugee camps and resulted in thousands of homeless Palestine refugees. UNRWA introduced a self-help shelter repair programme which offers building materials or cash grants for refugees to repair their own shelters. ÂŠ 1982 UNRWA Archive Photo by George Nehmeh

This Palestine refugee woman fled Burj Barajneh camp with her son when the fighting broke out in 1986; she returns to the news that a close relative has been killed. ÂŠ 1986 UNRWA Archive Photo by H. Haider

UNRWA and other organizations have joined the refugee communities in Jordan to help he mentally and physically disabled children among Palestine refugees by offering a basic education program in day centre. By early 1988, four day centre had been opened in refugee camps in Jordan such as this one in Souf camp. ÂŠ1988 UNRWA Photo By Munir Naser

Shatila camp was besieged by Israeli forces in 1982 and then by local militias between 1985 to 1988, resulting in the campâ&#x20AC;&#x2122;s destruction. When hostilities subsided in 1988, hundred of Shatila residents were killed or wounded and many others left the camp for safety, while those that stayed began rebuilding their homes. Local groups provided building materials and UNRWA gave cash grants for housing repairs. ÂŠ 1989 UNRWA Archive Photo by Munir Nasir

The number of Palestine refugee children enrolled UNRWA schools rose from 43,000 in 1950 to 360,000 in 1990 owing to the great desire of refugees for education and natural population growth. Today, education is the Agencyâ&#x20AC;&#x2122;s largest program taking more than half the UNRWA budget. ÂŠ 1990 UNRWA Archive Photo by Munir Nasir

Palestinians in their shelter in Bureij refugee camp, watch the historic singing of the Peace Accord in Cairo on May 4 1994. ÂŠ 1994 UNRWA Archive Photo by Munir Nasir

A Palestine refugee woman in one of the UNRWA solidarity group lending teams receives her check, a low-interest loan, enabling her to establish her project and provide for her family. ÂŠ 1994 UNRWA Archive Photo by Munir Nasir

A scene from the School of Nursing and Allied Health Services being constructed in Khan Younis in the Gaza Strip, with funds donated by the Saudi Fund for Development,1996. ÂŠ 1996 UNRWA Archive Photo by Munir Nasir

Women weep at the destruction of Khan Younis camp in Gaza during the second intifada. ÂŠ 2001 UNRWA Archive Photographer Unknown

A boy stands in front of the West Bank Barrier. ÂŠ 2006 UNRWA Photo by J.C. Tordai

At Beach Boys Elementary School A, Anas Abu Hamam, fourth grade, was diagnosed with a sight deficiency. He has just received his eyeglasses. ÂŠ 2008 UNRWA Photo by Shareef Sarhan

Amnesty International is investigating the Israeli Armyâ&#x20AC;&#x2122;s alleged use of White Phosphorous munitions in populated areas during its 22-day blitz on the Gaza Strip. ÂŠ 2009 UNRWA Photo by Mohammed Abed

Summer games on the beach in Gaza. Â© 2011 UNRWA Photo by Shareef Sarhan

Children on their way to school in Gaza. Â© 2012 UNRWA Photo by Shareef Sarhan

In January 2014, when UNRWA was able to complete its first humanitarian distribution in Yarmouk after almost six months of siege, it was met by thousands of desperate refugees on the destroyed main street. ÂŠ 2014 UNRWA Photographer Unknown

UNRWA Protection Social Workers (PSW) Salwa Jwalis and Safa Sawwaf visit Mohammed Ibrahim Mohammed Jahalin in the Bedouin community of Abu Falaf / Kurshan. His structures got demolished on October 9 2016 under the authority of the Jerusalem municipality because he did not have a permit to build. During these visits, the PSW’s check up on the family’s needs and welfare and offer different forms of assistance. © 2016 UNRWA Photo by Dirk-Jan Visser

#myvoicemyschool is a student voice project which gives young people a say in their education and future. Palestine refugee teenagers from Syria living in Syria, Lebanon and Jordan, and their peers in three British schools will take part in a pilot project supporting them to explore how education can be improved to meet their aspirations. ÂŠ 2014 UNRWA Photo by Shareef Sarhan

UNRWA launches its Dignity Is Priceless Campaign to raise funds after an unprecedented cut to funding to the Agency by the United States. ÂŠ 2018 UNRWA Photo

Protesters in Gaza at the Great March of Return. ÂŠ 2018 UNRWA Photo 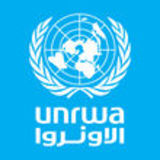