Perspectives on the past 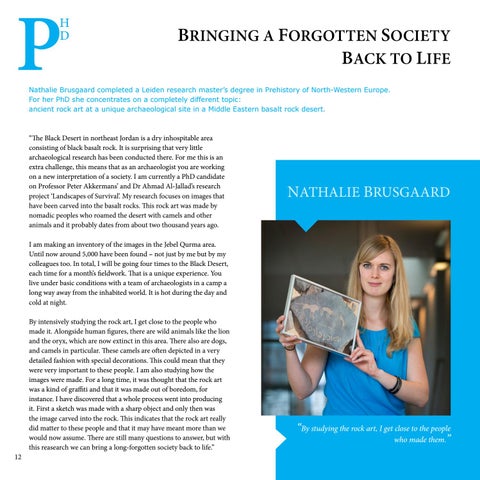 Bringing a forgotten society back to life

Nathalie Brusgaard completed a Leiden research master’s degree in Prehistory of North-Western Europe. For her PhD she concentrates on a completely different topic: ancient rock art at a unique archaeological site in a Middle Eastern basalt rock desert.

“The Black Desert in northeast Jordan is a dry inhospitable area consisting of black basalt rock. It is surprising that very little archaeological research has been conducted there. For me this is an extra challenge, this means that as an archaeologist you are working on a new interpretation of a society. I am currently a PhD candidate on Professor Peter Akkermans’ and Dr Ahmad Al-Jallad’s research project ‘Landscapes of Survival’. My research focuses on images that have been carved into the basalt rocks. This rock art was made by nomadic peoples who roamed the desert with camels and other animals and it probably dates from about two thousand years ago.

I am making an inventory of the images in the Jebel Qurma area. Until now around 5,000 have been found – not just by me but by my colleagues too. In total, I will be going four times to the Black Desert, each time for a month’s fieldwork. That is a unique experience. You live under basic conditions with a team of archaeologists in a camp a long way away from the inhabited world. It is hot during the day and cold at night.

By intensively studying the rock art, I get close to the people who made it. Alongside human figures, there are wild animals like the lion and the oryx, which are now extinct in this area. There also are dogs, and camels in particular. These camels are often depicted in a very detailed fashion with special decorations. This could mean that they were very important to these people. I am also studying how the images were made. For a long time, it was thought that the rock art was a kind of graffiti and that it was made out of boredom, for instance. I have discovered that a whole process went into producing it. First a sketch was made with a sharp object and only then was the image carved into the rock. This indicates that the rock art really did matter to these people and that it may have meant more than we would now assume. There are still many questions to answer, but with this reasearch we can bring a long-forgotten society back to life.”

“By studying the rock art, I get close to the people who made them.”

Perspectives on the past

Research at the Faculty of Archaeology, Leiden University. 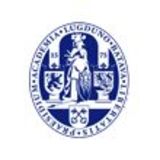