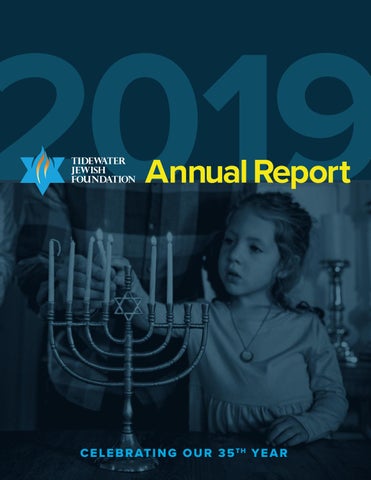 Honoring the values of tzedakah and tikkun olam, the Tidewater Jewish Foundation is dedicated to creating permanent resources to meet the challenges and needs of the Jewish community Leadership

TJF fundholders have distributed over $200 Million charitable dollars since the Foundation’s inception.

A growing community of donors and up to 3 generations of TJF’s original founding families are building enduring and impactful family legacies through philanthropy.

With a mission to ensure the future of the Tidewater Jewish community, TJF helps synagogues and other Jewish organizations grow their endowments and manage charitable assets. In addition, TJF provides grant funding for new and innovative programs throughout the Jewish community.

Founded in 1984 with a single endowment fund, TJF has since grown to over $112 Million in assets, representing charitable funds managed on behalf of individual donor advisors, family foundations, United Jewish Federation of Tidewater, and over a dozen local affiliate agencies and synagogues. 3

TJF Community Impact Grants The Foundation&#39;s grant making program plays a crucial role in the community by providing seed money for new programs and services. This year, TJF awarded $356,000, up more than 50% from last year, from its unrestricted &quot;community impact&quot; grants pool.

A Cherished Partnership TJF is honored to work in close partnership with UJFT. The two organizations are brought together by shared values and complementary goals, with TJF focused on investing in Jewish tomorrows, and UJFT providing for an enriched, vibrant Jewish community today. The Foundation also works to support the communityâ&amp;#x20AC;&amp;#x2122;s efforts to build Lion of Judah Endowments (LOJEs) and Perpetual Annual Campaign Gifts (PACEs).

LOJE donors are women in the community that have endowed their annual campaign gifts to ensure they will be made every year in perpetuity.

PACE donors have established an endowed fund for the benefit of the UJFT Annual campaign, ensuring that their legacy of support for the Tidewater Jewish community continues in perpetuity.

Investing in a Jewish Future

Simon Family Passport to Israel This endowed program was launched by the Simon Family Foundation and numerous other donors. Thanks to their generosity, four local teens traveled to Israel for educational summer and semester programs.

Faith Rose White, a graduate of Maury High School and member of the Beth El congregation was this year’s recipient of the four-year scholarship of up to $10,000 per year. The Stein Family College Scholarship was established in 2009 in memory of Arlene Stein, who did not complete college because of financial hardship.

“ I know Arlene Stein wanted to make the world a better place and I’m so appreciative of the opportunity to carry on that legacy.” –Faith Rose White, Recipient of the 2019 Stein Family Scholarship

“ Israel was an opportunity to experience the world in ways I never would have otherwise; to see the richness of our history as Jews, and the enigma of our created country, rising from the desert. Thank you, for giving me this incredible opportunity to see my world and for helping me grow into the Jew I am today.” –Jordan Parker, Recipient of the Simon Family Passport to Israel Grant

Emerging Philanthropists Council Thanks to the generous support of the Tavia &amp; Freda Gordon* Family Foundation, 14 teens learned about tzedakah by participating in a real grants process. After careful consideration of multiple grant applications, the group elected to award $500 to JFS for families to purchase food items and $500 to UJFT for the Be A Reader Program. One Happy Camper TJF partnered with the Foundation for Jewish Camp to bring the One Happy Camper program to Tidewater. This year, TJF donors and fundholders helped send 19 first time campers to 9 Jewish overnight camps. B’nai Tzedek Teen Philanthropy This program encourages teens to become involved in tzedakah by establishing a fund for Jewish charitable giving. A minimum gift of $250 is matched by TJF for a starting fund balance of $500. Teens are encouraged to make charitable distributions and learn about the needs of the Jewish community locally, in Israel and around the world.

create legacy gifts, providing a permanent source of support for the Jewish causes they care about. The program was founded on the principle that all of us, regardless of age, wealth or affiliation, can make an enduring financial impact.

“ The challenges that we face are overwhelming, but Tikkun Olam is our charge and we are obligated to do the repair work. Looking at specific actions, rather than vast challenges, can make our tasks more manageable. If we all do something, even something tiny, collectively, we can make changes in the world.” – Alene Kaufman, pictured here with her husband, Ron

The Harold Grinspoon Foundation’s investment of $14.9 million over 6.75 years has leveraged almost a billion dollars in future gifts for 58 communities across North America. (AS OF 6/30/2019) 8

million in estimated future gifts for the Tidewater Jewish community

Together, we are creating a brighter future for our community “ I’ve always believed in giving back - in both time and money - so the idea of continuing that through my estate plan just feels right to me. The greatest legacy I can leave is one of caring for my family and my community.” –Stephanie Adler Calliott

“ I hope to build a legacy by inspiring a sense of Jewish identity, community, and connection to the past &amp; present in my daughter. By building a solid foundation we can branch out and keep growing, knowing we will always have a place to return.” –Hilary Truman, pictured here with her daughter, Tati

“ Everything we do has a lasting

Simon Family Legacy Society honors those who have committed

The Tidewater Jewish Foundation was formed in 1984 when the endowment fund of the United Jewish Federation of Tidewater grew to $2 million. Today, the consolidated assets are more than $112 million. The growth in the consolidated assets managed by TJF (shown here) reflects the time frame since TJF became a separately incorporated 501(c)(3) charity in 1993. 2019 Growth of TJF Assets

TJF has been awarded a certificate of confor­mance to the Best Prac­tices under the Global Fiduciary Standard of Excellence as assessed by The Colony Group. The Advisory Pro­cess is

modeled after the Fiduciary Quality Management System, as es­tablished by the Center for Fiducia­r y Excellence, to facilitate ongoing conformity with the Standard. In the execution of The Colony Group’s four-step process, TJF documents and record­ings were reviewed, including: In­vestment Policy Statements and As­set Allocation Analyses, Investment Committee Meeting minutes, bylaws, as well as other investment gover­nance records maintained by TJF. 12

“My philosophy on work, on volunteering, on philanthropy, is all the same: Let’s not dwell on what’s wrong, but determine what the goal is and get started to see how we can get there. My legacy will be the same, to quietly help as many people in as many ways as there is time, energy and resources–whatever they may be.” –Lawrence Steingold

Investment Report for the Year Ended June 30, 2019 Equity markets continued their roller coaster ride during fiscal year 2019. After setting an all-time high in September of 2018, the S&amp;P 500 Index suffered a deep decline that culminated on Christmas Eve. The drop was just short of a 20% decline that signals a market correction. The steep decline was triggered by concerns about the trade war between US and China and a slowing global economy. Dovish rhetoric by the Federal Reserve Bank triggered a V-shaped recovery in the domestic equity market as the S&amp;P 500 rallied over 23% between December 24 and June 30. The market closed the year ending 6/30/19; up over 10%. Once again, domestic large capitalization stocks were the strongest performers as both US small cap, developed market equities, and emerging market equities lagged their larger counterparts. Surprisingly, interest rates declined dramatically during the year as the benchmark 10 year treasury declined from 2.85% to 2.00%. Economic growth began to slow during the year. Gross Domestic Product in the US ended up 2.1% year over year. Despite moderating growth, Mercer and BCA Research do not see an imminent recession. Their expectations are that growth will likely continue to the end of 2020. Since equities rarely suffer a bear market during economic expansions, positive equity returns are expected through the latter part of 2020. The “wild card” to this outlook is the potential for an escalation in the trade war. We view this as unlikely as the Trump Administration will be seeking reelection next year and such an escalation could damage the economy, thereby jeopardizing the President’s chance at a second term. The Jewish Community Endowment Pool (“JCEP”) in which the foundation is invested, rose 3.5% for the fiscal year, slightly lagging TJF’s index target of 3.6%. JCEP manages a highly risk controlled strategy whose investment philosophy is focused on capital preservation. This is exemplified by upside and downside capture statistics. Over the last 10 years, the strategy has captured only 74% of market declines and 101% of market increases as compared to the plan benchmark.

* These condensed financial summaries of the ending balances and the activities for the fiscal year ending June 30, 2019 do not include all disclosures or the presentation format required by generally accepted accounting principals (GAAP). Complete audited financial statements combining the ending balances and activities of Tidewater Jewish Foundation and its Supporting Foundations for this period, which are prepared and presented in accordance with GAAP, including all required disclosures, will be made available upon request and posted to JewishVA.org by December 31, 2019. 13

How can you strengthen Jewish tomorrows? The TJF team works with donors, their families, and often their professional advisors to develop meaningful, tax-wise philanthropic plans so they can maximize their gift’s impact

It starts with you!

Every TJF gift begins with a person or family that wants to make the world a better place.

What makes the most sense for you and your family? Cash Gifts – Used to make an impact today or set aside and allowed to grow so you can make a greater impact tomorrow

IRA Designation / Gift of Retirement Assets If you are over age 70 1/2, this is a tax advantaged gift option, particularly after recent federal tax changes

Life Estate Reserved – Transfer the deed of your home (or vacation property) to TJF, maintain lifetime use of the property, receive a tax benefit and make a greater gift Closely Held Business Interests – Gift your share of LLCs or partnership interests and avoid capital gains tax

TJF Giving Vehicles The way you package your gift depends on your goals: Do you want to include your children or other loved ones in the process? Is flexibility important? Tax savings?

Your Impact How will you make a difference?

Help your synagogue thrive today and plan for tomorrow

Support any Jewish or non-Jewish organization so that the causes and organizations you cherish can thrive today, tomorrow and for generations to come

PHILANTHROPY IS OUR TRADITION. foundation.jewishva.org The Tidewater Jewish Foundation would like to extend our sincerest appreciation to The Colony Group, LLC for their continued and generous support of this annual report