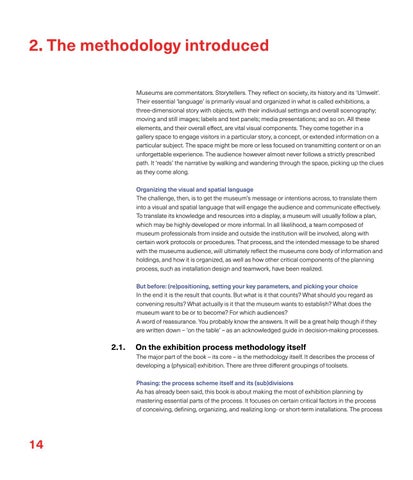 2. The methodology introduced Museums are commentators. Storytellers. They reflect on society, its history and its ‘Umwelt’. Their essential ‘language’ is primarily visual and organized in what is called exhibitions, a three-dimensional story with objects, with their individual settings and overall scenography; moving and still images; labels and text panels; media presentations; and so on. All these elements, and their overall effect, are vital visual components. They come together in a gallery space to engage visitors in a particular story, a concept, or extended information on a particular subject. The space might be more or less focused on transmitting content or on an unforgettable experience. The audience however almost never follows a strictly prescribed path. It ‘reads’ the narrative by walking and wandering through the space, picking up the clues as they come along. Organizing the visual and spatial language The challenge, then, is to get the museum’s message or intentions across, to translate them into a visual and spatial language that will engage the audience and communicate effectively. To translate its knowledge and resources into a display, a museum will usually follow a plan, which may be highly developed or more informal. In all likelihood, a team composed of museum professionals from inside and outside the institution will be involved, along with certain work protocols or procedures. That process, and the intended message to be shared with the museums audience, will ultimately reflect the museums core body of information and holdings, and how it is organized, as well as how other critical components of the planning process, such as installation design and teamwork, have been realized. But before: (re)positioning, setting your key parameters, and picking your choice In the end it is the result that counts. But what is it that counts? What should you regard as convening results? What actually is it that the museum wants to establish? What does the museum want to be or to become? For which audiences? A word of reassurance. You probably know the answers. It will be a great help though if they are written down – ‘on the table’ – as an acknowledged guide in decision-making processes.

On the exhibition process methodology itself

The major part of the book – its core – is the methodology itself. It describes the process of developing a (physical) exhibition. There are three different groupings of toolsets. Phasing: the process scheme itself and its (sub)divisions As has already been said, this book is about making the most of exhibition planning by mastering essential parts of the process. It focuses on certain critical factors in the process of conceiving, defining, organizing, and realizing long- or short-term installations. The process