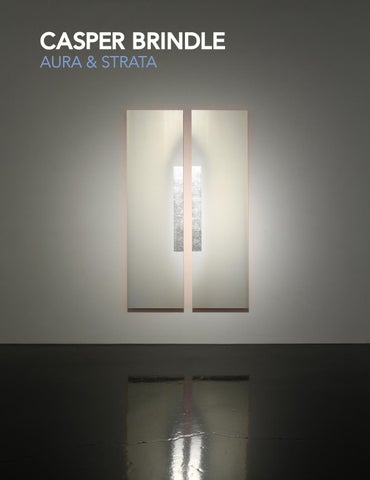 Santa Monica, CA - The William Turner Gallery is pleased to announce our upcoming solo exhibition, The Gallery is pleased to present Aura &amp;are Strata, an exhibition of new works by Jimi William GleasonTurner : Surface and Light. Jimi Gleason’s paintings enigmatic. They emphasize seductive Casper Brindle. Strata Brindle’s themysterious expressive surfaces possibilities surfaces, whichThe reveal no series trace continues of traditional paintinvestigation application. into These are of color. Brindle’s Strata paintings exist in the space where Color Field painting, Light and Space highly reactive to light, position and viewer - acting as catalysts for shifting perceptions. They are conceptualism and Finish Fetish sensibilities intersect. Enveloping the how viewer into immersive immediately understandable as paintings, though it’s difficult to imagine they were created. expanses of atmospheric color, these paintings intoxicate the senses. Utilizing supernatural, Through the use of non-traditional materials and luminescent silver deposit, Gleason createshighly works saturated colors that arereflection applied on in fine airbrushed paintings transcend that inspire an intimate the essence of layers, how weBrindle’s perceiveStrata and experience the world the representational suggestion of land and sea, evoking something more elemental, like vast &amp; around us. infinite horizons rushing across the universe. Gleason’s most recent body of work is consistent with the iridescent paintings he has developed The series is a new featuring monochromatic bridge the surface space overAura the last decade, but body marksofa work radical departure in execution. pieces Using athat silver-deposit between painting and sculpture. Like are the ethereal works ofand his Light &amp; -Space predecessors, Brindle’s Aura coat, Gleason creates paintings that glassy sheets of solid vapor that respond paintings concerned with and perception. They have a Minimalist upon first glance and react are to the play of light their environment. These newestsensibility paintings- are saturated with they appear to be austere white paintings. However, as the viewer moves around them, a nuanced brilliant colors - bright coppers, rich ceruleans and glowing golds - adding more depth to the depth ghostly layers rise to the surface and new structures emerge. alreadybecomes lustrous apparent surfaces, as which seem to emanate light from within.

Uniting hard-edge geometric forms with his sensuously luminous surfaces, Gleason boldly breaks Reductive in nature, Brindle’s Aura objects have a totemic presence inspires quiet reverence. up the picture plane into alternating fields of texture. The effect is a that hypnotic anda prismatic visual Wall mounted, piecesintersect have an in otherworldly quality - each painting is surrounded structure, wherethese light,pearlescent color and form ever-changing play. These dynamic surfaces by a glowing haloand of color, its reach extending beyond the surface onto the of wall engage the viewer urge them to explore the infinite experiential possibilities art.around it. At the center of each is an enigmatic, metallic rectangle enshrouded in a halo of pure white. These cryptic are reminiscent the mystical monolith in Stanley Kubrick’s 2001: A Space Born in forms Newport Beach, CA, of Gleason received his BA from UC Berkeley in 1985. He Odyssey, studied mysterious and powerful in their elegant simplicity. They appear to be made from liquid metal, printmaking at the San Francisco Art Institute before relocating to New York City, where he worked akin to theassistant gold leafand on Byzantine icons. Taking on a sort of secularGleason sacredness, interpretation as a photo photo technician. Returning to California, was the employed in the of these geometric forms is left up to the viewer. Are they portals to another dimension, a glimpse studio of Ed Moses for five years. Combining the disparate technical and compositional skills into the void or signifiers of some sort of universal force? Brindle’s Aura pieces pose these questions developed during his exposure to printmaking, photography and mixed-media painting, Gleason is and leave us to ponder the mysteries. now the subject of considerable curatorial and critical applause. His work is exhibited in significant public institutions, including the Armand Hammer Museum, the Long Beach Museum of Art, the CasperArt Brindle grewthe upTucson surfing Museum the beaches LA’sFrederick coast during the 1970’s and 80’s, The and Seattle Museum, of Artalong and the R. Weisman Foundation. worked briefly for Light and Space artist Eric Orr in the late 1980’s. The artist currently lives and artist’s paintings are actively collected by a growing number of major public and private collections works in Los Angeles. This marks Casper Brindle’s fourth solo exhibition with the gallery. around the world.

Catalog for the 2016 exhibition for Casper Brindle