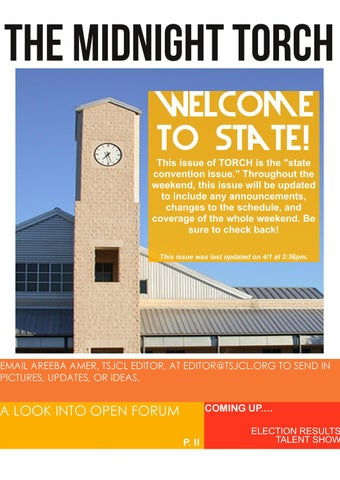 THE MIDNIGHT TORCH welcome to state!

This issue of TORCH is the "state convention issue." Throughout the weekend, this issue will be updated to include any announcements, changes to the schedule, and coverage of the whole weekend. Be sure to check back! This issue was last updated on 4/1 at 3:36pm.

A LOOK INTO OPEN FORUM

A Look into Open Forum

What is your best leadership quality?

Do you have anything you want to do or change about the TSJCL?

Hunter: Create spirit competitions or cheers at state conventions and create a TSJCL advertisement with Historian Isabella: Resolve the disconnect between officers and representative assembly John: Allow visual representation for Dramatic Interpretation, including costumes or special clothing if your peers had one complaint about you, Carl: Create an outreach program to what would it be? encourage participation and spirit competitions between Areas at state Hunter: Use “like” and “uh” too much Isabella: Get too intense and in­the­moment convention Lexi: Create unity among our large state John: Too much of a try hard Will: Make the atmosphere exciting and fun Carl: Talk too much Karen: Emphasize time managment and Lexi: Never follow one train of thought quality Will: Tell a lot of bad jokes Karen: Not social Hunter: Charisma Isabella: Tenacity John: Ability to work as a team Carl: Dedication to the arts Lexi: Passion Will: Personability Karen: Optimism

Advanced Area F, Area A, and Area B

If you have a service project, bring it Saturday during Late Art registration.

"Having competed at DI at the "When elected I will work to national level...I am able to make the Classical Civ. contests contribute valuable insight into "My goal is to pursue excellence the nature of the competition, as more appealing and less scary and continue the excellence for those of us who have never well as [work] towards "My campaign is based around that is occuring right now." done them before." improvement." bringing more Latin spirit." Candidate for 2nd VP

"As an artist, [I want to] help "As Treasurer, I would prolong "I want to increase membership inspire other students...I just the greatness that I see in this in order to expose more Latin want to spread the JCLove and program and hopefully improve students to the greatness of spirit." it even more." JCL."

All candidates at NomCom were nominated.

For the last year, I have gotten the chance to serve as Area D chair. It has made me realize that ultimately, I am just power hungry. I also really like talking to people and making productive change. I really just have one goal in mind: to have everyone leave a little happier after they go to a Latin convention. All of my other hopes just protect and make the one goal possible. The goals that I have come from the ideas that I think would benefit TSJCL. I think that building up Latin spirit is one of the best ways to let people know that they love Latin.

I want to provide the same—or even better—quality of experience to all JCL­ers as the conventions that first inspired me. If I were elected, I’d pore over and revise the academic rules to ensure that they’re comprehensive, accurate, and effective. I’d dedicate time to procure excellent judges for Dramatic Interpretation and Sight Recitation and ensure awards go smoothly at State. I’d maintain a level of care for every JCL­er as an officer. I’d like to meet with at least 10 JCL­ers I don’t know, and have in­depth conversations about the classics and offering advice

I only wish to give back to the organization that has given so much to me. I have done this through presenting myself as honorably as possible at all conventions, but it is time for me to make lasting contributions towards the perpetual improvement of TSJCL.

If elected, I wish to tailor the experience of DI to the needs and desires of its participants by polling them at the end of the convention. I wish to make any revisions to our process of choosing potential awards providers in order to save money for the organization that can be put towards other equally important aspects. I wish to streamline the awards ceremony, making it run more quickly and efficiently.

My school hosted area last year, and I loved seeing JCL behind the scenes. There is so much that we can learn and I would love the opportunity to spread that on a state level. My first idea would be to create a pen pal system. Each area would be paired with another and the area would make a box containing letters, pictures, and such to be sent to another area, and vice versa. The package would be opened at each area convention. This system would allow areas to get to know one another because we are all members of one state. I would also love to create an "Overall Award for the Classical Civ. contests". It would be given to the student who best represents creativity and a classical theme.

My biggest goal would be to reach out to a large variety of intriguing potential speakers and make colloquia as universally interesting as possible. I would also aim to encourage communication among chapters and make chapter/convention registration as painÂ­free as can be!

It would be great to increase membership in order to provide opportunities for students who can not yet experience the community of the TSJCL! Also, it could have more pancakes/other breakfast foods.Â

CANDIDATE FOR SECRETARY WILL SNIDER

The candidate for Treasurer is Karen Valdez. Her answers were not included due to submission issues. Editor's note: The above responses were taken from a series of five questions and condensed into two paragraphs. 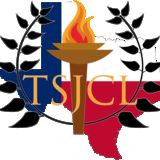 The 2017 State Convention issue of TORCH

The 2017 State Convention issue of TORCH