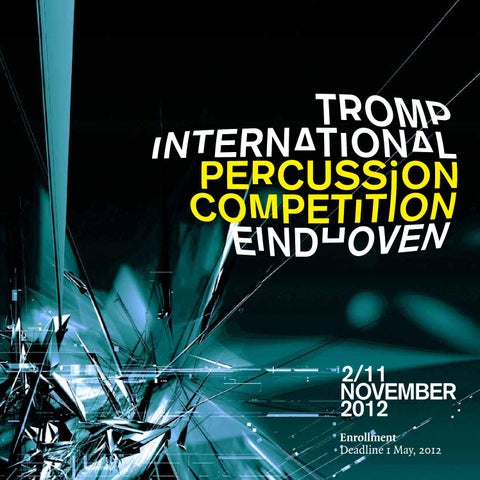 www.tromppercussion.com Tromp is member of:

Results of the Preliminary Round

by a foundation in memory of dr. Theo TROMP

laxed atmosphere as well as its warm and friend-

ly reception by the organisers and especially the

man and strong advocate of culture. Through

host families, with whom the participants will

his legacy and the generous support of the city

stay. All participants will receive board &amp; lodging

of Eindhoven, the competition has become an

as well as an reimbursement of their travelcosts.

event with international allure. Among its laure-

TROMP will provide all necessary instruments, all

ing masterclasses and a visit to the factory of

(Taiwan) and Alexej Gerassimez (Germany). All

ADAMS Musical Instruments, will be offered to

prize-winners have proven themselves to be

participants during the competition.

The competition is named for and is organized

The percussion competition is known for its re-

excellent musicians, with succesful international careers. Jury-members of the past have included

All participants will receive a professional recording

of all their performances during the competition,

which they may use for promotional purposes.

concert halls in Europe: Muziekgebouw Frits Philips Eindhoven, named after the grandson of the founder of Royal Philips Electronics. Today, Muziekgebouw Eindhoven is justifiably regarded as one of the premier European concert halls, attracting the leading musicians of our time. The ambience and its excellent acoustics have made Muziekgebouw Eindhoven an absolute favourite for audiences and performers alike. Located in Eindhoven city centre, it offers all the benefits of a modern, state-of-the-art concert hall. The constructed according to scientifically derived acoustic engineering techniques provided by the

The central event of TROMP is the international

Eindhoven University of Technology. The concert

percussion competition. But it also embodies

hall itself has thus become one of the best instru-

a weeklong percussion Festival with unique

ments for the musicians performing on its stages,

concerts and productions as well as a series of competition.

Eindhoven is the proud home of one of the finest

two auditoriums in the Muziekgebouw were

educational projects including a composition

a perfect host for the competition. www.muziekgebouweindhoven.nl

is a commissioned composition by an important

already the most demanded composer all over

composer. Composers in recent years were:

the globe. His orchestral works have been pre-

miered by the Boston Pops, the New York Phil-

harmonic and the Chicago Symphony. Muhly’s

opera, Two Boys premiered in June 2011 at the

for percussion and symphony orchestra, 2006),

Non-voting chairman of the Jury:

credits include Muhly’s scores for Joshua (2007),

quartet, 2010). Following in their footsteps with

He has also lent his skills as performer, arranger

American composer Nico Muhly, who has been

and conductor to other musicians, including

commissioned to write the obligatory double-

concerto to be performed during the finals by

An important part of every mayor competition

each of the three finalists together with renowned percussionist Colin Currie and chamber-orchestra Britten Sinfonia conducted by André de Ridder.

the front runner of the up and coming generation

Dutch composer Joey Roukens. He will write the

of Dutch composers. In recent years he received

compulsory work for timpani to be performed

commissions by the Royal Concertgebouw

Orchestra, the Asko/Schoenberg ensemble, the Storioni Festival and violinist Janine Jansen, a.o.. His percussion concerto received its premiere in May 2011 by Colin Currie, who declared it one of the five best concerto’s ever written.

A recent, unedited recording of a

One of the following works for marimba by

A recital of maximum 45 minutes, containing:

- One work for mallets;

- The compulsory work by Joey Roukens

- One work for percussion set-up.

- At least one work for mallets of one’s

2: First Round Friday 2 and Saturday 3 November 2012 Maximum duration 20 minutes A choice from -

A work for vibraphone of one’s own choice.

for Timpani ( The score will be provided to all participants by july 2012) own choice; - At least one work for set-up of one’s own choice;

Scores and recordings are available through the competition office. Candidates may propose other works for marimba by Dutch composers, but these will need to be approved by the jury in advance.

5: Finals Sunday 11 November 2012 - Nico Muhly Double Concerto (for two percussionists and orchestra). To be performed together with Colin Currie, Britten Sinfonia conducted by André de Ridder. - One work of one’s own choice. (maximum duration of 20 min). The score will be provided tot all participants by June 2012.

The first prize winner will go on tour with Britten Sinfonia &amp; Colin Currie, including performances at:

• Further engagements for recitals will be presented in 2013 and during the competition. Including performances at the fol-

(For best performance of a work by a Dutch composer during

2.3. Digital applications by e-mail are acceptable as long as

3.4. Candidates who are not admitted to the next round

they contain all required information and supporting

of the competition will be provided the opportunity to

discuss their performance with members of the jury, time

sion Competition Eindhoven (“the competition”) will

2.4. The competition jury will individually audition the appli-

cants on the basis of anonymous copies of their recordings.

3.5. Should a candidate be a regular student of one of the

Joint conclusions will be announced before 1 July, 2012.

members of the jury, the latter will abstain from the jury

1.2. The official language of the competition is English.

2.5. No more than 30 percussionists will be invited to

deliberations in his or her respect. attend the competition rounds in Eindhoven with another

3.6. The jury will not, under any circumstances, permit

1.3. The competition is open to professional percussionists

5 percussionists granted a backup-position, ie. they will be

the stated performance time to be exceeded.

of all nationalities who:

admitted in case a previously selected participant has to

a) are maximum 30 years of age, at the start of the

competition. b) have completed their professional education or are currently in their final year.

2.6. Percussionist accepted for participation will be

compete in the final round.

required to pay an entrance fee of 200 Euro, not later than

1.4. All decisions of the jury shall be final, and no cor-

3.8. The jury has the right not to grant a prize or to let two

respondence will be entered into regarding any such

to candidates who withdraw from the competition after

candidates share a prize (with exception of the first prize).

acceptance. 2.7 All participants shall provide the organisation with

a) A completely filled-in &amp; signed application form b) A copy of the applicant’s passport c) A short resume describing training and experience d) Two recent, high-quality photographs in a digital format (Jpeg or Gif) that are suitable for publication and free of copyright e) Two letters of recommendation; f) A recent recording of a live performance containing: •

One work for mallets;

One work for percussion set-up.

The recording clearly labelling its contents as well as the performer’s name should be of professional quality (CD or DVD). The recording must be recorded in real time and must not have been edited or altered in any way. The competition reserves the right to disqualify studio enhanced or modified recordings. This recording can also be submitted by e-mail in a common digital format (wav, mp3 or m4a).

4.1. Candidates must clearly state their complete programme for each round on their application forms,

3. The competition 3.1. All rounds of the competition will be held at Muziekgebouw Eindhoven. The playing schedule is as follows: a) First Round, Saturday and Sunday 2/3 November; b) Second Round, Monday 5 November c) Semi-Finals, Wednesday 7 November d) Finals, Sunday 11 November. 3.2. The sequence of performance will be decided by a draw of lots. 3.3. Contestants shall not communicate with jury members during the competition, nor shall any other person communicate with the jury members on behalf of any competitor. Violation of this rule will result in automatic disqualification from the competition.

4.2. The artistic choice and composition of the programme will also be part of the jury’s judgement. 4.3. Preliminary Round • A recording of a (live) performance (see 2.2, f) 4.4. First Round • Playing time: maximum 20 min (including intervals). -

A work for vibraphone of one’s own choice.

4.5. Second Round One of the following works for marimba by a Dutch composer: -

for further study, participation in Competitions and/or

the purchase of instruments;

Options for recitals within two years after the

Candidates may propose other works for marimba by Dutch 5.3. Third prize

- A sum of 7,000 Euro of which 3,000 Euro is reserved for further study, participation in competitions and/or the

purchase of instruments. - Options for recitals within two years after the

- The compulsory work by Joey Roukens for Timpani

At least one work for mallets of one’s own choice;

At least one work for set-up of one’s own choice.

can be mailed upon request; d) All meals from 29 Monday October till Sunday 11 November; e) A recording of their performances during the competi-

composers, but these will need to be approved by the jury

ments and cover the costs themselves. A list of hotels

tion for promotional purposes; f) For the winners, the board &amp; lodging arrangements (sub c &amp; d) will be extended up to the end of the TROMP Tour. g) Practicing and stage-rehearsal facilities will be available, but only for limited periods of time. Rehearsal-time will be divided equally among contestants, a schedule will

5.4 MCN - Willem Vos award for the best performance of a work by a Dutch composer during the Second Round.

be provided before arrival. All rehearsal mallet-instruments will be by Adams only.

the purchase of scores at Donemus pulishing.

is the sole responsibility of each competitor. TROMP accepts 5.5 Friends of TROMP Audience Award

no liability of any kind whatsoever for any personal illness

- A sum of 3.000 Euro reserved for study, participation in

or injury sustained by the competitor, nor for loss or dam-

competitions and/or the purchase of instruments. 4.8. During the competition candidates may play each work only once (excluding the preliminary round).

age to a competitor’s belongings, including instruments, during transit or while at the competition.

5.6 Friends of TROMP encouragement prize - A sum of 1.000 Euro reserved for study, participation in

4.9. Candidates may change their proposed programme

competitions and/or the purchase of instruments.

7. Stated 7.1. By signing and submitting the application form, applicants state their agreement: a) with all articles in the regulations; b) with all ensuing engagements as part of any prize. This

5. Prizes The Tromp International Percussion Competition Eindhoven will award the following prizes: 5.1. First Prize - A sum of 15,000 Euro, of which 7,000 Euro is reserved for further study, participation in competitions and/or the purchase of instruments; - A concert tour from November 12 till 29 2012 and 21 till 31 May 2013; - Further options for recitals within two years after the competition.

includes the Winners Tour from 12-29 November; c) that all concert and recording engagements obtained

6. Facilities 6.1. The competition will supply the following to all participants: a) R eimbursement of pre-agreed reasonable travel

by TROMP or its designates as part of the first prize will not be subject to any fee payable to the prize-winner’s current or future artist management; d) that TROMP is authorized to record, videotape, film, broadcast, or photograph any competition concerts or

expenses to and from the Netherlands with a maximum

events for any purpose, without payment of any fee. All

of € 800,-. (proposed travel arrangements should be

rights, including copyright in such media shall vest in and

be owned by the competition in perpetuity.

b) Local transportation to Eindhoven from Schiphol Airport or Eindhoven Airport; c) Accommodation in private family homes, max. two persons per room, in the Eindhoven area from 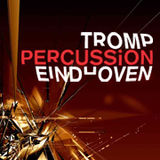