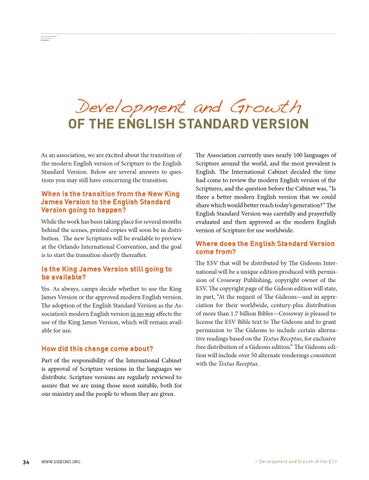 When is the transition from the New King James Version to the English Standard Version going to happen? While the work has been taking place for several months behind the scenes, printed copies will soon be in distribution. The new Scriptures will be available to preview at the Orlando International Convention, and the goal is to start the transition shortly thereafter.

How did this change come about? Part of the responsibility of the International Cabinet is approval of Scripture versions in the languages we distribute. Scripture versions are regularly reviewed to assure that we are using those most suitable, both for our ministry and the people to whom they are given.

Where does the English Standard Version come from? The ESV that will be distributed by The Gideons International will be a unique edition produced with permission of Crossway Publishing, copyright owner of the ESV. The copyright page of the Gideon edition will state, in part, “At the request of The Gideons—and in appreciation for their worldwide, century-plus distribution of more than 1.7 billion Bibles—Crossway is pleased to license the ESV Bible text to The Gideons and to grant permission to The Gideons to include certain alternative readings based on the Textus Receptus, for exclusive free distribution of a Gideons edition.” The Gideons edition will include over 50 alternate renderings consistent with the Textus Receptus.