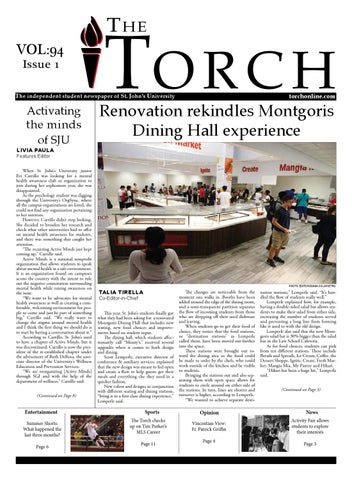 Activating the minds of SJU

When St. John’s University junior Evi Carrillo was looking for a mental health awareness club or organization to join during her sophomore year, she was disappointed. As the psychology student was digging through the University’s OrgSync, where all the campus organizations are listed, she could not find any organization pertaining to her interests. However, Carrillo didn’t stop looking. She decided to broaden her research and check what other universities had to offer on mental health awareness for students, and there was something that caught her attention. “The recurring Active Minds just kept coming up,” Carrillo said. Active Minds is a national nonprofit organization that allows students to speak about mental health in a safe environment. It is an organization found on campuses across the country with the intent to rule out the negative connotation surrounding mental health while raising awareness on the issue. “We want to be advocates for mental health awareness as well as creating a comfortable, welcoming environment for people to come and just be part of something big,” Carrillo said. “We really want to change the stigma around mental health and I think the first thing we should do is to start by having a conversation about it.” According to Carrillo, St. John’s used to have a chapter of Active Minds, but it was discontinued. Carrillo is now the president of the re-established chapter under the advisement of Ruth DeRosa, the associate director of the University’s Wellness Education and Prevention Services. “We are reorganizing [Active Minds] through SGI and with the help of the department of wellness,” Carrillo said. (Continued on Page 8)

This year, St. John’s students finally got what they had been asking for: a renovated Montgoris Dining Hall that includes new seating, new food choices and improvements based on student input. The dining hall, which students affectionately call “Monty’s,” received several upgrades when it comes to both design and dining. Scott Lemperle, executive director of conference & auxiliary services, explained that the new design was meant to feel open and create a flow to help guests get their meals and everything else they need in a quicker fashion. New colors and designs in conjunction with different seating and dining stations, “bring it to a first class dining experience,” Lemperle said.

The changes are noticeable from the moment one walks in. Booths have been added around the edge of the dining room, and a semi-transparent partition separates the flow of incoming students from those who are dropping off their used dishware and leaving. When students go to get their food of choice, they notice that the food stations, or “destination stations” as Lemperle called them, have been moved out further into the space. These stations were brought out toward the dining area so the food could be made to order by the chefs, who could work outside of the kitchen and be visible to students. Bringing the stations out and also separating them with open space allows for students to circle around on either side of the stations. In turn, lines are shorter and turnover is higher, according to Lemperle. “We wanted to achieve separate desti-

nation stations,” Lemperle said. “It’s handled the flow of students really well.” Lemperle explained how, for example, having a double-sided salad bar allows students to make their salad from either side, increasing the number of students served and preventing a long line from forming like it used to with the old design. Lemperle also said that the new Montgoris salad bar is 30% bigger than the salad bar in the Law School Cafeteria. As for food choices, students can pick from ten different stations. These include Breads and Spreads, Ice Cream, Coffee, the Dessert Shoppe, Ignite, Create, Fresh Market, Mangia Mia, My Pantry and Hikari. “Hikari has been a huge hit,” Lemperle said. (Continued on Page 3)