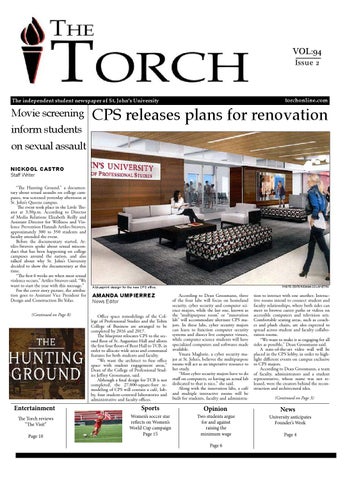 “The Hunting Ground,” a documentary about sexual assaults on college campuses, was screened yesterday afternoon at St. John’s Queens campus. The event took place in the Little Theater at 3:30p.m. According to Director of Media Relations Elizabeth Reilly and Assistant Director for Wellness and Violence Prevention Hannah Artiles-Stravers, approximately 300 to 350 students and faculty attended the event. Before the documentary started, Artiles-Stravers spoke about sexual misconduct that has been happening on college campuses around the nation, and also talked about why St. John’s University decided to show the documentary at this time. “The first 6 weeks are when most sexual violence occurs,” Artiles-Stravers said, “We want to start the year with this message.” For the cover story picture, the attribution goes to Assistant Vice President for Design and Construction Ibi Yolas. (Continued on Page 8)

A blueprint design for the new CPS office.

Office space remodelings of the College of Professional Studies and the Tobin College of Business are arranged to be completed by 2016 and 2017. The blueprint relocates CPS to the second floor of St. Augustine Hall and allotts the first four floors of Bent Hall to TCB, in order to allocate wide areas and communal features for both students and faculty. “We want the architect to fuse office space with student engagement areas,” Dean of the College of Professional Studies Jeffrey Grossmann, said. Although a final design for TCB is not completed, the 27,000-square-foot remodeling of CPS will contain a café, lobby, four student-centered laboratories and administrative and faculty offices.

The Torch reviews “The Visit”

According to Dean Grossmann, three of the four labs will focus on homeland security, cyber security and computer science majors, while the last one, known as the “multipurpose room” or “innovation lab” will accommodate alternate CPS majors. In these labs, cyber security majors can learn to function computer security systems and dissect live computer viruses, while computer science students will have specialized computers and softwares made available. Ymara Maglorie, a cyber security major at St. John’s, believes the multipurpose rooms will act as an imperative resource to her study. “Most cyber security majors have to do stuff on computers, so having an actual lab dedicated to that is nice,” she said. Along with the innovation labs, a café and multiple interactive rooms will be built for students, faculty and administra-

tion to interact with one another. Interactive rooms intend to connect student and faculty relationships, where both sides can meet to browse career paths or videos on accessible computers and television sets. Comfortable seating areas, such as couches and plush chairs, are also expected to spread across student and faculty collaboration rooms. “We want to make it as engaging for all sides as possible,” Dean Grossmann said. A state-of-the-art video wall will be placed in the CPS lobby, in order to highlight different events on campus exclusive to CPS majors. According to Dean Grossmann, a team of faculty, administrators and a student representative, whose name was not released, were the creators behind the reconstruction and architectural idea. (Continued on Page 3) 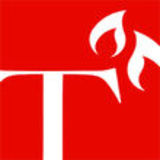