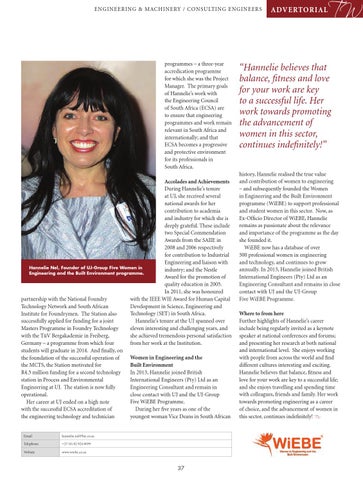 programmes – a three-year accredication programme for which she was the Project Manager. The primary goals of Hannelie’s work with the Engineering Council of South Africa (ECSA) are to ensure that engineering programmes and work remain relevant in South Africa and internationally; and that ECSA becomes a progressive and protective environment for its professionals in South Africa. Accolades and Achievements During Hannelie’s tenure at UJ, she received several national awards for her contribution to academia and industry for which she is deeply grateful. These include two Special Commendation Awards from the SAIIE in 2008 and 2006 respectively for contribution to Industrial Engineering and liaison with Hannelie Nel, Founder of UJ-Group Five Women in industry; and the Nestle Engineering and the Built Environment programme. Award for the promotion of quality education in 2005. In 2011, she was honoured with the IEEE WIE Award for Human Capital partnership with the National Foundry Development in Science, Engineering and Technology Network and South African Technology (SET) in South Africa. Institute for Foundrymen. The Station also Hannelie’s tenure at the UJ spanned over successfully applied for funding for a joint eleven interesting and challenging years, and Masters Programme in Foundry Technology she achieved tremendous personal satisfaction with the TüV Bergakademie in Freiberg, from her work at the Institution. Germany – a programme from which four students will graduate in 2014. And finally, on Women in Engineering and the the foundation of the successful operation of Built Environment the MCTS, the Station motivated for In 2013, Hannelie joined British R4.5 million funding for a second technology International Engineers (Pty) Ltd as an station in Process and Environmental Engineering Consultant and remain in Engineering at UJ. The station is now fully close contact with UJ and the UJ-Group operational. Five WiEBE Programme. Her career at UJ ended on a high note During her five years as one of the with the successful ECSA accreditation of youngest woman Vice Deans in South African the engineering technology and technician 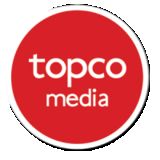