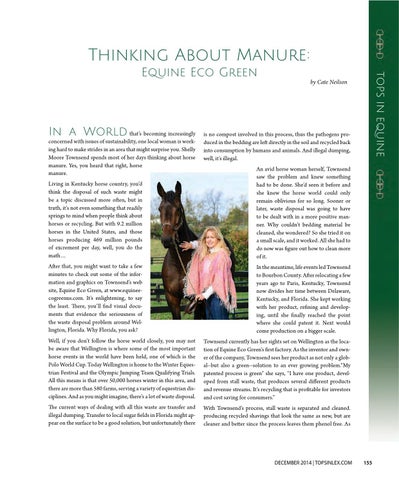 that’s becoming increasingly concerned with issues of sustainability, one local woman is working hard to make strides in an area that might surprise you. Shelly Moore Townsend spends most of her days thinking about horse manure. Yes, you heard that right, horse manure.

is no compost involved in this process, thus the pathogens produced in the bedding are left directly in the soil and recycled back into consumption by humans and animals. And illegal dumping, well, it’s illegal.

Living in Kentucky horse country, you’d think the disposal of such waste might be a topic discussed more often, but in truth, it’s not even something that readily springs to mind when people think about horses or recycling. But with 9.2 million horses in the United States, and those horses producing 469 million pounds of excrement per day, well, you do the math…

An avid horse woman herself, Townsend saw the problem and knew something had to be done. She’d seen it before and she knew the horse world could only remain oblivious for so long. Sooner or later, waste disposal was going to have to be dealt with in a more positive manner. Why couldn’t bedding material be cleaned, she wondered? So she tried it on a small scale, and it worked. All she had to do now was figure out how to clean more of it.

After that, you might want to take a few minutes to check out some of the information and graphics on Townsend’s web site, Equine Eco Green, at www.equineecogreenus.com. It’s enlightening, to say the least. There, you’ll find visual documents that evidence the seriousness of the waste disposal problem around Wellington, Florida. Why Florida, you ask?

In the meantime, life events led Townsend to Bourbon County. After relocating a few years ago to Paris, Kentucky, Townsend now divides her time between Delaware, Kentucky, and Florida. She kept working with her product, refining and developing, until she finally reached the point where she could patent it. Next would come production on a bigger scale.

Well, if you don’t follow the horse world closely, you may not be aware that Wellington is where some of the most important horse events in the world have been held, one of which is the Polo World Cup. Today Wellington is home to the Winter Equestrian Festival and the Olympic Jumping Team Qualifying Trials. All this means is that over 50,000 horses winter in this area, and there are more than 580 farms, serving a variety of equestrian disciplines. And as you might imagine, there’s a lot of waste disposal.

Townsend currently has her sights set on Wellington as the location of Equine Eco Green’s first factory. As the inventor and owner of the company, Townsend sees her product as not only a global--but also a green--solution to an ever growing problem.“My patented process is green” she says, “I have one product, developed from stall waste, that produces several different products and revenue streams. It’s recycling that is profitable for investors and cost saving for consumers.”

The current ways of dealing with all this waste are transfer and illegal dumping. Transfer to local sugar fields in Florida might appear on the surface to be a good solution, but unfortunately there

With Townsend’s process, stall waste is separated and cleaned. producing recycled shavings that look the same as new, but are cleaner and better since the process leaves them phenol free. As

Our Haute Holidays issue includes holiday fashion, gifts galore, a feature on The Glitz and much more. Enjoy!

Our Haute Holidays issue includes holiday fashion, gifts galore, a feature on The Glitz and much more. Enjoy!