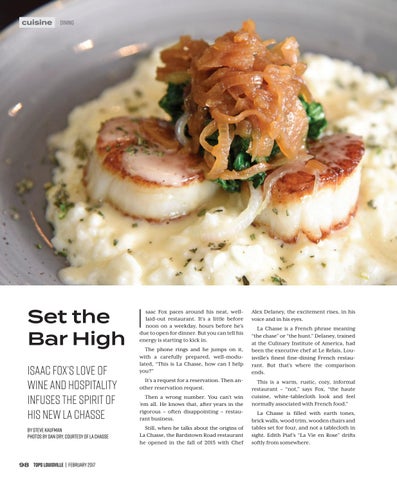 Set the Bar High Isaac Fox’s love of wine and hospitality infuses the spirit of his new La Chasse By Steve Kaufman Photos by Dan Dry, Courtesy of La Chasse

saac Fox paces around his neat, welllaid-out restaurant. It’s a little before noon on a weekday, hours before he’s due to open for dinner. But you can tell his energy is starting to kick in. The phone rings and he jumps on it, with a carefully prepared, well-modulated, “This is La Chasse, how can I help you?” It’s a request for a reservation. Then another reservation request. Then a wrong number. You can’t win ’em all. He knows that, after years in the rigorous – often disappointing – restaurant business. Still, when he talks about the origins of La Chasse, the Bardstown Road restaurant he opened in the fall of 2015 with Chef

Alex Delaney, the excitement rises, in his voice and in his eyes. La Chasse is a French phrase meaning “the chase” or “the hunt.” Delaney, trained at the Culinary Institute of America, had been the executive chef at Le Relais, Louisville’s finest fine-dining French restaurant. But that’s where the comparison ends. This is a warm, rustic, cozy, informal restaurant – “not,” says Fox, “the haute cuisine, white-tablecloth look and feel normally associated with French food.” La Chasse is filled with earth tones, brick walls, wood trim, wooden chairs and tables set for four, and not a tablecloth in sight. Edith Piaf’s “La Vie en Rose” drifts softly from somewhere. 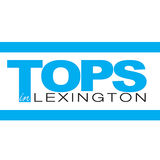