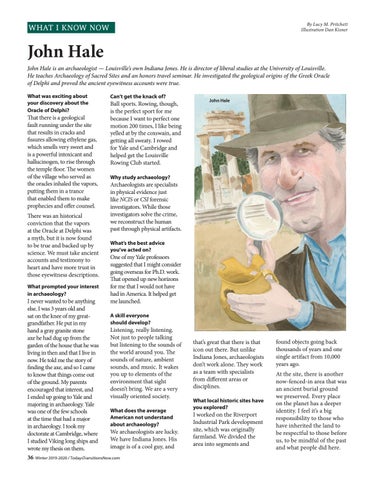 WHAT I KNOW NOW

John Hale John Hale is an archaeologist — Louisville’s own Indiana Jones. He is director of liberal studies at the University of Louisville. He teaches Archaeology of Sacred Sites and an honors travel seminar. He investigated the geological origins of the Greek Oracle of Delphi and proved the ancient eyewitness accounts were true. What was exciting about your discovery about the Oracle of Delphi?

That there is a geological fault running under the site that results in cracks and fissures allowing ethylene gas, which smells very sweet and is a powerful intoxicant and hallucinogen, to rise through the temple floor. The women of the village who served as the oracles inhaled the vapors, putting them in a trance that enabled them to make prophecies and offer counsel. There was an historical conviction that the vapors at the Oracle at Delphi was a myth, but it is now found to be true and backed up by science. We must take ancient accounts and testimony to heart and have more trust in those eyewitness descriptions. What prompted your interest in archaeology?

Can’t get the knack of?

Ball sports. Rowing, though, is the perfect sport for me because I want to perfect one motion 200 times, I like being yelled at by the coxswain, and getting all sweaty. I rowed for Yale and Cambridge and helped get the Louisville Rowing Club started.

Archaeologists are specialists in physical evidence just like NCIS or CSI forensic investigators. While those investigators solve the crime, we reconstruct the human past through physical artifacts. What’s the best advice you’ve acted on?

One of my Yale professors suggested that I might consider going overseas for Ph.D. work. That opened up new horizons for me that I would not have had in America. It helped get me launched.

I never wanted to be anything else. I was 3 years old and A skill everyone sat on the knee of my greatshould develop? grandfather. He put in my Listening, really listening. hand a gray granite stone Not just to people talking axe he had dug up from the but listening to the sounds of garden of the house that he was the world around you. The living in then and that I live in sounds of nature, ambient now. He told me the story of sounds, and music. It wakes finding the axe, and so I came you up to elements of the to know that things come out environment that sight of the ground. My parents doesn’t bring. We are a very encouraged that interest, and visually oriented society. I ended up going to Yale and majoring in archaeology. Yale What does the average was one of the few schools American not understand at the time that had a major about archaeology? in archaeology. I took my We archaeologists are lucky. doctorate at Cambridge, where We have Indiana Jones. His I studied Viking long ships and image is of a cool guy, and wrote my thesis on them. 36 Winter 2019-2020 / TodaysTransitionsNow.com

that’s great that there is that icon out there. But unlike Indiana Jones, archaeologists don’t work alone. They work as a team with specialists from different areas or disciplines. What local historic sites have you explored?

I worked on the Riverport Industrial Park development site, which was originally farmland. We divided the area into segments and

found objects going back thousands of years and one single artifact from 10,000 years ago. At the site, there is another now-fenced-in area that was an ancient burial ground we preserved. Every place on the planet has a deeper identity. I feel it’s a big responsibility to those who have inherited the land to be respectful to those before us, to be mindful of the past and what people did here.