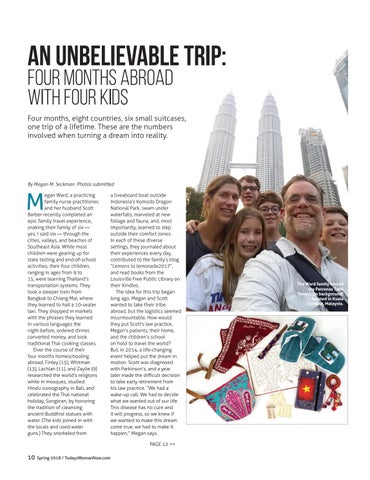 Four months, eight countries, six small suitcases, one trip of a lifetime. These are the numbers involved when turning a dream into reality.

egan Ward, a practicing family nurse practitioner, and her husband Scott Barber recently completed an epic family travel experience, snaking their family of six — yes, I said six — through the cities, valleys, and beaches of Southeast Asia. While most children were gearing up for state testing and end-of-school activities, their four children, ranging in ages from 9 to 15, were learning Thailand’s transportation systems. They took a sleeper train from Bangkok to Chiang Mai, where they learned to hail a 10-seater taxi. They shopped in markets with the phrases they learned in various languages the night before, ordered dinner, converted money, and took traditional Thai cooking classes. Over the course of their four months homeschooling abroad, Finley (15), Whitman (13), Lachlan (11), and Zaylie (9) researched the world’s religions while in mosques, studied Hindu iconography in Bali, and celebrated the Thai national holiday, Songkran, by honoring the tradition of cleansing ancient Buddhist statues with water. (The kids joined in with the locals and used water guns.) They snorkeled from

a liveaboard boat outside Indonesia’s Komodo Dragon National Park, swam under waterfalls, marveled at new foliage and fauna, and, most importantly, learned to step outside their comfort zones. In each of these diverse settings, they journaled about their experiences every day, contributed to the family’s blog “Lemons to lemonade2017”, and read books from the Louisville Free Public Library on their Kindles. The idea for this trip began long ago. Megan and Scott wanted to take their tribe abroad, but the logistics seemed insurmountable. How would they put Scott’s law practice, Megan’s patients, their home, and the children’s school on hold to travel the world? But, in 2014, a life-changing event helped put the dream in motion. Scott was diagnosed with Parkinson’s, and a year later made the difficult decision to take early retirement from his law practice. “We had a wake-up call. We had to decide what we wanted out of our life. This disease has no cure and it will progress, so we knew if we wanted to make this dream come true, we had to make it happen,” Megan says. PAGE 12 >>