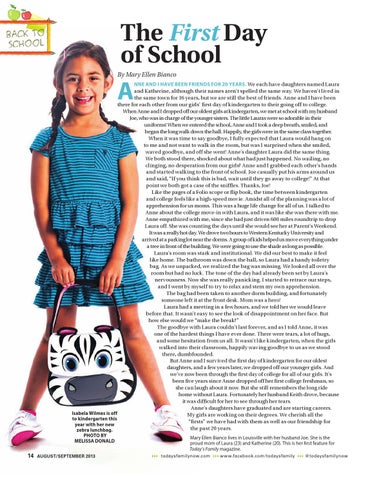 The First Day of School By Mary Ellen Bianco

nne and I have been friends for 20 years. We each have daughters named Laura and Katherine, although their names aren’t spelled the same way. We haven’t lived in the same town for 16 years, but we are still the best of friends. Anne and I have been there for each other from our girls’ first day of kindergarten to their going off to college. When Anne and I dropped off our oldest girls at kindergarten, we met at school with my husband Joe, who was in charge of the younger sisters. The little Lauras were so adorable in their uniforms! When we entered the school, Anne and I took a deep breath, smiled, and began the long walk down the hall. Happily, the girls were in the same class together. When it was time to say goodbye, I fully expected that Laura would hang on to me and not want to walk in the room, but was I surprised when she smiled, waved goodbye, and off she went! Anne’s daughter Laura did the same thing. We both stood there, shocked about what had just happened. No wailing, no clinging, no desperation from our girls? Anne and I grabbed each other’s hands and started walking to the front of school. Joe casually put his arms around us and said, “If you think this is bad, wait until they go away to college!” At that point we both got a case of the sniffles. Thanks, Joe! Like the pages of a Folio scope or flip book, the time between kindergarten and college feels like a high-speed movie. Amidst all of the planning was a lot of apprehension for us moms. This was a huge life change for all of us. I talked to Anne about the college move-in with Laura, and it was like she was there with me. Anne empathized with me, since she had just driven 600 miles roundtrip to drop Laura off. She was counting the days until she would see her at Parent’s Weekend. It was a really hot day. We drove two hours to Western Kentucky University and arrived at a parking lot near the dorms. A group of kids helped us move everything under a tree in front of the building. We were going to use the shade as long as possible. Laura’s room was stark and institutional. We did our best to make it feel like home. The bathroom was down the hall, so Laura had a handy toiletry bag. As we unpacked, we realized the bag was missing. We looked all over the room but had no luck. The tone of the day had already been set by Laura’s nervousness. Now she was really panicking. I started to retrace our steps, and I went by myself to try to relax and stem my own apprehension. The bag had been taken to another dorm building, and fortunately someone left it at the front desk. Mom was a hero! Laura had a meeting in a few hours, and we told her we would leave before that. It wasn’t easy to see the look of disappointment on her face. But how else would we “make the break?” The goodbye with Laura couldn’t last forever, and as I told Anne, it was one of the hardest things I have ever done. There were tears, a lot of hugs, and some hesitation from us all. It wasn’t like kindergarten, when the girls walked into their classroom, happily waving goodbye to us as we stood there, dumbfounded. But Anne and I survived the first day of kindergarten for our oldest daughters, and a few years later, we dropped off our younger girls. And we’ve now been through the first day of college for all of our girls. It’s been five years since Anne dropped off her first college freshman, so she can laugh about it now. But she still remembers the long ride home without Laura. Fortunately her husband Keith drove, because it was difficult for her to see through her tears. Anne’s daughters have graduated and are starting careers. Isabela Wilmes is off My girls are working on their degrees. We cherish all the to kindergarten this “firsts” we have had with them as well as our friendship for year with her new the past 20 years. zebra lunchbag. PHOTO BY MELISSA DONALD

Mary Ellen Bianco lives in Louisville with her husband Joe. She is the proud mom of Laura (23) and Katherine (20). This is her first feature for Today’s Family magazine. 4 4 4 todaysfamilynow.com 4 4 4www.facebook.com /todaysfamily 4 4 4 @todaysfamilynow