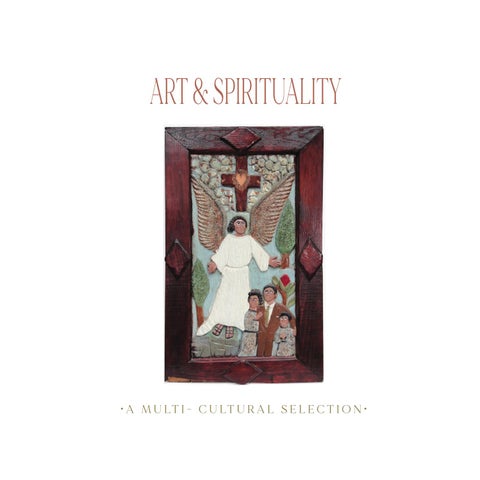 INTRODUCTION Keny Galleries’ exhibition entitled, Art and Spirituality: A Multi-Cultural Selection includes work by exceptional artists created from the 1820’s through 1992. The work has been chosen from diverse cultures including African-American, Hispanic-American, Native American and Euro-American artists. These nationally recognized artists have created artistic expressions of enduring resonance in their works related to specific religious beliefs, rituals and unique expressions of non-denominational spirituality. Our exhibition is in honor of the one person exhibition, Elijah Pierce’s America, at the prestigious Barnes Foundation in Philadelphia which opened September 27, 2020 and is on view through January 10, 2021. We assisted in the selection of numerous carvings for this exhibition. Our exhibition will also be a celebration of the 100th anniversary of the passage of the 19th Amendment of the United States Constitution, which allowed women to vote which was finalized on August 26, 1920. Five of the twelve artists included in our exhibition are women. At a challenging time for our country, spirituality in diverse forms will bolster our strength and hope for a prosperous, egalitarian future for all Americans. Hopefully, these extraordinary works of art will be inspirational to those who view them. Timothy C. Keny

Joyous Color of the East Side

“…In their complexity, visual intensity and quality of craftsmanship, such works simply dispel the idea that folk art is innocent birdsong. They are as much a part of the story of high aesthetic effort in America as any painting or sculpture. Most of the finest works of art made by women in the late Nineteenth Century came from people who had no idea at all about a career as a professional artist- including the wives and daughters of Amish farmers.” Robert Hughes The Art of the Quilt San Francisco Museum of Art, 1990, p. 19

“Rafael Aragon- his first name, Jose, is often omitted to distinguish him more clearly from the other Aragon- worked slightly later and has many similar characteristics, he does not so often sign or letter his paintings, and he seems to use parallel lines more than cross-hatching, thus suggesting woodcut rather than engraving. Like Jose Aragon and the A. J. Santero, Rafael Aragon works almost entirely in two dimensions, rarely becoming serious about attempting to round his figures or provide the illusion of a background. The decorative devices that fill out the panel are highly stylized, as are most of the attributes of the saints, and all in all he conveys the meaning of the saint to the devout mind rather than the saint’s earthly appearance to the physical eye.” Thomas J. Steele, S. J. Santos and Saints: The Religious Folk Art of Hispanic New Mexico Ancient City Press, Santa Fe, New Mexico: 1974. P. 15-16

‘He has been described as a ‘primitive, a santero, an ‘outsider artist,’ his carvings compared to Meso-American, South Pacific, 11th century Romanesque, Byzantine, renaissance, even German Expressionist.” But no one questions the beauty and power of their lines and mass, or the aesthetic pleasure they evoke. Differing from santero tradition from which it evolved, his work is secular in its expressions of universal aspects of humanity- grief, love, jealously, etc. The style is unmistakable and not easily copied. They are often described as undulating.” Mildred Tolbert Patrocino Barela Owings-Dewey Fine Art Santa Fe, New Mexico, 2006, p.5-6

“…Beginning in 1918, Baumann was in Santa Fe for most of four years, during which his “talent and skill came to full flower: the brilliant simplicity and subtlety of color in the surrounding landscape inspired him to become an innovator and an acknowledged master of his art… The fluid contours and massed forms of San Geronimo- Taos, one in a series of richly complex color woodcuts Baumann made between 1918 and 1922, reflects his study in Munich and his encounter with Jugendstil: simultaneously, the luminous color proclaims his joyous response to a new environment. “ Clinton Adams Printmaking in New Mexico, 1880-1990 p.16-17.

“Paris doesn’t have the old enchantment for me. I suppose I need another kind of reality. …Art will go where energy is. I find a great deal of energy in the Caribbean. …It’s like a volcano there; there’s something underneath there that smolders.” (Romare Bearden) Sally Price & Richard Price Romare Bearden “The Caribbean Dimension”, p.45 University of Pennsylvania Press, 2006

“Ruth Fine states, pertaining to this New York series: “Midtown Sunset, (Midtown) exemplifies works that essentially are watercolors with collage. City Lites takes that one step further. Entirely in watercolor and inks, it highlights Bearden’s bleaching techniques; the most brilliant light areas appear to have been made this way (rather than a more traditional method with water).” (Ruth Fine, p.110) Ruth Fine The Art of Romare Bearden National Gallery of Art Washington, D.C., 2004-2005

“It is a rare occurrence when you come upon a body of art that engages us in such a fresh, unencumbered way that it pins our eyes to the deeper nature of art. Sometimes one discovers such work in the unlikeliest of places, made under the unlikeliest of conditions by the unlikeliest of people, an art forged out of self-reliance and a personal vision rather than history and the dictates of a discipline. The body of work Castle left behind when he died in 1977 is remarkable in its stark, guileless beauty and inventiveness. His output included atmospheric, often haunting interior and outdoor scenes, exquisitely clever constructions of found materials, and a playful yet deliberate abstract art based on geometric patterning. Chris Schnoor James Castle: Art and Existence J, Crist Gallery, 2004

“Into this religious tradition and physical setting (Laura places the Navajo people): “Moving about in loneliness, though never lonely, in dignity and happiness, with song in their hearts and on their lips, in harmony with the great forces of nature, are the Dinéh- People of the Earth.” Lee D. Witkin and Barbara London The Photograph Collector’s Guide

“It is through Kloss’ depiction of Indian ceremonies and Penitente rituals that she has most indelibly established her identity as an artist. When in such subjects she avoids stepping over the fine line that separates romantic myth from touristic, Kloss achieves arresting images that fasten themselves in our memory. Penitente Fires (1939) is among the finest of such prints. Through emphatic contrasts of black and white, she evokes a sense of the deep, black night; through astute elimination of extraneous detail and the compelling perspective of long shadows, she centers the viewer’s eye upon the radiant light of hidden fires, thus creating a sense of mystery about the unseen events that take place beyond the dark, adobe walls.” Clinton Adams Gene Kloss, Print Retrospective The Harwood Foundation Museum of the University of New Mexico 7/29 – 9/24, 1994, p.7

“Quah Ah’s art is an art of radiance and tranquility. It is possessed of delicacy and grace, and much music. It is unequalled at conveying the dignity, the serenity, the great earnestness and wholehearted sincerity of the Pueblo ceremonial and the Pueblo people. Quah Ah’s work is not ever spectacular or striking, but is completely unpretentious and authentic.” Dorothy Dunn, American Indian Painting of the Southwest and Plains Areas, p.210

“Elijah Pierce is one of the most significant African American folk artists of our time. In 1992 on the occasion of the one-hundredth anniversary of his birth, it is important to recognize his role in African American Art, culture, and history. During his lifetime Pierce played a central role in his community; he was an articulate and thoughtful interpreter of his surroundings, and his art reflected and told the story of his times.“ John F. Moe “Your Life Is a Book”: The Artistic Legacy of Elijah Pierce Elijah Pierce: Woodcarver Columbus Museum of Art, 1992

“Elijah Pierce’s art engaged with human experience in all its variety, encompassing life’s trials and triumphs, the worst and best of our behaviors...Rich in detail, loaded with meaning, his renditions offered solace and challenged viewers to do better. They continue to invite reflection and urge us- as individuals and as a society- to work toward the common good.” Zoe Whitley and Nancy Ireson Elijah Pierce’s America The Barnes Foundation, 2020

“After she learned the technique of the stitch she explored the traditional repertoire of patterns and colors, she went on to employ the stitch in a series of original embroidered pictures. With a needle and various yarns and threads, Mrs. James demonstrates the range of imaginative composition, color and texture, which can be achieved with stitches. It may be noted that the intangibles of patience, skill and faultless taste are her ingredients for picture-making with the needle. Through the colcha stitch Rebecca James lets us see her deep affection for the people, scenes and skies of New Mexico. E. Boyd The Colcha Stitch: Embroideries by Rebecca James Museum of International Folk Art Santa Fe, New Mexico 5/19 – 9/8/1913, p3

“Ms. Tompkins’s ravishing quilts connect to several traditions, including African bark cloth paintings, American textiles and not least of all, modernist painting. But look, don’t think. These pictorial powerhouses are like multifaceted jewels spread flat before the eye yet turning in the light, their sparkling shards of color and mutating geometries full of mystery and life. “ Roberta Smith New York Times 11/29/2002

“Awa Tsireh’s drawings are in their field, as precise and sophisticated as aPersian miniature. The technique that has produced pottery designs as perfect as those of an Etrucsan vase has gone into his training.” New York Times 9/6/1925

Po-qui-Tsireh (c. 1923- ) “There is no mention of (Tomacito Vigil) Po-qui-Tsireh of San Ildefonso Pueble in any of the published books on Native artists that we have consulted, however, his name appears in a PhD Dissertation for the University of Texas, Austin, in 2011. It is simply a line entry with his name and that he spent two years at the Santa Fe Indian School in 1936-37. It is doubtful that this student pursued art as a career following his two years at the Santa Fe Indian School. Had he done so, he would be documented in several publications. The only example of his work was certainly one of his early paintings, having been completed when he was only 13 years old.” Alexander E. Anthony Jr. Santa Fe, New Mexico