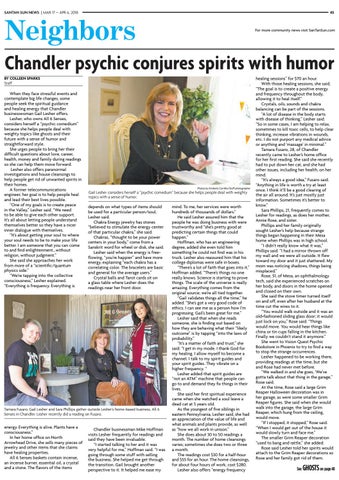 When they face stressful events and contemplate big life changes, some people seek the spiritual guidance and healing energy that Chandler businesswoman Gail Lesher offers. Lesher, who owns All 6 Senses, considers herself a “psychic comedium” because she helps people deal with weighty topics like ghosts and their future with a sense of humor and straightforward style. She urges people to bring her their difficult questions about love, career, health, money and family during readings so she can help them move forward. Lesher also offers paranormal investigations and house cleansings to help people get rid of unwanted spirits in their homes. A former telecommunications engineer, her goal is to help people heal and lead their best lives possible. “One of my goals is to create peace in the Valley,” Lesher said. “We need to be able to give each other support. It’s all about letting people understand themselves better so they have a nicer inner dialogue with themselves. “It’s about getting your soul to where your soul needs to be to make your life better. I am someone that you can come to and find enlightenment…without religion, without judgment.” She said she approaches her work from more of a “scientific/quantum physics side.” “We’re tapping into the collective consciousness,” Lesher explained. “Everything is frequency. Everything is

Gail Lesher considers herself a “psychic comedium” because she helps people deal with weighty topics with a sense of humor.

depends on what types of items should be used for a particular person/soul, Lesher said. Chakra Energy jewelry has stones “believed to stimulate the energy center of that particular chakra,” she said. Chakras, “thought to be your power centers in your body,” come from a Sanskrit word for wheel or disk, she said. Lesher said when the energy is freeflowing, “you’re happier” and have more energy, explaining “each chakra has a correlating color. The bracelets are basic and general for the average users.” Crystal balls and Tarot cards sit on a glass table where Lesher does the readings near her front door.

Tamara Fusaro, Gail Lesher and Sara Phillips gather outside Lesher’s home-based business, All 6 Senses in Chandler. Lesher recently did a reading on Fusaro.

energy. Everything is alive. Plants have a consciousness.” In her home office on North Arrowhead Drive, she sells many pieces of jewelry and other items that she claims have healing properties. All 6 Senses baskets contain incense, an incense burner, essential oil, a crystal and a stone. The flavors of the items

Chandler businessman Mike Hoffman visits Lesher frequently for readings and said they have been invaluable. “I started talking to her and it was very helpful for me,” Hoffman said. “I was going through some stuff with selling the business. She helped me get through the transition. Gail brought another perspective to it. It helped me ease my

mind. To me, her services were worth hundreds of thousands of dollars.” He said Lesher assured him that the people he was doing business with were trustworthy and “she’s pretty good at predicting certain things that could happen.” Hoffman, who has an engineering degree, added she even told him something he could not find was in his truck. Lesher also reassured him that his college diplomas were safe in boxes. “There’s a lot of faith that goes into it,” Hoffman added. “There’s things no one really knows. Science is starting to prove things. The scale of the universe is really amazing. Everything comes from the original source; we’re all tied together. “Gail validates things all the time,” he added. “She’s got a very good code of ethics. I can see me as a person how I’m progressing. Gail’s been great for me.” Lesher said that when she reads someone, she is finding out based on how they are behaving what their “likely outcome” is by tapping “into the laws of probability.” “It’s a matter of faith and trust,” she said. “I get in my mode. I thank God for my healing. I allow myself to become a channel. I talk to my spirit guides and your spirit guides. They vibrate on a higher frequency. “ Lesher added that spirit guides are “not an ATM” machine that people can go to and demand they fix things in their lives. She said her first spiritual experience came when she watched a soul leave a dead cat at 5 years old. As the youngest of five siblings in eastern Pennsylvania, Lesher said, she had an appreciation of the value of life and what animals and plants provide, as well as “how we all work in unison.” She does about 30 to 50 readings a month. The number of home cleansings varies; sometimes she does two or three a month. The readings cost $30 for a half-hour and $55 for an hour. The home cleansings, for about four hours of work, cost $280. Lesher also offers “energy frequency

healing sessions” for $70 an hour. With those healing sessions, she said, “The goal is to create a positive energy and frequency throughout the body, allowing it to heal itself.” Crystals, oils, sounds and chakra balancing can be part of the sessions. “A lot of disease in the body starts with disease of thinking,” Lesher said. “So in some cases, I am helping to relax, sometimes to kill toxic cells, to help clear thinking, increase vibrations in wounds, etc. I do not purport any medical advice or anything and ‘massage’ in minimal.” Tamara Fusaro, 28, of Chandler recently came to Lesher’s home office for her first reading. She said she recently had to put down her cat, and she had other issues, including her health, on her mind. “It’s always a good idea,” Fusaro said. “Anything in life is worth a try at least once. I think it’ll be a good clearing of the air all around. It’s just mostly just information. Sometimes it’s better to know.” Sara Phillips, 21, frequently comes to Lesher for readings, as does her mother, Annie Rose, and sister. Phillips and her family originally sought Lesher’s help because strange things began happening in their Mesa home when Phillips was in high school. “I didn’t really know what it was,” Phillips said. “I had a mirror thrown off my wall and we were all outside. It flew toward my door and it just shattered. My mom was noticing shadows, things being misplaced.” Rose, 51, of Mesa, an ophthalmology tech, said she experienced scratches on her body, and doors in the home opened and closed on their own. She said the stove timer turned itself on and off, even after her husband at the time cut the wires to it. “You would walk outside and it was an old-fashioned sliding glass door; it would just lock on you,” Rose said. “Things would move. You would hear things like china or tin cups falling in the kitchen. Finally we couldn’t stand it anymore.” She went to Vision Quest Psychic Bookstore in Phoenix to try to find a way to stop the strange occurrences. Lesher happened to be working there, providing readings at the time, but she and Rose had never met before. “We walked in and she goes, ‘We’ve gotta talk about that thing in the garage,” Rose said. At the time, Rose said a large Grim Reaper Halloween decoration was in her garage, as were some smaller Grim Reaper figures. She said when she would walk into the garage, the large Grim Reaper, which hung from the ceiling, would move. “If I stopped, it stopped,” Rose said. “When I would get out of the house it would slowly turn and face me.” The smaller Grim Reaper decoration “used to bang and rattle,” she added. Rose said Lesher told her spirits would attach to the Grim Reaper decorations so Rose and her family got rid of them. See