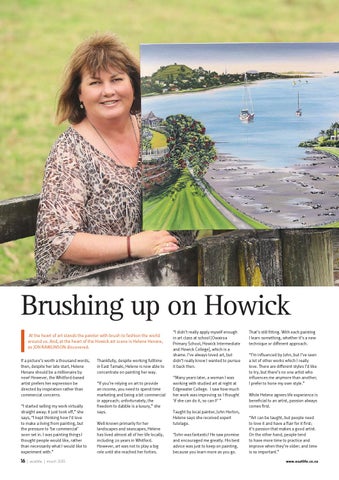 Brushing up on Howick At the heart of art stands the painter with brush to fashion the world around us. And, at the heart of the Howick art scene is Helene Henare, as JON RAWLINSON discovered. If a picture’s worth a thousand words, then, despite her late start, Helene Henare should be a millionaire by now! However, the Whitford-based artist prefers her expression be directed by inspiration rather than commercial concerns. “I started selling my work virtually straight away; it just took off,” she says, “I kept thinking how I’d love to make a living from painting, but the pressure to ‘be commercial’ soon set in. I was painting things I thought people would like, rather than necessarily what I would like to experiment with.”

Thankfully, despite working fulltime in East Tamaki, Helene is now able to concentrate on painting her way. “If you’re relying on art to provide an income, you need to spend time marketing and being a bit commercial in approach; unfortunately, the freedom to dabble is a luxury,” she says. Well-known primarily for her landscapes and seascapes, Helene has lived almost all of her life locally, including 20 years in Whitford. However, art was not to play a big role until she reached her forties.

“I didn’t really apply myself enough in art class at school [Owairoa Primary School, Howick Intermediate and Howick College], which is a shame. I’ve always loved art, but didn’t really know I wanted to pursue it back then. “Many years later, a woman I was working with studied art at night at Edgewater College. I saw how much her work was improving so I thought ‘if she can do it, so can I!’ ” Taught by local painter, John Horton, Helene says she received expert tutelage. “John was fantastic! He saw promise and encouraged me greatly. His best advice was just to keep on painting, because you learn more as you go.

That’s still fitting. With each painting I learn something, whether it’s a new technique or different approach. “I’m influenced by John, but I’ve seen a lot of other works which I really love. There are different styles I’d like to try, but there’s no one artist who influences me anymore than another; I prefer to hone my own style.” While Helene agrees life experience is beneficial to an artist, passion always comes first. “Art can be taught, but people need to love it and have a flair for it first; it’s passion that makes a good artist. On the other hand, people tend to have more time to practice and improve when they’re older; and time is so important.” www.eastlife.co.nz