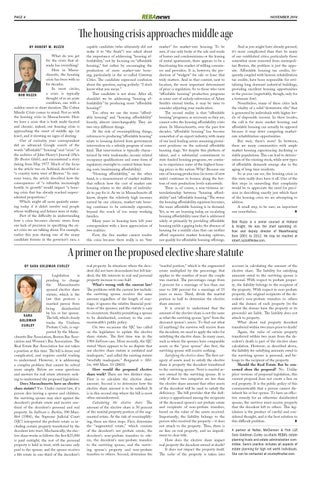 What do you get for the crisis that already has everything? Here in Massachusetts, the housing crisis has been with us for decades. In most circles, a crisis is typically BOB RUZZO thought of as an acute condition, one with a sudden onset or short duration. The Cuban Missile Crisis comes to mind. Not so with the housing crisis in Massachusetts. Here we have a crisis that is both multi-faceted and chronic; indeed, our housing crisis is approaching the onset of middle age (at least), and it showing no signs of abating. Out of curiosity, your correspondent did an advanced Google search of the words “affordable” “housing” and “crisis” in the archives of John Henry’s Journal (f/k/a The Boston Globe), and encountered a story dating from May 1977. Much of the focus in the article was on Ashland, described as “a country town west of Boston.” In ominous tones, the article described how the consequences of “a suburbia increasingly hostile to growth” would impact “a housing crisis that has already reached unprecedented proportions.” Which might all seem quaintly amusing today if it didn’t involve real people whose wellbeing and futures were at stake. Part of the difficulty in understanding how a crisis becomes chronic stems from our lack of precision in specifying the exact crisis we are talking about. For example, earlier this year during one of the many candidate forums in the governor’s race, a

capable candidate (who ultimately did not make it to “the finals”) was asked about the importance of addressing “housing affordability,” not by focusing on “affordable housing,” but rather by encouraging the production of more market-rate housing, particularly in the so-called Gateway Cities. The candidate expressed confusion about the question, saying politely: “I don’t know what you mean.” That candidate is not alone. After all, shouldn’t we be addressing “housing affordability” by producing more “affordable housing?” Too often we use the terms “affordable housing” and “housing affordability” loosely, almost interchangeably. They are two very different things. At the risk of oversimplifying things, references to producing “affordable housing” relate to housing derived from government intervention via a subsidy program of some kind. That intervention is typically characterized by twin trademarks: income related occupancy qualifications and some form of regulatory oversight to control future housing costs (maintaining affordability). “Housing affordability,” on the other hand, is a measurement of market realities that reflects how the cost of market rate housing relates to the ability of individuals to pay for it. As we in Massachusetts all know, despite the relatively high incomes earned by our citizens, market-rate housing continues to be extremely expensive, beyond the reach of too many working families. Many years in housing have left your correspondent with a keen appreciation of two realities: First, the free market cannot resolve this crisis because there really is no “free

And as you might have already guessed, it’s more complicated than that. In many of our established cities, particularly those somewhat more removed from metropolitan Boston, the problem is just the opposite. Affordable housing tax credits, frequently coupled with historic rehabilitation tax credits, have been responsible for revitalizing long dormant industrial buildings, providing excellent housing opportunities in the process (regrettably, though, only for a fortunate few). Nonetheless, many of these cities lack the vitality of a solid “downtown vibe” that is generated by individuals with higher levels of disposable income. In these locales, the call is for more market housing, and affordable housing can actually be opposed because it may deter competing marketrate rehabilitation opportunities. But wait, there’s more! In between, there are many communities with ample market housing experiencing declining or stable populations. This can lead to deterioration of the existing stock, while new types of affordable demands emerge due to the aging of long time residents. So as you can see, the housing crisis in this state really does have it all. One of the first steps in unraveling that complexity would be to appreciate the need for precision in describing exactly just which facet of the housing crisis we are attempting to address. A small step, to be sure; an important one nonetheless. t Bob Ruzzo is a senior counsel at Holland & Knight. He was the chief operating officer and deputy director of MassHousing from 2001 to 2012. He may be reached at robert.ruzzo@hklaw.com.

Legislation is pending to change the Massachusetts spousal elective share statute, which is the law that protects a married person from being disinherited by his or her spouse. SARA The bill, which closely GOLDMAN tracks the Uniform CURLEY Probate Code, is supported by the Massachusetts Bar Association, Boston Bar Association and Women’s Bar Association. The Real Estate Bar Association has not taken a position at this time. The bill is dense and complicated, and requires careful reading to understand. However, it is addressing a complex problem that cannot be solved more simply. Below are some questions and answers for real estate attorneys seeking to understand the proposed legislation. Does Massachusetts have an elective share statute? Yes. Under current law, if a person dies leaving a spouse and children, the surviving spouse may elect against the decedent’s probate estate and receive onethird of the decedent’s personal and real property. In Sullivan v. Burkin, 390 Mass. 864 (1984), the Supreme Judicial Court (SJC) interpreted the probate estate as including certain property transferred by the decedent into trust. Mechanically, the elective share works as follows: the first $25,000 is paid outright; the rest of the personal property is held in trust, with income only paid to the spouse; and the spouse receives a life estate in one-third of the decedent’s

real property. In situations where the decedent did not have descendants but left kindred, the life interests in real and personal property increase to one-half. What’s wrong with the current law? The problems with the current law include: the surviving spouse receives the same amount regardless of the length of marriage; it ignores the relative financial positions of the spouses; and the statute is easy to circumvent, thereby permitting a spouse to be disinherited, contrary to the commonwealth’s public policy. On two occasions the SJC has called on the legislature to update the elective share statute. The first time was in the 1984 Sullivan case. More recently, the SJC stated “there appears to be no dispute that our elective share statute is outdated and inadequate,” and called the existing statute “woefully inadequate.” Bongaards v. Millen, 440 Mass. 10 (2003). How would the proposed elective share work? There are two distinct steps. First is to calculate the elective share amount. Second is to determine how the elective share amount is to be satisfied. It is in this second step where the bill is most often misunderstood. Calculating the elective share: The amount of the elective share is 50 percent of the marital property portion of the augmented estate. At the risk of oversimplifying, there are three steps. First, determine the “augmented estate,” which consists of the decedent’s net probate estate, the decedent’s non-probate transfers to others, the decedent’s non-probate transfers to the surviving spouse, and the surviving spouse’s property and non-probate transfers to others. Second, determine the

account in calculating the amount of the elective share. The liability for satisfying amounts owed to the surviving spouse is personal. With respect to probate property, the liability belongs to the recipient of the property. With respect to non-probate property, the original recipients of the decedent’s non-probate transfers to others and the donees of such property (to the extent the donees have the property or its proceeds) are liable. The liability does not attach to property. What about real property decedent transferred within two years prior to death? Again, the value of certain property transferred within two years from the decedent’s death is part of the elective share calculation. However, as described above, the liability for satisfying amounts owed to the surviving spouse is personal, and belongs to the recipient of the property. Should the Real Estate Bar be concerned abou the proposal? No. Unlike prior versions of proposed legislation, this current proposal does not create a lien on real property. It is the public policy of this commonwealth that a person cannot disinherit his or her spouse. To have an effective remedy for an otherwise disinherited spouse, the survivor must receive property that the decedent left to others. This legislation is the product of careful and considered thought, and is the best solution to this difficult problem. t A partner at Nutter, McClennen & Fish LLP, Sara Goldman Curley co-chairs REBA’s estate planning trusts and estate administration committee. Sara’s practice includes all aspects of estate planning for high net worth individuals. She can be contacted at scurley@nutter.com.

Glovsky is resolved; coverage of the fall conference; and the Essex North registry joins the modern age.

Glovsky is resolved; coverage of the fall conference; and the Essex North registry joins the modern age.